Which one is the best notation for sodium acetate

I have seen two different notations for sodium acetate. The first one is:

The second one is:

Now I'm confused, which one is the best to use?

There is nothing wrong with either formula. And you can use even more:

It really depends on which point you want to bring across.

This formula, being analogous to formulae like $\ce{NaCl}$ stresses the inorganic salt view more. It shows that there is a cation ($\ce{Na+}$) and an anion ($\ce{CH3COO-}$) which form a salt crystal together much like the anion $\ce{Cl-}$ would do with the same cation. Inorganic nomenclature prefers cations to be written first.

Is basically the same except for saying ‘I don’t care how those seven atoms combine to form the anion, all I care for is what’s in there.’

This one stresses a more organic-chemical point of view where it’s relevant where the cation is actually bound to within the molecule. Oftentimes, organic chemists would even write structural formulae with a bond between oxygen and sodium as if it were hydrogen. The reasoning behind this is ‘I don’t care if the structure ends up being a salt, all I need to know is that the sodium somehow connects to the carboxyl group.’

Note that you can combine the first’s and the third’s idea to give $\ce{NaOOCCH3}$ which works, but is a lot less used than either of them.

This is the Beilstein-type lookup formula. You just know the elemental composition of your compound and now want to look it up — you can’t know whether it’s sodium acetate or sodium hydroxyethanalate (if that name is even correct). Or maybe you just don’t care. The reasoning behind this is $\ce{C}$ first, $\ce{H}$ second, the remaining elements following in alphabetic order.

Finally, there are also shortened formulae. The most common (the one I actually use most) would be $\ce{NaOAc}$. Here, $\ce{Ac}$ is an abbreviation for $\ce{H3C-C=O}$ where whatever follows or precedes is bound to the carbonyl carbon. Note that this formula is not considered standard, and would need to be included in a list of abbreviations or defined otherwise if you decide to use it.

Ok , both of the formulas are absolutely correct.It depends on what you want to signify , basically if you want to look from the point of view of organic chemistry then you take the second formula. And If you any to look from just the point of view of just ions then you can render the positive ion($\ce{Na+} $) to shifted first and then the negative ion($\ce{CH3COO-}$) .I think the second formula looks much more better because it is the usual notation for sodium acetate and my vote goes to the second.But if you want to show people something different you can obviously use the the first one.

Both are correct, but the second one is more commonly used. Actually, the way of writing a molecular formula signifies the structure of the molecule.

Let me explain: There are compounds that have the same molecular formula but have different structures. Such molecules are called structural isomers. An example for a carbon compound: 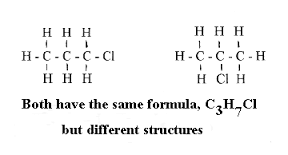 As you can see, even if both have the same formula they have different structures (they are structural isomers to say it precisely). Generally formulae of many compounds or molecules are written in a way so that they can signify the structure or arrangement of atoms in molecules.

Now look at that image again. If I want to write chemical formulae of both compounds that can signify their structures, I would write: $\ce{CH3CH2CH2Cl}$ for the first one, and the second one is $\ce{CH3CHClCH3}$.

I guess now you can understand that the way of writing a formula defines the structure of the compound, so always write the formula in a way that can define or give some hint about the structure.

Not the answer you're looking for? Browse other questions tagged notation or ask your own question.

5
Hill's system alphabetizes elements symbol or name?
1
Why is the chemical formula for vinegar CH3COOH what it is?
1
RCOH and RCHO Nomenclature
0
Can CH3COOH be written as C2H4O2?
0
Why is the chemical formula for ethanoic acid CH3COOH and not C2H4O2?
10
What is the structural formula of alkali hypohalite: MOX or MXO?
-3
Are CH₃COOH and HCOOCH₃ same?
-1
In the production of vinegar, where does water come from?
-3
Is there a difference between (HO)2 and H2O2?