Why starch (amylose) and cotton (cellulose) are so different?

Both amylose and cellulose have the same "monomer" structure (glucose), so what makes them look/form so differently? 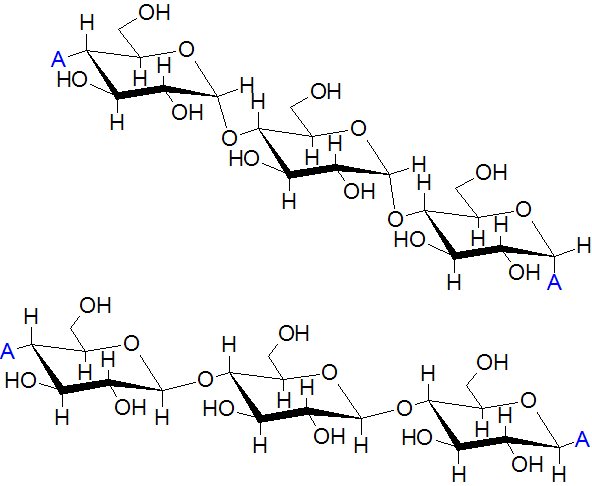 You can also add glyocogen to that list, a glycan found in us The difference is that cellulose has a linear structure, allowing parallel chains to lie in close proximity and for hydrogen bonding to predominate, strengthening the structure.. Starch, on the other hand, has side branches preventing as many hydrogen bonds from forming.

Note also that the site above shows very similar structures for starch and cellulose. The illustrations you've shown are using different methods to display the structure, emphasizing the cyclic nature in the first image, and the bond angles in the second. It would be interesting to see these molecules in atomic force microscopy, rather than in our conventional diagrams.

BTW, consider the different structure of carbon in diamond and graphite, where there is little bonding between layers of graphite, but diamond has three-dimensional strength.

Not the answer you're looking for? Browse other questions tagged organic-chemistry biochemistry polymers carbohydrates or ask your own question.

9
Why do polysaccharides consisting of alpha-glucose have helical structures?

6
What chemical properties make some grasses usable for producing textile fabrics?
7
Can I break starch down into glucose units?
4
Can a single monomer be a macromolecule? If so, when?
3
"Synthetic wood" from cellulose and lignin?
4
Bonding between amylopectin and amylose
9
Why do polysaccharides consisting of alpha-glucose have helical structures?
3
Gel filtration separation of cellulose, starch, oxytocin and palmitic acid
6
Why is fermentation of cellulose to produce biofuel and nutrients so difficult?
2
Why can't amylase digest glycogen?
2
Why don't proteins form branched polymers?