Concepts or references will be highly appreciated.

Rather than use the phrase "dimerization energy", which is the energy difference specific to two chemically identical species coming together, such as $\ce{2 BH3 -> B2H6}$, it is better to use the phrase interaction energy. See here and here for a detailed distinction between interaction energies and binding energies. I will simplify a bit some of the text there and in this answer.

The single point energy (SP energy, SPE) is the total energy of a system at one and only one configuration of the nuclear positions. In the case of two monomers (sometimes called fragments), the interaction energy will be the energy difference between the complex (sometimes called the supersystem) and the sum of the individual fragments or monomers at the same nuclear positions as in the complex. This gives rise to the equation

where there are two molecules, A and B, leading to three calculations, one for each of the monomers and one for the AB complex. In the dimerization of borane from above, or your specific example of the $\ce{HF}$ dimer, assuming that the internal coordinates (bond lengths, bond angles) of each monomer are identical, then the equation above can be simplified as A and B are identical:

To take your specific example of the $\ce{HF}$ dimer, you mention the role of the "orientation of atoms" in both the single point and dimerization energies. For a single monomer, assuming again that internal coordinates are not changing, the relative positions of the nuclei are not changing, and the total energy is invariant to translations and rotations. However, in the dimer or complex geometry, the relative orientation of one monomer to the other will change the total energy of the dimer, leading to a change in the interaction energy. For example, in addition to the linear form $\ce{F-H}\cdots\ce{F-H}$, you might be interested in the "flipped" versions $\ce{F-H}\cdots\ce{H-F}$ or $\ce{H-F}\cdots\ce{F-H}$, or forming a T-shape, etc. The interaction energy of each will tell you about the relative stability of that nuclear configuration relative to the other configurations.

The most important variables then in an interaction energy calculation are the relative orientation of the interaction species and the distance between each of the fragments. How do you decide this? Usually some intermolecular coordinate is scanned, such as the distance between closest atoms on the monomers, still while leaving the monomer internal coordinates fixed to give an unrelaxed potential energy surface scan.

For example, here is the interaction energy for the $\ce{F-H}\cdots\ce{F-H}$ configuration with a variety of methods using the cc-pVTZ basis set and an intraatomic distance of 0.927 angstroms, scanning the $\ce{H}\cdots\ce{F}$ distance: 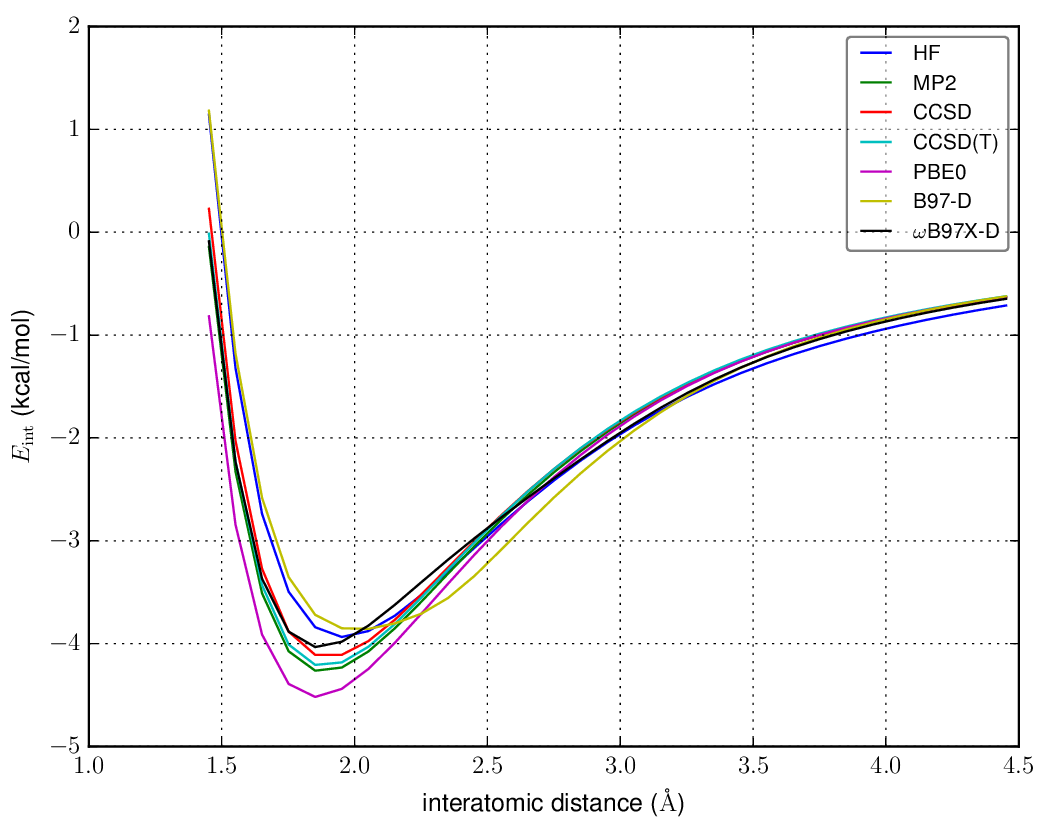 From a plot like this, we see that MP2 overestimates the interaction and CCSD underestimates it compared to CCSD(T); the shape of the B97-D potential is probably incorrect. HF is missing some repulsive interaction at long-range that the other methods include. It isn't dispersion, as the total dispersion interaction is always attractive and the minimum of the potential is qualitatively correct. You could certainly use any density functional or other method of your choice here (SCS-MP2, SOS-MP2, CISD, ...).

You could similar plots for other configurations, or choose a single method and place multiple configurations on the same plot (here, CCSD(T)/cc-pVTZ): 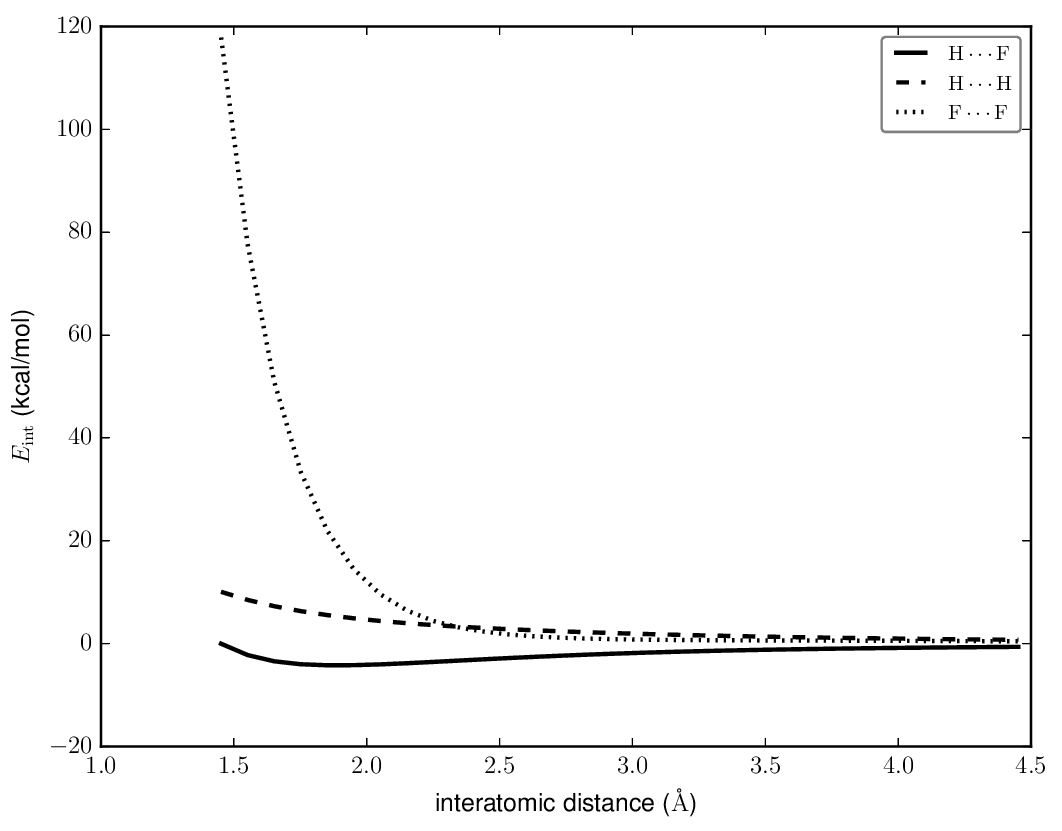 From a plot like this, it's pretty clear that only the $\ce{F-H}\cdots\ce{F-H}$ configuration is ever bound; it would be interesting to compare the T-shaped configurations to the linear ones.

You mention "electrostatic monomeric interactions", and we also see some interesting long-range behavior in plot 1. One of the most powerful techniques for understanding intermolecular interactions is symmetry-adapted perturbation theory (SAPT), which gives a decomposition of interaction energies in terms of electrostatics, Pauli exchange, polarization (called induction), dispersion, and charge transfer (though the definition of the latter is often ambiguous).

Here are each of the interaction energy components (SAPT0/jun-cc-pVTZ, monomer-centered basis): 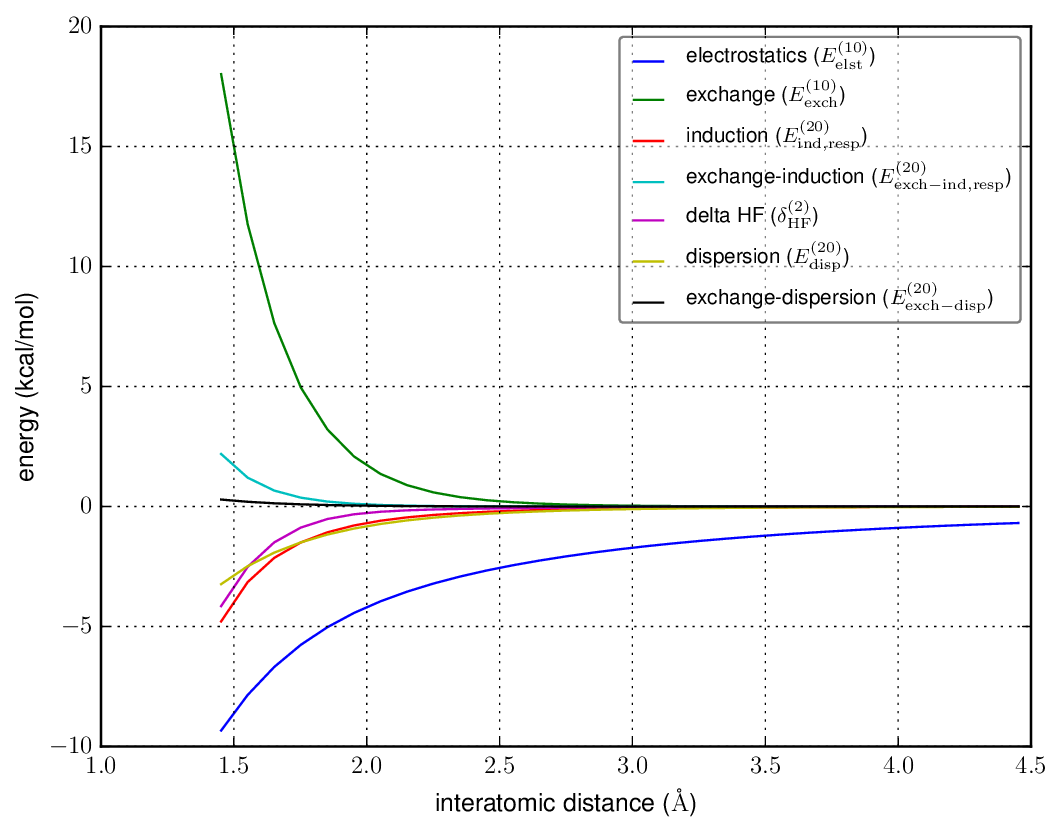 Combining all the electrostatic (1), exchange (1), induction(3), and dispersion (2) terms gives 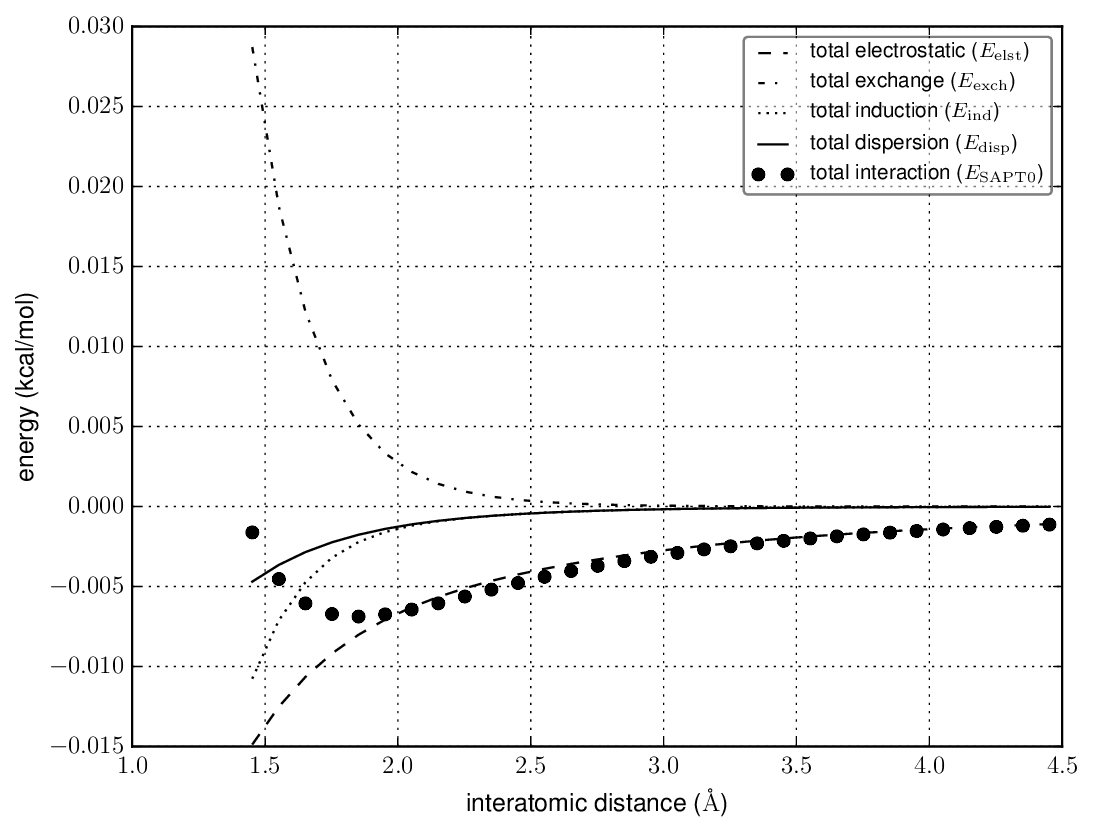 This makes it pretty clear that all points, $\ce{F-H}\cdots\ce{F-H}$ is bound mostly by electrostatic attraction, and dispersion is negligible. Maybe you knew that, but I didn't. My guess is that the presence of dynamic correlation in all the wavefunction methods damps the long-range electrostatics compared to Hartree-Fock.

All of these calculations were run with Psi4. None of the interaction or SAPT energies are CP-corrected.

Not the answer you're looking for? Browse other questions tagged computational-chemistry energy reference-request density-functional-theory or ask your own question.

25
How can I determine if there are π-π interactions between an amide and an aromatic ring in a protein?
8
Significance of single point energy when calculating interaction energies
6
How to calculate Lennard-Jones potential with quantum mechanical methods
3
What tools can be used to estimate binding energies?

28
Suggest methods and basis sets for a variety of systems
35
Is density functional theory an ab initio method?
1
Single Point Energy in Gaussian software
5
Computing reaction mechanisms using solvation effects
4
What is the "curse of dimensionality" in molecular dynamics?
4
Is it possible to perform ROMP2 numerical optimizations in Gaussian09?
5
Can I compare DFT calculations with different grids?
4
Potential Energy Curve from Hartree-Fock Calculations