When I draw cyclopropane it plots three molecular orbitals, but unfortunately it doesn't use the Walsh orbitals.

Are there any free online tools which can solve such the problem?

(It would be very nice if it would also be an android app. Please let me know if you know one.)

The reason why I want to do that:

Cyclopropane can, to a good approximation, be described with the following orbitals: 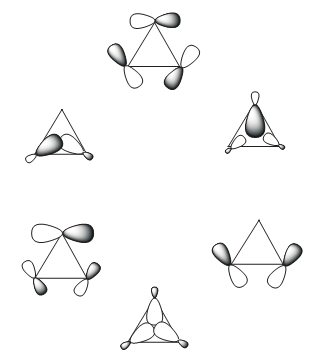 In the substituted case all energy levels are lying more down in energy.

I don't agree because I only see overlap with the Walsh Möbius set of $sp$ orbitals in the following sketch: 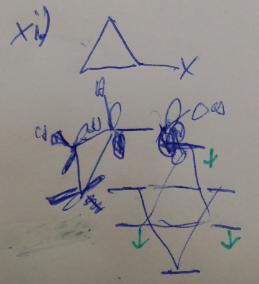 The Hückel set (a simpler way to put it: the energy lowest orbital in the scheme of cyclorpropane; used above) gives no overlap with the $p$ orbitals of an electron withdrawing group, e.g. X=COOH.

As I see from the orbitals' interaction, I believe the solution is wrong, I don't agree that all orbitals are lowered.

40
Why does cyclopropane react with bromine?

36
Natural Bond Orbital analysis: Significance of stabilization energy determined by 2nd order perturbation
32
Why does hyperconjugation help for ring cleavage?
17
Orbital correlation diagram for the cleavage of cyclopropylmethylene carbene
4
What is the reason behind neglecting & putting the overlap integrals $0$ in Simple Hückel Theory?
7
Significance of phase of atomic orbitals
19
Observability of Orbitals and Orbital Energies
9
MO Theory: Why do hydrogen and lithium bond, but hydrogen and helium don't?
10
Is there a single MO that represents the π system of a Möbius aromatic system? If so, what does it look like?
6
Explanation of the orbital energies resulting from Jahn-Teller distortion of octahedral complex using MO theory
4
Computational determination of the diagram of molecular orbitals of a polyatomic chemical species