Is the relative natural abundance of isotopes of an element the same everywhere?

Wherever you find potassium, the isotopes are present in a set percentage that exists the same everywhere in nature, but why is that? Does it have something to do with how the element is produced?

The relative natural abundance of isotopes is not the same everywhere. Depending upon what you mean by "everywhere", there are two cases to consider.

In these materials, deviations from "natural abundance" are sometimes measured in factors of 100

When our solar system was forming, elements and isotopes were not uniformly distributed - close to uniform, but not exactly uniform. This is due to processes like diffusion in which a mass-dependent fractionation occurs. A heavier isotope won't travel as far as a lighter isotope in a given amount of time, so the resulting distribution of the two isotopes will not be exactly equal. While these mass-dependent processes account for most of the isotopic variation in our solar system, mass-independent processes can play a smaller role. It is also suggested that catastrophic events in nearby stars may have also influenced local elemental and isotopic homogeneity. These "original" inhomogeneities will be further altered by a continuation of the mass-dependent (diffusion, bond-breaking and making, etc.) and -independent processes. Natural radioactive decay processes can also lead to changes in local isotope ratios. For example, $\ce{^238U}$ ultimately decays to $\ce{^206Pb}$, so it wouldn't be surprising to find an altered lead isotope ratio (e.g. enriched in $\ce{^206Pb}$) around large uranium deposits. 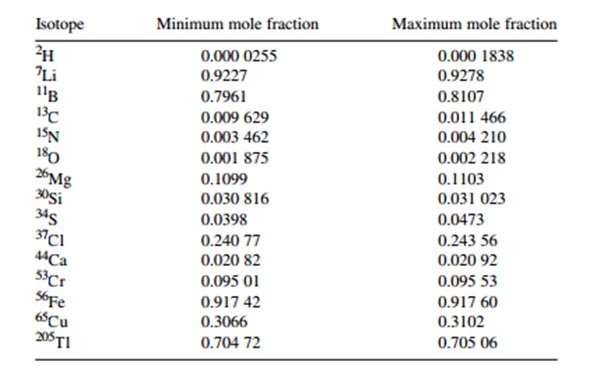 Short answer: it's not the same everywhere on earth.

Ron's answer is excellent, but the main point is that isotopic ratios vary from place to place and over time.

We can use these geographic variations with isotope analysis to track locations and dates of things.

The stable isotopic ratios of drinking water are a function of location, and the geology that the water percolates through. $\ce{^87Sr}$, $\ce{^88Sr}$ and oxygen isotope variations are different all over the world. These differences in isotopic ratio are then biologically 'set' in our hair as it grows and it has therefore become possible to identify recent geographic histories by the analysis of hair strands. For example, it could be possible to identify whether a terrorist suspect had recently been to a particular location from hair analysis.

Similarly, explosives and other compounds are tested for isotopic ratios to determine their origin (e.g., if the material at a crime scene matches the isotopes in a suspect's house).

Not the answer you're looking for? Browse other questions tagged elements isotope or ask your own question.

1
Do we have a reasonable assurance that relative atomic mass is constant throughout the universe?
0
Do most elements generally exist in a planet during early formation, or is it a small subset?
1
How uniform is the distribution of elements in the universe?

9
What is the formula for finding the average atomic mass of an element based on the abundance of its isotopes?
1
What is the Natural abundance of Potassium
27
How come uranium's relative atomic mass is 238.03 when it only contains isotopes with a mass number of 238 or less?
11
Can isotopes of a given element be represented by different symbols?
5
Where can I find ranges of isotope abundances?
11
Is it possible to find the ratio of isotopes only given the mean mass number?
7
Why do higher-mass isotopes have higher melting and boiling points than lower-mass isotopes?
1
Can the enrichment of Uranium be done via manipulating the boiling/melting point difference between differing isotopes of the same element?