Why doesn't the SeO2 oxidation of ketones stop at the hydroxyketone stage? 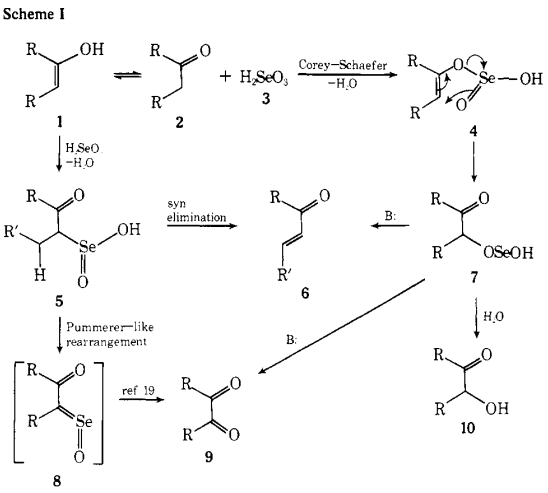 As noted in the cited paper by Sharpless and Gordon$^{[1]}$, the problem with the Corey$-$Schaefer mechanism is the existence of the selenous ester (7) which, due to its instability, would undergo hydrolysis prior to any elimination reaction.

A study by Qingjiang Li and Tochtrop$^{[2]}$ supports Sharpless and Gordon's counterargument. The former pair give a good overview of the hypotheses put forward up to that point (i.e., 2014). 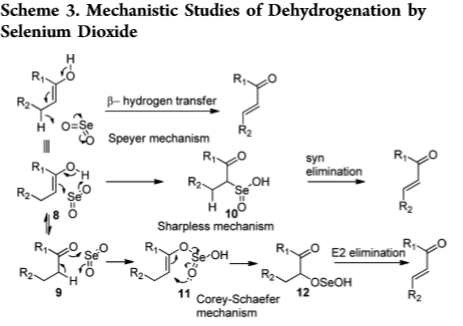 Based on the logic of the proposed mechanism, we reasoned that replacement of $\beta$-hydrogens of the substrate with deuterium would result in a ﬁrst-order isotope eﬀect in the reaction rate.

Consequently, a $\beta$-deuterated fatty acid was prepared ... and converted to triﬂuoromethyl ketone to react with selenium dioxide. The reaction rate was monitored by NMR and compared with that of the analogous fatty acid without deuterium.$^{[2]}$

Based on this experiment, Li and Tochtrop conclude$^{[2]}$,

No signiﬁcant diﬀerence in reaction rates was observed, which suggested that the removal of $\beta$-hydrogen to form a carbon−carbon double bond is not likely to be the rate-limiting step, and we therefore excluded the $\beta$-hydrogen transfer mechanism.

Verdict: not the best explanation.

While solving the selenous ester controversy, Li and Tochtrop found other problems introduced by Sharpless and Gordon.

[A]dding acid should accelerate the Sharpless mechanism by accelerating the enol−ketone tautomerization, as the rate limiting step is electrophilic attack of selenium dioxide to the enol. Since no signiﬁcant increase of the reaction rate was observed when adding acetic acid to the reaction mixture, the Corey−Schaefer mechanism seemed more reasonable.$^{[2]}$

To additionally verify this result,

$1.2$ equivalents of $\ce{Ti(O^iPr)4}$, a strong Lewis acid to coordinate with the carbonyl group, was added to the triﬂuoromethyl ketone for $1\ \mathrm{h}$ prior to selenium dioxide addition. This experiment resulted in no reaction, which subsequently served as further evidence that the reaction initiates with the ketone instead of the enol.$^{[2]}$

The Sharpless$-$Gordon mechanism also fails to explain some products detected in Li and Tochtrop's work with carboxylic acids.$^{[2]}$

Verdict: not the best explanation.

Verdict: not the best explanation due to the selenous ester intermediate.$^{[1]\ [2]}$

Li and Tochtrop came up with a fourth mechanism to account for experimental evidence. Here, the reaction initiates via the ketone. The further pathway is dictated by whether $1$,$4$-elimination is restricted.$^{[2]}$

Li and Tochtrop examplify their mechanism with a trifluoromethylketone that has varying radicals attached to the non-fluorinated $\alpha$-carbon.$^{[2]}$

As shown in Scheme $5$, we propose that high valence selenium reacts with triﬂuoromethyl ketone to form the enol ester $(\bf{17})$. The enol ester undergoes $1$,$4$-elimination directly instead of nucleophilic attack of the carbon−carbon double bond to form selenium ester.$^{[2]}$

In the context of the Li$-$Tochtrop mechanism, we can thus answer OP's original question.

The $\alpha$-hydroxyketone (10) is not observed. Why is that so?

The intermediate (4) has a small hydrogen attached to the original $\alpha$-carbon. In other words, $\ce{R2 = H}$. The $1$,$4$-elimination is not restricted. Hence, nucleophilic attack of the $\ce{C=C}$-bond does not take place.

The mechanism by Li and Tochtrop is also useful because it explains, to an extent, the dependence of the end product upon the starting material. Solvent and $\mathrm{pH}$ effects still have to be considered, and the pathway that yields diketones is not covered.

The nature of the starting material seems to have a great influence on the course of the reaction but usually one of the two types of compounds can be specifically obtained by using the right solvent. For example, dioxane favors the formation of the dione whereas t-butanol favors the unsaturated carbonyl compound.$^{[3]}$

Some information on how to eliminate sidereactions that lead to diketones can be found here:

13
Why do oxidation numbers work?
15
What is the mechanism for oxidation of ketones by the Popoff's rule?
10
Mechanism of the oxidation of alcohols with KMnO4
2
Oxidation of acetone using SeO2
5
Why does the Rosenmund reduction stop at the aldehyde stage?
6
Is the effect of hydroperoxyl radicals significant in the oxidation of organic compounds in the Fenton reaction? Why or why not?
0
Baeyer-Villiger Oxidation restricted to Ketones
3
Oxidation of Unsymmetrical Ketones using Selenium Dioxide