My problem is with the following premise:

Many atoms gain/lose electrons with the hope of having the same number of electrons as the closest noble gas in the periodic table.

The book uses Potassium as an example. Looking at my table, the closest noble gas to Potassium is Argon, which has $18$ electrons. Therefore Potassium wants to lose one electron...

Nice, I get that. But then I noticed something odd about all the examples in my book: all the elements they picked are elements conveniently one or two steps away from a noble gas. They never picked an element in the middle of the table like, say, iron.

Iron has $26$ electrons. Its closest noble gas is Argon, which has $18$ electrons. So iron wants to lose $8$ electrons (becoming a cation):

Is this correct? My book literally avoids picking elements in the middle of the table, so I feel there's something weird about this.

Also, I noticed that in every example, the book mentions the Group of the element (Potassium is group 1A, etc...). How is that even relevant? All you have to do is count the number of electrons, no?

The book's explanation about a noble gas configuration is somewhat accurate, but fairly incomplete.

The elements on the right and on the left of the periodic table (the alkali (earth) metals, the halogens, the chalcogens (the group that starts with Oxygen) and the pnictogens (Nitrogen group)) have electron configurations that make it somewhat easier to lose/gain electrons to "look" like noble gasses (this is why alkali metals and halogens are so reactive: the destabilization from the charge is very minimal compared to the stability of the electron configuration).

However, as you have observed, the book goes to some effort to avoid talking about transition metals. There is a reason for that.

Noble gas configurations are a subset of the stable configurations of electrons. In reality, what's actually being aimed for is an element with no incomplete electron shells.

What is an electron shell? The actual quantum mechanical definition may be a bit more complicated than you need, but for your purposes, it suffices to say that it's how electrons will tend to be distributed around a nucleus. Note that this is extremely distinct from saying that the electron "orbits" the nucleus.

If you look at a periodic table, there are four general regions to look at: 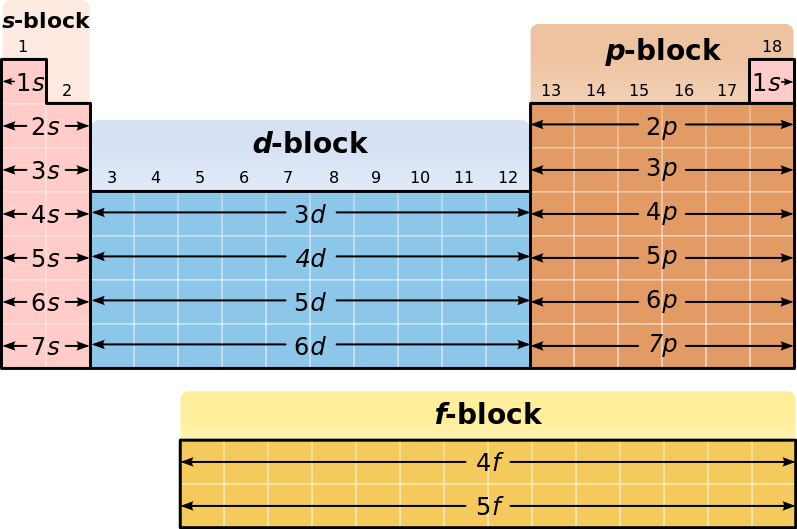 The labels "s", "p", "d", and "f" all refer to the various electron orbitals, and the blocks all indicate what the outermost (or "valence") shell is.

So while elements in the s and p blocks can lose a small number of electrons get complete shells (which will resemble the noble gases), transition metals are a bit more complicated. And by a bit more complicated, I mean that there are very rough rules in place that have almost more exceptions than they have actual examples of following the rule.

Not the answer you're looking for? Browse other questions tagged ions elements or ask your own question.

1
About combining a cation and an anion
0
In the carbonate anion, which atoms gain the two electrons?
4
For a copper/copper sulfate half reaction, do sulfate anions move to the anode and lose electrons?