Is there a maximum optical rotation of plane polarized light that can be observed using a polarimeter?

I understand that in a polarimeter, light passes through a filter that converts it into plane polarized light. This type of light only oscillates in one plane. When it is passed through an optically active solution, the plane is rotated due to interactions between the molecules. To measure this rotation, we use another a filter and try to orient it so that light passing through it appears brightest. The difference in angular orientations of the two filters is read as the observed angular rotation.

Here is an image I've taken from Solomon and Fryhle's Organic Chemistry textbook: 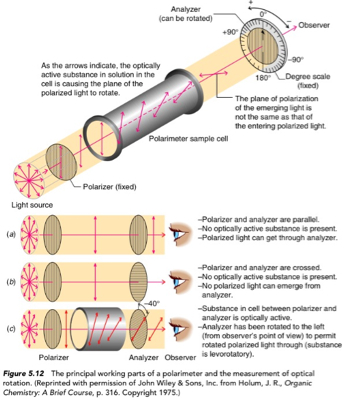 This is something I discovered after an attempt at a more mathematically rigorous investigation of how to interpret polarimetry results. It's not that hard, but I don't think you'll ever find a similar analysis in a book because in practice the details are pretty much unnecessary for experimental purposes (though fun mathematically!).

Before we begin, it's very important to distinguish two types of optical rotation. The first is the real optical rotation, $\alpha_{real}$. This is the twist which a substance actually causes on the plane of polarized light as it travels through the optically active solution, and therefore is the rotation which is part of the specific rotation equation, shown further below. The numerical value of this angle can be any finite real number, in degrees or radians. There is no constraint on how much an optically active solution is "allowed" to twist a plane of polarized light; the fact that you can't directly see how many complete twists the plane of polarized light made is entirely an experimental limitation.

This experimental limitation is what gives rise to the other type of rotation: the observed or apparent rotation, $\alpha_{obs}$. This is an angle which is also real number, but which is limited between $0$ and $180$ degrees or $0$ and $\pi$ radians (or you could say between $-90$ and $90$ degrees or $-\frac{\pi}{2}$ and $\frac{\pi}{2}$ radians, it makes no conceptual difference). The observed rotation is what you measure in a polarimeter, and in principle it cannot be directly put into the specific rotation equation.

Why is $\alpha_{obs}$ allowed only in the range $[0, 180]$ degrees? Because you can't observe a difference between an angle $\alpha_{obs}$ and $\alpha_{obs} + 180\times n$ (where $n$ is a positive or a negative integer). Look at a figure such as this (source) and try to convince yourself of this. If it helps, remember that two identical polarizers on top of eachother with an angle of $0^\circ$ let light through completely, but rotating one will block more and more light until they are perpendicular ($90^\circ$) and no light at all comes through, at which point increasing the angle will brighten the light until it reaches a maximum again at $180^\circ$ before once again starting to dim. This means that, in polarimetry the observed brightening or dimming by rotations of plane-polarized light are cyclic with period $180^\circ$, not $90^\circ$ as you suggest.

Turning the previous sentence into a simple equation, we obtain:

(The angles in this answer will always be treated in degrees, though for simplicity, in the equations I shall forget about the $^\circ$ unit and treat angles as pure numbers*).

Now we use the equation for optical rotation to find the specific rotation $[\alpha]^T_\lambda$, which characterizes a substance when measured at a temperature $T$ with a monochromatic light source of wavelength $\lambda$:

, where $l$ is the optical path and $c$ is the concentration of the (enantiomerically pure) optically active substance. Substituting that into the previous equation:

So for each individual measurement of $\alpha_{obs}$ made, there are infinite solutions for $[\alpha]^T_\lambda$. This comes as no surprise.

But if we take several measurements, then we can find a value of $[\alpha]^T_\lambda$ as a unique solution to the equation, right? Speaking in strictly mathematical terms, no. Any finite amount of measurements, even with perfect accuracy and precision, will still yield infinite possible values of $[\alpha]^T_\lambda$. In fact, there are infinite levorotatory and dextrorotatory solutions, so in principle you can't even determine the direction of rotation by this method! See the graph below: 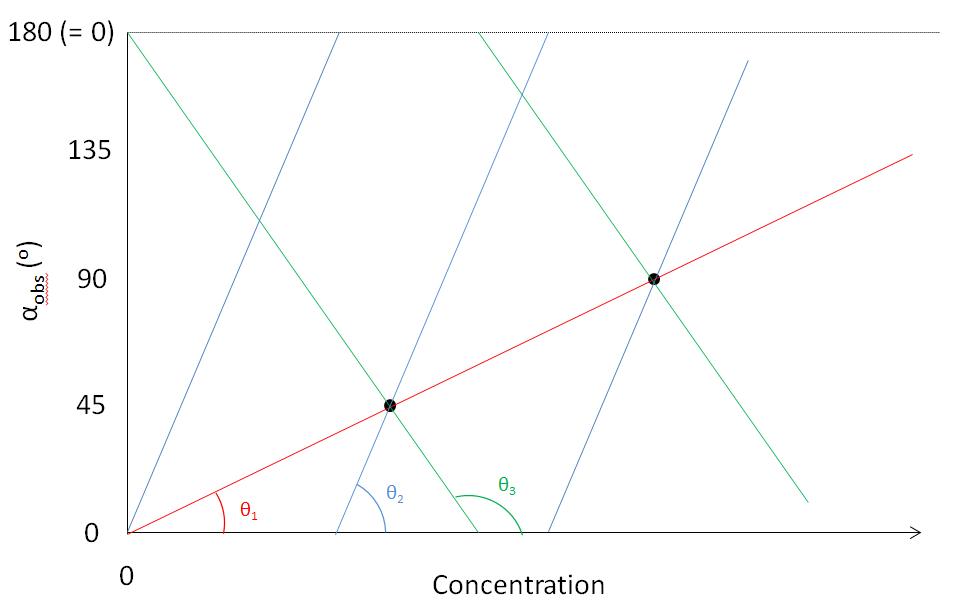 Note that since the measurements are cyclic with period $180^\circ$, straight lines wrap around. The two black points are two measurements of $\alpha_{obs}$ at two different concentrations. There is an "obvious" red line connecting them, but it need not be the correct one. There are infinite lines which cut both points; I have represented two more perfectly valid solutions with the green and blue lines. Each line which cuts all points represents a possible solution, with an inclination given by the angle $\theta = \mathrm{arctan}\ (l[\alpha]^T_\lambda)$ (see derivation above). From this, $[\alpha]^T_\lambda = \frac{\mathrm{tan}\ \theta}{l}$. Interestingly, the red and blue lines are represent dextrorotatory solutions to the problem, while the green line indicates a levorotatory solution for the same compound. There are infinite more solutions, characterized by steeper lines which wrap around more times. See the comments for information about how they come into play.

However, in practice, materials only have a finite and usually relatively small ability to perform optical rotation. Most of the more commonly encountered substances have a value of $[\alpha]^T_\lambda$ which tops out at a few hundreds. Some extreme examples are helicenes, for which specific optical rotations can reach as high as $\approx 10000^\circ$ in [13]helicene. After performing enough measurements (especially if you do them intelligently, by not measuring at different concentrations which are related to eachother by simple fractions), then you basically reach a situation where you can find an infinite family of solutions such as $[\alpha]^T_\lambda = -534 + 462785\times n$, in which case the true specific rotation is probably levorotatory with a value of just $-534^\circ$.

As a small additional comment, usually the filters in an optical polarimeter are rotated until the least amount of light comes through as the human eye is better at detecting small differences in light levels in darker conditions, which will make for a more accurate measurement of the observed rotation.

Originally I had answered this question by bringing up modular arithmetic, but while it's interesting it can possibly make the answer harder to understand at first. I have relocated my previous argument here.

The first equation shown is equivalent to:

The $\mathrm{mod\ 180}$ part comes from modular arithmetic, which may sound scary and new, but it's just normal mathematics, with the small quirk that every time a number appears out of the range $[0, 180]$, you just add or subtract $180$ as many times as necessary for the answer to appear between $0$ and $180$.

* In reality some of the $\alpha_{real}$ and $\alpha_{obs}$ variables in certain equations above would have to be divided by $^\circ$, so that all equalities are dimensionally valid. Equivalently, the modulus could be expressed with the unit as $\mathrm{mod\ 180^\circ}$, but I'm not sure if the modulus is allowed to have physical dimensions, even if I don't see any issue with it.

Not the answer you're looking for? Browse other questions tagged analytical-chemistry stereochemistry chirality optical-properties or ask your own question.

6
What compound has the strongest optical rotation of polarised light?

22
Molecular chirality and optical rotation
8
Does inversion of configuration necessitate reversed optical rotation?
1
optical rotation of styrene oxide
2
Can chiral atoms have same substituents but with different orientations?
2
Why do chiral biological molecules only exist as one enantiomer? Does it have any advantage?
1
Is specific rotation defined for mixtures of enantiomers or meso compounds?
12
What is the difference between quantities reported as optical rotation and circular birefringence?