Are the p orbitals of the biradical dioxo compound in the HOMO perpendicular to the plane?

I tried to draw the frontier molecular orbitals of the following biradical structure: 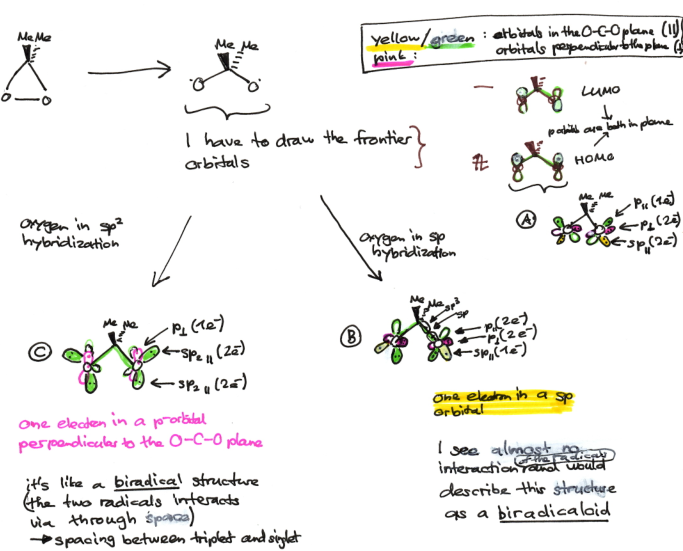 (A) At the top I've drawn the HOMO and LUMO, because I know that the reaction coordinate belongs to the $\ce{C_{$2v$}}$ point group. These two orbitals of the HOMO (green) lies in the O-C-O plane. In each $p$ orbital I would locate one electron (triplett state is favoured because of Hunds rule). Oxygen has six valence electrons, so I must bring four electrons in orbitals of each oxygen. I can place two electrons in a $p$ orbital perpendicular to the greenish depicted orbital. Then I would place the other two electrons in a $sp$ hybrid orbital.

(B) In the second possibility (at the right at the bottom) I also used a $sp$ hybridization for the oxygen atom. The two radicals are placed in the $p$ orbital perpendicular to the O-C-O plane. I guess the structure is less favoured than the first possibility (with the two radical in the O-C-O plane) because there are unfavoured filled-filled interactions between pink-pink and green-green while above there is onyl a pink-pink destabilizing interaction.

Are these reasons why the HOMO is best described by case (A)>(C)>(B)?

Probably this question has similiarties to the hybridization in a previous question (please note I'm a novice concerning hybridization) Why allene cannot be described with an allyl system?

I think you are asking what does the HOMO and LUMO of the 1,3-dioxabiradical look like.

These drawings just point out the conformational dependence of the HOMO and LUMO. Note that the two lone pairs on each oxygen have not entered the discussion. They are orthogonal to, and have no effect upon, the HOMO and LUMO orbitals.

We could refine our model by noting that, according to Bent's rule, we would expect the orbitals containing the oxygen lone pairs to have a bit more s-character that the carbon $\ce{C-H}$ orbital in cyclopropane. Therefore, in dioxirane and the corresponding 1,3-dioxabiradical, we would expect both the $\ce{O-O}$ bond and the orbital containing the single electron in the biradical to have even more p-character than $\ce{sp^{3.74}}$.

Again, however, to re-emphasize an earlier point, the lone pairs on oxygen have no bearing on our discussion. That said, if we would like to speculate on the hybridization of the orbitals containing the lone pairs, we may do so. Most texts tell us that the oxygen lone pairs in water, ethers and alcohols are in (roughly) $\ce{sp^3}$ orbitals. However data from photoelectron spectroscopy experiments seems to suggest that one lone pair is in (roughly) a p-orbital while the other lone pair is in an $\ce{sp}$ orbital.

94
What is Bent's rule?
46
Why does cyclopropane react with bromine?
8
Why allene cannot be described with an allyl system?
5
Through bond interaction in biradical dioxo compound and its correlation diagram

5
Through bond interaction in biradical dioxo compound and its correlation diagram
9
Is the hybridization only related to atomic orbitals but not to the molecular orbitals?
3
Hybridization of Cu2+ in tetraamminecopper(II) sulfate complex
7
How are the hybrid orbitals of sulfur hexafluoride shaped?
16
Are all degenerate d-orbitals identical?
1
Electron configuration of non-hybridized carbon