To anaesthetise the mucous membrane 2 separate drugs were given topically:

If instead having them in separate bottles they will be mixed in one, would it cause any interactions between them? 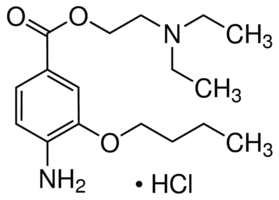 Looking at the functionality, oxybuprocaine looks more likely to react with itself rather than lidocaine. As it's a salt and also no doubt from numerous medical trials, this doesn't occur, the anticipation would be that the two compounds would be fine. The $pK_a$'s of the tertiary amines would also be expected to be similar, so one shouldn't neutralise the other.

Not the answer you're looking for? Browse other questions tagged organic-chemistry drugs or ask your own question.

2
Assay over 100% (L-Cysteine Hydrochloride Monohydrate)
2
Does HF react with ethanol?
10
Lanthanides react with mineral oil?
0
Propene react with ICl
0
Does limonene react with calcium hydroxide or acetic acid?
0
Can grignard reagents react with any electrophillic sites?