What's the bonding in the diborane(6)- hydrogen chloride dimer?

Then I faced a very interesting structure, something that I have never seen before. Something that turns up lesser than 50 results in Google, most of which are behind paywalls, and thus leave me in pain of not understanding this species. I'm talking about diborane - hydrogen chloride. 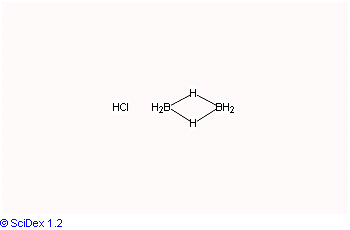 The bonding certainly doesn't seem ionic. What is the attraction force between $\ce{HCl}$ and $\ce{B2H6}$? There must be one or they wouldn't have written these two compounds together.

Edit: I'm specifically looking for the hydrogen chloride - diborane(6) dimer you can see in the image. And the Cl is pointing towards the H in diborane, so this isn't about dipole/induced dipole interactions. You can find more info about it in here. Interestingly, in calculating molar mass, both the $M$s of $\ce{HCl}$ and $\ce{B2H6}$ are taken into account.

I find this question to be quite interesting as it clearly pertains to non-covalent interactions.

Clearly, the dominant attractive force in each case is dispersion. The ClH-Dib complex exhibits the strongest interaction energy and contains a dipole that points from the diborane monomer to the chlorine. The HCl-Dib complex has an interaction energy that is about 1 kcal mol$^{-1}$ smaller in magnitude and exhibits a dipole pointing toward the diborane monomer. The analogous H$_2$O-HCl system is qualitatively similar to the HCl-Dib complex in terms of the magnitudes of the components to the interaction energy. Surprisingly, this dipole-dipole interaction is slightly weaker (by about 0.1 kcal mol$^{-1}$) than that seen in the dipole/induced-dipole system of HCl-Dib.

I have included below figures for the HCl-Dib, ClH-Dib, and H$_2$O-HCl complexes, respectively, with corresponding natural atomic charges shown on each atom.

Interestingly, when chlorine is pointed toward diborane (Figure 1), the natural atomic charges for diborane remain rather symmetrical and diborane barely exhibits an individual dipole moment. The H$\cdots$Cl separation between the two monomers is about 3.4 Angstroms, a long-range interaction. However, when chlorine is pointed away from diborane (Figure 2), the H$\cdots$H interaction is much smaller, exhibiting a separation of about 2.2 Angstroms. When considering water, the separation increases once again (Figure 3) to about 3.2 Angstroms.

The dominate attractive force to the interaction energy for these dimer systems is dispersion, though we see a competing contribution from electrostatics in ClH-Dib (Figure 2). Surprisingly, the orientation of the halogen significantly affects the geometry and energetics of these systems. When chlorine is oriented toward the two hydrogens, a weaker interaction and a larger inter-monomer separation is seen. However, when hydrogen is oriented toward the two hydrogens, the interaction energy increases in magnitude and the inter-monomer separation decreases.

I find it more convenient to address some of Martin's comments within the answer itself (sometimes responses can become quite long).

Which compound is lower in energy?

How stable are they wrt decomposition?

Have you tried asymmetric states?

I find it quite surprising, that the BH--ClH distance is much longer (0.6A) than the sum of the respective vdW radii, while the BH--HCl distance is about the sum of the vdW radii. Still, in both cases there should be (about) no contribution from the orbitals. How do the bond lengths change in the two conformations?

Can you make a rough comparison between the B--Cl distance in the two cases? They appear to be quite similar.

5
How do I model non-covalent interactions in Gaussian?

15
How should elements be colored? And how many bonds does an atom have?
2
Equation for the reaction of iodide to iodine using hydrogen peroxide under acidic conditions?
11
Why is electronegativity increasing with oxidation state increase?
15
How to explain the dipole moment anomaly of methyl fluoride and methyl chloride with respect to their hydracids?
3
Struvite crystals: how do they form?
7
Why do diluted sulfuric acid and hydrogen peroxide etch copper only when chloride ions are present?