Why isn't the silicon analogue of benzene flat?

Why isn't the silicon analogue of benzene flat? As far as I understand, silicon and carbon make similar structures and it doesn't make sense that its benzene analogue should be substantially different. 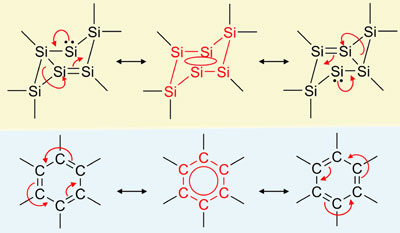 Quoted from the article:

Chemists in the UK have constructed a structural analogue of benzene made from silicon atoms. The molecule is not flat like benzene, but it reveals a new type of aromatic stabilisation.

This 'new' type of aromatic stabilisation is said to occur only around the seat of the chair structure.

I am thinking that silicon's bonds are too weak to be kept in a double bond, and therefore it doesn't have enough energy to change the shape of the bonding and is thus quite unstable.

The highly dispersed $\ce{^29Si}$ nuclear magnetic resonance shifts in solution ranging from +125 to ‚àí90 parts per million indicate an inhomogeneous electron distribution due to the dismutation of formal oxidation numbers as compared with that of benzene. Theoretical analysis reveals nonetheless the cyclic delocalization of six mobile electrons of the $\pi$-, $\sigma$- and non-bonding type across the central four-membered ring.

They point out that while $\ce{Si=Si}$ bonds were ignored for a long time, multiple compounds have been prepared, even including delocalization, like 1,2-disilabenzenes.

The surprisingly stable 3a can be exposed to air for hours as a solid or for minutes in solution without detectable changes.

Long story short, there is delocalization around the central 4-center ring:

Note that there is a 1,2-shift occurring, and that 2 $\ce{Si}$ atoms have two substituents, 2 have one substituent, and 2 have no substituents.

The paper argues that a fully planar hexasilabenzene might be possible, but:

the choice of precursor may be important in any synthetic approach.

Presumably the choice of substituent is also relevant to prevent the rearrangement here.

23
Why are silicon analogs of alkenes or alkynes so difficult to make?
5
Ring compounds of non-carbon atoms

2
Why does fusing benzene rings not produce polycyclic alkynes?
7
Azo coupling with arenediazonium salts - why isn't nitrogen gas lost?
5
If graphite's just a huge polymer of benzene why isn't it an aromatic compound (polymer?)
1
Why isn't this resonance possible in an imidazole ring?
4
The pyridine/benzene stability 'paradox'?
1
Why is bromobenzene more stable than benzene?
1
Synthesize the trisubstituted benzene