Why is the less substituted alkene favoured in Hofmann elimination?

In the reaction, $\ce{OH-}$ group attacks a hydrogen ion in an E2 reaction, forming a transition state in which simultaneously $\ce{NCH3}$ is removed. In this reaction, the $\ce{OH-}$ should attack, like in other case of E2 so as to form the Zaitsev product, but due to "steric hindrance" the less substituted alkene is formed. But surely the $\ce{OH-}$'s attack is not affected by $\ce{CH3}$ groups? It can be affected by the $\ce{NCH3}$ group - but whichever way it attacks, it's going at the beta carbon - so is at the same distance from that group in all cases. How can steric hindrance affect its attack? Why is the Hofmann product (less substituted product) favoured?

Breaking of the $\ce{C-H}$ bond and the $\ce{C-LeavingGroup}$ bond are roughly equally advanced, as is formation of the double bond. Because the 2 bonds are broken to roughly the same degree, it can be said that the E2 reaction is in the "middle" of the possible elimination mechanisms.

In the E1cb case, because breaking of the $\ce{C-H}$ bond is advanced, partial negative charge develops on the carbon where the proton is leaving from. Now primary carbanions are more stable than secondary carbanions, which, in turn, are more stable than tertiary carbanions (electron releasing alkyl groups will destabilize a negative charge). Therefore, when we have a choice of which proton to remove, we remove the proton on the least substituted carbon as this carbon will better stabilize the developing negative charge. As the LeavingGroup departs and the reaction completes, this will produce the olefin with the least substituted double bond, the Hofmann elimination product.

Sometimes it is argued that base size is responsible for elimination patterns and that when a large base is used the proton on the least hindered carbon is abstracted. This is true but the effect is relatively small. Changing the base from methoxide to t-butoxide only increases the amount of Hoffmann product by a modest 10-20% in simple haloalkanes.

So while sterics play a role, it is usually a small role with the electronic factors discussed above being more important.

For completeness, let me briefly mention the E1 elimination which is on the "other side" of the elimination spectrum of mechanisms. In this case, breaking of the $\ce{C-LeavingGroup}$ bond is advanced and partial positive charge develops on the carbon where the LeavingGroup is departing from.

I meant the pyrolytic elimination of quaternary ammonium hydroxide, which follows E2 mechanism

Here's another approach. Instead of electronic factors, let's look at steric factors - in this reaction they both lead to the same conclusion.

E2 eliminations prefer a trans or antiperiplanar geometry. Below are Newman projections of the 2 conformations with this geometrical arrangement of the substituents. 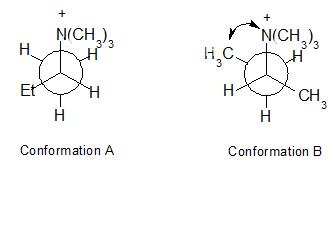 0
Hoffmann elimination of an amine
27
Why is 2-methylpropene less in energy than its alkene counterparts?
4
Why does the E1cb mechanism proceed in the specific way it does?
0
Major product of this Hoffman elimination?

5
Saytzev and Hofmann elimination in E1
16
Exocyclic vs. endocyclic double bonds in E1 elimination
5
Anti elimination from vinylic halides
9
Why does water attack the more substituted carbon in oxymercuration?
2
Why do more substituted alkenes undergo epoxidation, but the less substituted alkenes undergo hydrogenation?
1
Which will be major and minor alkene formed if E1 reaction occurs on 2-chloro-2,4,4-trimethylpentane?
4
Regioselectivity in the opening of 3-membered heterocycles