Why are Group 11 elements unreactive?

Group 11 metals namely $\ce{Cu, Ag, Au}$ are known for their low reactivities. They are thus rightly called coinage metals and have been historically used to make currency owing to this very property of theirs. My question is, what is the reason behind this behaviour?

Is it because of the stability of fully filled and half filled orbitals? But then the counterexample of $\ce{Cu-Zn}$ presents itself. These are neighbours in the periodic table, and the differentiating electron in each goes completes a full or half-filled orbital, yet $\ce{Zn}$ is quite reactive.

This behaviour can be seen (sort of) between $\ce{Hg-Au}$ as well which differ in one electron and yet are completely different in terms of their properties.

EDIT: The other two questions referred to as duplicates of this one cite different properties of the elements that make them unreactive. Gold has strong $\ce{Au-Au}$ bonds (due to relativistic effects) and $\ce{Zn}$ is more reducing than copper due to factors like hydration energy and the enthalpy of atomization. But this does not answer my question because:

The first step toward answering this question is understanding the extent to which the statement "Group 11 metals are unreactive" is or isn't true.

As stated in How do plants respond to copper deficiency? Plant Signaling and Behavior vol. 3, pages 231-232:

The transition metal copper is essential for all organisms.

It is not just that copper is present in every living thing. Copper is reacting in every living thing. Copper ions cycle between the +1 and +2 oxidation states in Plastocyanin, Copper/zinc superoxide dismutase and cytochrome oxidase. So as you are saying copper is unreactive, it as reacting in cytochrome oxidase in every mitochondrion of your body, and in Cu/Zn superoxide dismutase in the cytosol of cells through your body.

One way to quantify the reactivity of metal ions in through reduction potential, here listed for reduction of the ion to the zero oxidation state metal. (limiting to d-block metals at least as unreactive as Cu)

The overall trend in d-block metals, is down and to the right in the block is less reactive. The exception is that, for a given row, the group 12 metal is more reactive than the group 11 metal, but due to the formation of a 2+ ion, not a 1+ ion.

Next we should look at ionization energies of d-block metals to see how much of the reduction potential corresponds to properties of an individual atom, versus bulk or solvent effects.

Much of the reactive/unreactivity of d-block is explained by the increase of nuclear charge to the right and down the d-block. The complete d-shell of neutral group 11 atoms shields the valence s electron well enough that it may be removed to react. However, to lose 2 electrons, the group 11 elements would need to lose a d-electron from a completed d-shell, which is difficult. For group 12, two s valance electrons can be lost, and the complete d-shell maintained.

The classic paper of Dr. Norskov explained this phenomenon very well. (Off topic: Dr. Norskov is like the godfather of catalysis and I had a chance to meet him at a summer school and that was a great experience for me.)

The inertness of metal surface to adsorb depends on two factors:

Gold and Copper both has filled $d$ orbital ($d^{10})$. That means the main contributor to the reactivity of transition metal is totally absent here. 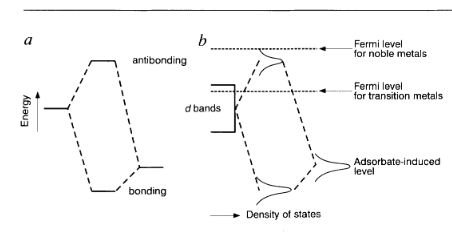 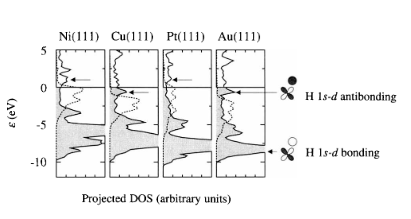 Fermi level is the energy level where the orbital has equal probability of being filled or unfilled (Fermi-Dirac statistics). From the left picture of the 1st picture you can see the energy profile. To better explain I tried to use some abstract numerical number to define the importance of anti-bonding orbital.

So the question is why the bonding + the anti-bonding energy > $A + B$. The reason is when an atomic orbital forms a molecular orbital, there is an energy penalty associated due to the orthogonalization of the orbitals. So, in case of $\ce{H2}$ formation, there is no electron in antibonding orbital, so total energy is reduced and that's why $\ce{H_2}$ is more stable than $\ce{H}$ atom; while in the case of $\ce{He}$, both bonding and anti-bonding orbitals are filled, so it's energetically more favorable for it to be in an isolated state.

Now, In $\ce{Cu}$ and $\ce{Au}$ the antibonding state is below the Fermi level, that means anti-bonding states are filled and that's why it is energetically unfavorable. But in case of $\ce{Ni}$ and $\ce{Pt}$ antibonding orbital is above Fermi level and hence the adsorption process is more favorable. There are some other terms to explain it from the quantum mechanics viewpoint (like the overlap matrix $V_{sd}^2$ and some other fundamental terms) but the basic idea is the DOS of bonding and anti-bonding orbitals are the main reason for this inertness.

I'm taking a stab at this.

Ok, so the issue with the group 11 metals, as far as I can see, is that while, yes, their s orbitals are not filled, they do not exist in isolation: they have neighbors who all have only 1 electron in them. So, they form very strong allotropes. In other words, gold would have been reactive, but there are other golds right there it can bond with and so share electrons with it. So the group 11 elements form large networks of allotropes, where electrons freely flow and are shared with other atoms of their kind. These bonds are very stable, and ergo, very hard to break. In fact, Au-Au bonds have been found to stabilize some very strange molecules: see here.

Not the answer you're looking for? Browse other questions tagged metal transition-metals or ask your own question.

34
Why is gold unreactive when only one electron is in the outer shell?
8
Why is zinc more reactive than copper?

10
Why is tantalum so unreactive?
6
Exceptions to the Madelung rule for electronic configurations
27
Why do the alkali metals form different products upon combustion in air?
1
What happens to the mobility of Group 1 elements going down the periodic table?
6
Why is the ground state electronic configuration of Group 10 (Ni group) elements so anomalous?