The wikipedia article on trinitromethane claims that:

There is some evidence that the anion (which obeys the $4n+2$ Hückel rule) is aromatic.

Unfortunately the citation is behind a paywall so I can't read it but my first obvious question is how can the trinitromethane anion obey Hückel's rule? Two of the requirements for the rule are that the molecule must be planar (or nearly planar) and must be cyclic and I fail to see how either of these conditions are satisfied since the anion is roughly trigonal pyramidal around the carbon and definitely not cyclic.

This appears to about Y-aromaticity. All the papers linked are behind paywalls for me so can someone please explain what Y-aromaticity is and how it applies to the example given. I found this previous answer which gives some discussion of Y-aromaticity in nitrate ions. If someone could provide a similar MO analysis of the trinitromethane anion this might be very interesting.

It is fairly obvious that the statement given by Wikipedia cannot be entirely correct.

There is some evidence that the anion (which obeys the 4​n+2 Hückel rule) is aromatic.

The trinitromethane anion cannot obey the Hückel (4​n+2) rule because it is neither monocyclic nor planar. And assigning a number of π electrons is fuzzy at best, so the (4​n+2) part is also questionable. Hückel's rule is a very strict set, but an aromatic compound does not necessarily have to fulfil it. The easiest compound to understand this is naphtalene, which is clearly aromatic, but does not fulfil the criteria of Hückel's rule, i.e. it is not monocyclic. In extension to this, helicene is an aromatic compound that fails two of the given conditions. Another case is thiophene, which due to the included sulfur certainly does not entirely consist of trigonally hybridised (sp2) atoms (see Bent's rule).[1]

But can the anion still be regarded as aromatic? In order to explain that, we need to look at the concept of Y-aromaticity.

The term and the concept is not without controversial discussion. It is an attempt to give the "traditional" concept of resonance energy an new, fancy and more catchy name. It is often used to explain the extraordinary stability of the guanidinium cation, which has tree equivalent resonance structures, i.e. the electronic ground state is heavily delocalised.
Conventional Lewis structures employ two electron two centre bonds only, which therefore cannot represent the highly delocalised electronic structures, e.g. of aromatic compounds. Hence the concept of resonance had to be introduced to account for such stabilising effects. Obviously the same holds true for any compounds, that exhibit excessively delocalised electronic structures.
The term Y-aromaticity has been used for compounds, that are Y-shaped, with a trigonal planar coordinated (carbon) centre. In addition to that the π orbitals hold six electrons.[2] These compounds have a similar orbital picture and could therefore be grouped.

The electronic structure of Y-delocalised π systems

The π orbitals of a trigonal planar coordinated centre can be generalised by the following orbital picture, which was generated for the nitrate anion at the DF-BP86/def2-SVP level of theory. 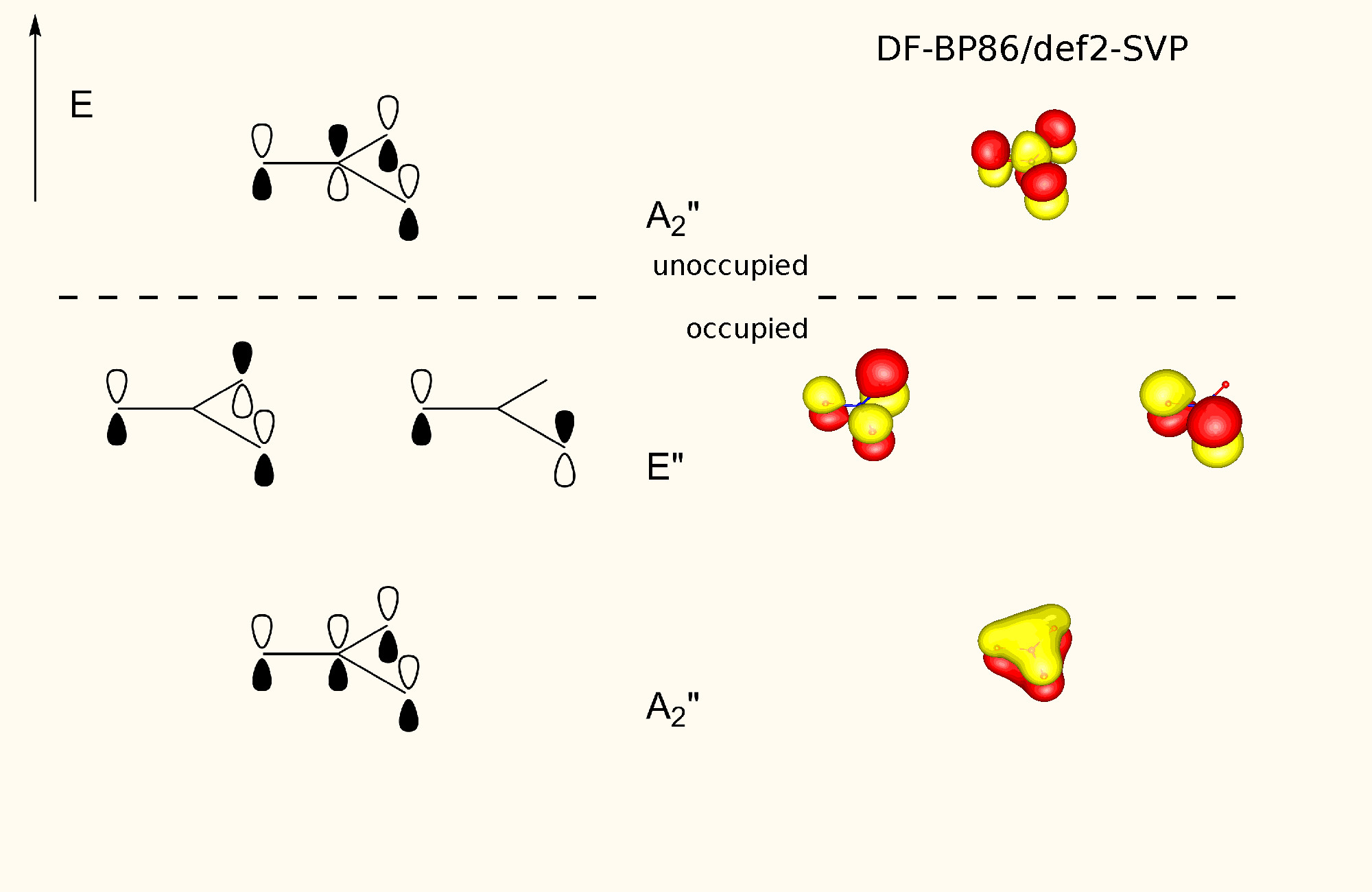 The remarkable stabilisation comes from the lowest lying π orbital, which is delocalised over all atoms, just like in the more obvious cases like benzene. Additionally, such compounds often retain their planarity by undergoing substitution reactions, rather than addition reactions.

Pro and contra of Y-aromaticity

The concept itself allows the discussion of certain electronic properties in quite simple terms. It is related enough to the general concept of aromaticity so that it can easily be understood at the same level of teaching. Like aromaticity, it allows predictions - to a certain degree - about the reactivity of such compounds.

Peter Grund makes the following assessment, arguing in favour of the concept of acyclic aromaticity.[3]

Despite recent trends, it would appear useful to designate systems as "aromatic" if they represent a delocalized system exhibiting peculiar chemical stability, in order to focus attention on such systems even when they are buried in complex structures. Since guanidine and its derivatives appear to possess really exceptional stability, and since their physical and chemical properties appear to be dominated by the tendency to retain the closed-shell, Y-delocalized 6 pi-electron configuration, we suggest that it is profitable to consider such substances as possessing a special type of "aromatic character," despite their acyclic nature.

For a general understanding of this feature it certainly does not hurt to keep it in the back of ones head.[4]

However, the applicability of this concept is limited to a quite small subset of compound (the same holds true for Hückel's rule, too). It therefore seems to be quite a superfluous concept, since it is in a more general sense already covered by resonance stabilisation.
After all, electronic structures are often not well enough described with simple models and in some cases these simple models can lead to wrong assumptions. This is one of these cases, where one can only use this concept as long as its restrictions are well known.

Some people might argue, that the naming itself is the problem and it may lead to confusion. I can partly agree with that. That does not change the fact, that the description in resonance, valence bond and molecular orbital theory terms will produce this result. In general I think the term aromaticity is unfortunate right in the beginnings. The concept has changed and extended quite a few times already. I often see problems when the term "Hückel rule" is used synonymously with aromaticity.

There is no true theoretical and at the same time all general explanation for aromaticity. It is often determined on a case by case basis experimentally. This limitation also has to apply to any derivations of it.

Trinitromethane is a quite acidic substance, which can in part be attributed to the presence of the well delocalised π system. Cioslowski et. al. have investigated the anion and came to this conclusion. In their paper they also use the term Y-aromaticity.[5]

Our calculations, however, show that at the HF/6-31G* level, the carbon atom is coplanar with the nitrogens while the oxygens of the nitro groups are rotated out of plane. The result is a structure with $D_3$ symmetry. The $\ce{C(CN)3^-}$ anion is likewise found to be planar, while the $\ce{CF3^-}$ ion exhibits a pyramidal geometry. In addition, we observe in $\ce{C(CN)3^-}$ a shortening of the carbon-carbon bond and a lengthening of the carbon-nitrogen bond relative to $\ce{CH(CN)3}$. We also find an analogous shortening of the carbon-nitrogen bond and lengthening of the nitrogen-oxygen bond in $\ce{C(NO2)3^-}$ relative to $\ce{CH(NO2)3}$. In contrast, the $\ce{C-F}$ bond length increases upon going from $\ce{CHF3}$ to $\ce{CF3^-}$. The planarity of the $\ce{C(NO2)3^-}$ and $\ce{C(CN)3^-}$ ions and the changes in bond lengths are obvious consequences of Y-aromaticity in these systems.

Obviously the bonding situation in the trinitromethane anion is a little more complicated than in guanidine, as the nitro group itself cannot be described by a single Lewis structure. The out of plane rotation of these groups further complicate things, but since the perpendicular $C_2$ axis is retained it is still somewhat possible to compare the resulting orbitals to a planar species. Therefore when you look at the orbitals you still find a remarkable resemblance to the picture above. For this purpose I have included the same schematic drawings next to the orbitals that resemble these best. 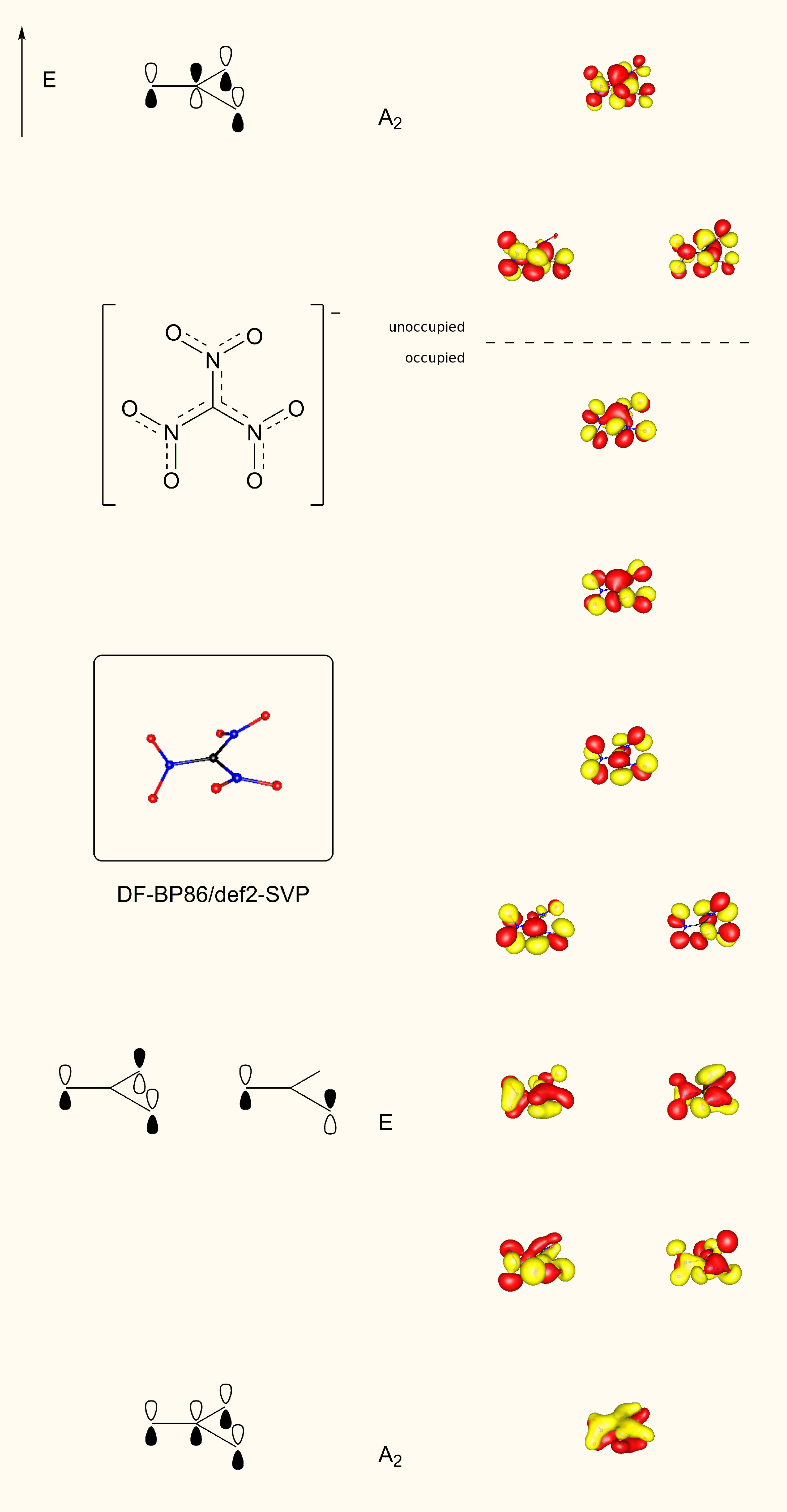 It is noteworthy, that because of the propeller structure there is no strict separation between σ and π orbitals, since the latter require a horizontal mirror plane, which is absent here.
But that is not all. Try counting the number of π electrons. This is far from trivial and it is in no case that makes sense six.[6] Don't let your brain explode about that fact, we are clearly dealing with a borderline case at this point.

And we have not even started to talk about the possibility of bonds between the oxygens of the nitro group.[7]

The trinitromethane anion has a strongly delocalised electronic system. It is extraordinarily stable due to this. If you accept the concept of Y-aromaticity as valid, then it is still a borderline case, where additional considerations have to be taken into account.

The Wikipedia article refers to a paper discussing so-called Y-aromaticity, a proposed extension of the idea of aromaticity to particularly stable non-cyclic structures.

This concept was proposed originally to explain the uncommon stability of the guanidinium cation. You can find some references in the Wikipedia article on aromaticity under "Atypical aromatic compounds". Whether this type of aromaticity really exists, however, is still somewhat controversial: other explanations have been proposed for the extra stability of guanidinium that do not necessarily require creating a new "type of aromaticity".

The conjugate base of trinitromethane is flat, symmetrical (trigonal), mesomerically stabilised and it has $4n+2$ electrons. Every nitro group has 4 π electrons in resonance (an oxygen lone pair and a double bond), and together with the anionic lone pair on carbon, makes for a total of 14 π electrons ($14 = 4\times3+2$). Therefore it may be considered Y-aromatic.

Generally, Y-aromaticity is a controversial concept, which says that in Y-shaped molecules additional stabilisation is present, analogous to the planar, cyclic compounds with $4n+2$ delocalised π electrons). Examples of such molecules include square and Y-shaped dications with 4 carbon atoms and one double bond. It seems that it still hasn't been proven as to whether it is really a valid concept.

94
What is Bent's rule?
48
Is buckminsterfullerene aromatic?
14
Is the S–O bond strength in sulfur trioxide or sulfite anion larger?
15
Utility of Bent's Rule - What can Bent's rule explain that other qualitative considerations cannot?
14
Why is the bond order in the SO₃ molecule 1.33 and not 2?
14
Delocalization of π-electrons in nitrate ion
8
Can a cyclic amine form an amide?
11
Are there any aromatic systems that don't contain any rings?
16
Why are tertiary carbocations so stable?
19
What is three dimensional aromaticity?
See more linked questions

13
Why do esters actually smell?
48
Is buckminsterfullerene aromatic?
2
Why is cyclopentadiene anion is aromatic but cycloheptatrienyl anion is not?
19
What is three dimensional aromaticity?
7
Why is porphyrin aromatic?
9
What is local and global aromaticity?