Can the Bohr atomic model be applied to sodium and other single valence electron species?

Is $\ce{Na}$ a single electron species and can I apply Bohr's Model on it? Please explain why not as it also contains one electron in its outermost shell.

One of the great successes of the Bohr model was the ability to explain the emission spectrum of hydrogen (and hydrogen-like monoelectronic ions), by allowing a simple theoretical derivation of the experimentally determined and remarkably accurate Rydberg formula:

$\lambda$ is the wavelength of light emitted, $R$ is a proportionality constant known as the Rydberg constant (which actually varies slightly with changes in atomic mass), $Z$ is the amount of positive charge attracting the electron (the nuclear charge in multiples of $q=1.6022\times 10^{-19}\ \mathrm{C}$), and $n_f$ and $n_i$ are positive integers (called quantum numbers) which previously had no experimental interpretation, but which now arise from the postulates of the Bohr model, being attributed to the concept of electron shells.

After this great new insight into atomic physics, naturally one would like to investigate how generally applicable the model is. Given the success in describing the emission spectra of hydrogen, one of the first places to look would be the spectra for other elements. So here they are: 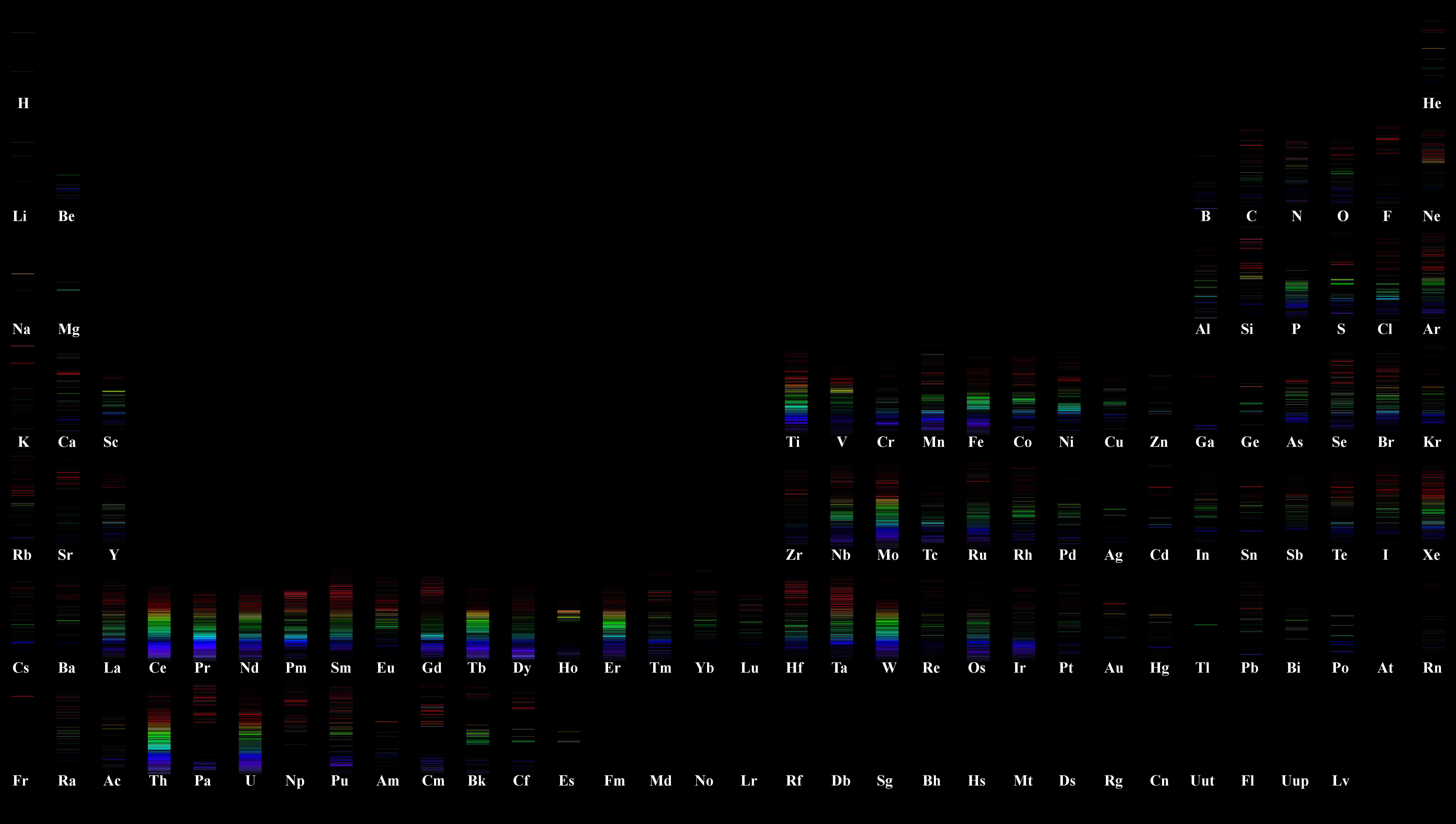 (Source - isn't it a beautiful image? Kudos to the designer! Open in a tab for gigantic resolution)

As you can see, most elements have rather elaborate spectra. After undoubtedly many frustrated attempts, it was found that the Bohr model, as accurate as it was for hydrogen, applied quite poorly to the rest of the elements, and no spectra could be reliably predicted.

However, the alkali metals stood out in that a modified version of the Bohr model had some success, producing a Rydberg-like formula, though salvaging it came at the cost of additional experimental parameter fitting, again with no theoretical background.

The formula for the energy of a electron in a hydrogen atom according to the Bohr model is:

For the alkali metals, the formula had to be modified to:

To keep the same structure, the mismatch between theory and experiment is brushed into the quantum numbers $n$, which are replaced by effective quantum numbers $n_{eff}$ that are no longer positive integers. To recover integer quantum numbers, a value called the quantum defect ($\delta_l$) had to be introduced. This value is different for each value of $n$, and also varies with another parameter $l$. This may seem like an arbitrary mathematical attempt to salvage the equation, but while the values of $\delta_l$ had to be tabulated, it was found that they were relatively constant with changes in $n$, and that there were a limited number of different cases ($l$ was a parameter limited to only a few values). The resulting Rydberg-like equation is:

While not as tidy as the result from the Bohr model, at least the equation can be used to approximately explain the atomic emission spectra for the alkali metals. Details of an experimental procedure for chemistry undergrads to determine the emission spectrum of sodium and apply the modified Rydberg formula can be found here, along with theoretical background.

Nowadays, we know why the alkali metals seemed to be a better fit to the Bohr model than the rest of the elements. With finer knowledge about the details of the electronic structure of atoms, borne out of the full quantum mechanical model of the atom, we know that alkali metals share an important property with hydrogen; they all possess a single electron in their outermost shell, i.e. have a valence shell configuration of $(ns)^1$. This is the only electron which is important in electronic transitions in the near-ultraviolet, visible and infrared regions of the electromagnetic spectrum, as the core electrons of the alkali metals are held much more tightly to the nucleus and require high energy photons to excite. This creates a much simpler spectrum.

Furthermore, atoms with multiple electrons suffer from electron-electron repulsions, which are not taken into account at all in the Bohr model, and thus are a significant source of error. However, in the alkali metals the consequences of these repulsions are simplified, as all electrons are in core shells, except the single valence electron. For all other multielectronic elements, electron-electron repulsions in the valence shell preclude a simple application of the Bohr model.

17
Definitions of autocatalysis
36
What is actually the difference between valence bond theory and molecular orbital theory?
15
Restricted open-shell versus unrestricted methods for open shell systems
4
Whats the symmetric, anti-symmetric and non-symmetric part of the direct product of irreducible representations?