How does one explain the trend in bond lengths and acidity of the following hydrocarbons?

Shouldn't the shorter bonds between $\ce{C-H}$ be easier to break than longer ones, making ethane the most acidic?

then the bond strength would indeed be the only deciding factor in the acidity of $\ce{HX}$, since the enthalpy change of that process is literally the bond dissociation energy.

However, acidity actually corresponds to the heterolytic dissociation of the $\ce{H-X}$ bond, with both electrons in the bond going to $\ce{X}$: 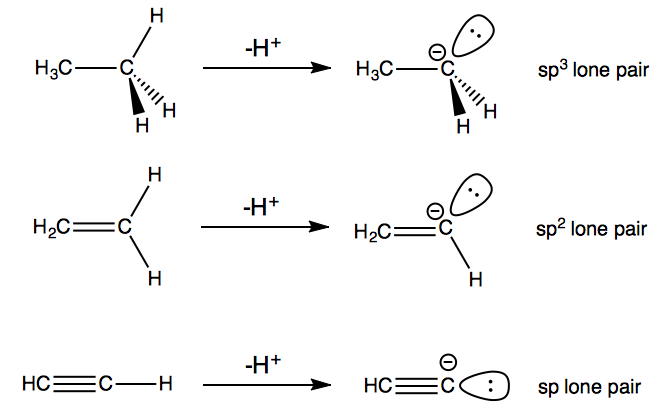 The acidity of terminal alkynes is in fact pretty useful from a synthetic viewpoint, since you can deprotonate them with a strong base like $\ce{NaNH2}$, forming a carbon-based nucleophile which can then be used to make new $\ce{C-C}$ bonds.

Not the answer you're looking for? Browse other questions tagged organic-chemistry acid-base bond hybridization or ask your own question.

3
C−H bond length in organic compounds
16
Predicting sigma bond overlap strengths of s-s, p-p, s-p, sp-sp etc
13
Why does acetylene, having an acidic proton, not react with strong bases like NaOH and KOH?
10
Reactions of alkynes with sodium/ammonia vs sodium amide
8
Why is ammonia more basic than acetonitrile
4
Which dicarboxylic acid has the most acidic hydrogen?
5
Which proton in cyclohexene is the most acidic?
3
Which would be more acidic, benzene or cyclohexane?
2
Why is an alkyne more acidic than an alkene? Or, why is acetylene more acidic than ethylene?
-1
Why do terminal alkynes have lower pKa values than non-terminal alkynes?
See more linked questions

27
Why are DCM and chloroform so resistant towards nucleophilic substitution?
8
If Alkynes can be reduced to Alkenes using Sodium in liquid ammonia, why can't Alkenes be reduced to Alkanes?
1
Reactivity of Alkanes, Alkenes, and Alkynes
2
How are alkanes, alkenes, and alkynes homologous series since they have no functional group attached?
7
Dependence of rates of neighbouring group participation on length of alkyl chain