What's the difference between a tetrahedron and a trigonal pyramid?

The shapes respectively denoted by 'tetrahedron' and 'trigonal pyramid' seem to be the same. Is there a difference between the two? If not, why are the two presented as different concepts in introductory chemistry courses?

In a rigorous geometrical sense, there is no difference between tetrahedron and trigonal pyramid--the terms both mean the same thing. In colloquial and chemical use, however, 'tetrahedron' typically implies the 'regular tetrahedron', where all four faces are equilateral triangles.

Chemically speaking, when referring to these two shapes as descriptors of molecular geometries, there is (usually) a central atom in addition to the four atoms at the vertices. In the symmetrically-proper regular-tetrahedral geometry, the central atom is inside the solid volume of the tetrahedron and equidistant from all of the four vertex atoms. In the trigonal pyramidal geometry, the central atom can be located inside the solid volume, contained within a plane of the trigonal pyramid/tetrahedron, or I believe even outside the tetrahedral volume.

A handy guide to visualise and explain the chemical differences between tetrahedron and trigonal pyramid geometries comes from the The Nobel Prize in Chemistry 1971: Gerhard Herzberg page: 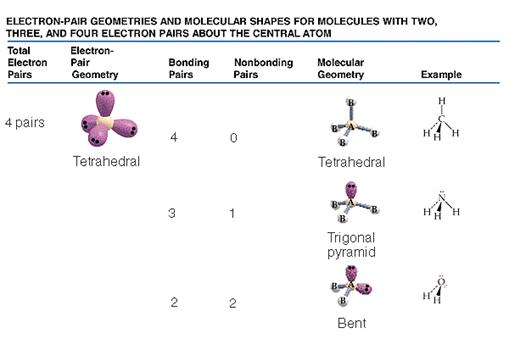 There is a handy explanation of the geometries in a YouTube clip referenced to Grand Valley State University: Molecular Geometry and Polarity: Tetrahedral (trigonal pyramidal)