The property F in an equation for chemical potential

While studying the lamba sensor that works on yttria-strabilised-zirconium (YSZ) I came across the following equation:

What is $F$ in this equation?

The "wall" of the lambda sensor is as shown in the picture with the voltage $V_{ref}$ measured across: 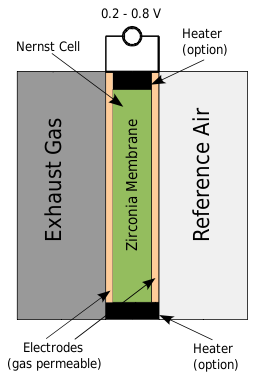 The equation apparently is derived directly from the chemical equilibrium (chemical potentials equals to zero):

They come to the following where they end at the final formula:

I understand the partial pressures. The gas constant $R$ and temperature $T$ are also clear. If I am correct, $V_{ref}$ is the voltage across the material of the sensor wall, as in the picture, so this is also clear.

physical-chemistry electrochemistry
share | improve this question | |
asked May 29 '15 at 13:49

A quick dimensional analysis confirms that this makes sense.

8
Why is it necessary to consider infinitesimal changes in p,V,T for H,U and G given that they're state functions?
7
How to find and use the Clausius-Clapeyron equation
6
Chemical potential of mixtures
4
Derivative of Gibbs Energy wrt Temperature at constant Internal Energy
1
Gas of independent molecules
9
Pressure turning out to be zero?
1
What is the entalphy change with respect to pressure at Isothermal Process for *Real Gases*?