Clarifications about the mechanism of the Wittig reaction [closed]

Ok so this is the proposed mechanism for the Wittig Reaction as stated by my textbook, LG Wade. I have some doubts regarding this mechanism:

1) Why is only triphenyl phosphine used here? Why not some stronger nucleophile like say trimethyl phosphine?

3) Why is butyllithium used particularly.Can't any other reagent be used to abstract H ?

Note: I'm just a beginner in organic chemistry (Org 2) so it would be helpful if you can keep adjust your answer to suit my level of understanding.

1) Why is only triphenyl phosphine used here. Why not some stronger nucleophile like say trimethyl phosphine?

Trialkyl phosphines can particpate in the Wittig reaction just fine, but they create some other problems. Let's say you were going to create the phosphonium salt from ethyl iodide and trimethyl phosphine. It would form in high yield, but in the next step where you deprotonate it and form the ylide you would have a problem. You could form the ylide from deprotonation of the desired ethyl group, or you could form an ylide by deprotonating any of the 3 methyl groups. This would give rise to a mixture of ylides and consequently a mixture of products. On the other hand, there are no protons on triphenyl phosphine that can be removed once the phosphonium salt is formed.

Triphenyl phosphine has the aromatic rings arranged in a non-planar, propeller-like geometry which makes delocalization less likely. Also $\ce{2p-3p}$ overlap would be involved which is not as effective as $\ce{2p-2p}$ overlap. 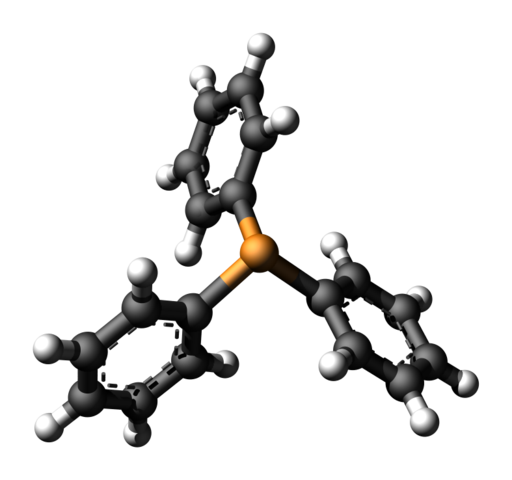 3) Why is butyllithium used particularly. Can't any other reagent be used to abstract H?

In the phosphonium salt, the protons alpha to phosphorous are not very acidic (pKa ~ 20-35), a strong base is required to remove them. Other strong bases could be used, but BuLi is commercially available in high purity at a reasonable cost. When BuLi abstracts the proton butane is formed and escapes as a gas - one less side product to worry about separating out.

The 4-membered ring may not be as strained as you imagine. Remember, phosphorous is in the third row of the Periodic Table. It has longer bond lengths and can tolerate smaller bond angles.

The bond between phosphorous and oxygen is an extremely strong bond, in other words its formation is very exothermic. Therefore, this last step is being driven by thermodynamics. It is the exothermicity of this step that drives the reaction to completion.

31
Why does the unstabilised Wittig reaction selectively form cis alkenes?

5
Photolysis of N-bromo compound in acidic conditions (radical cyclisation)
24
Which is the currently accepted mechanism of a Wittig reaction?
10
Mechanism of homologation of aldehyde to alkyne: Ohira–Bestmann reaction
12
Wittig versus Corey–Chaykovsky reaction
13
Ring opening of aziridinylmethyl and oxiranylmethyl radicals