Is ethanoic acid most acidic in DMSO, water or methanol?

I suspect that the conjugate base would be most stabilized by a polar protic solvent (meaning it's weakest in DMSO), however, water and methanol are both protic and polar. Which causes ethanoic acid to be most acidic lowest $\mathrm{p}K_\mathrm{a}$? This was asked in an exam question where the following $\mathrm{p}K_\mathrm{a}$ values were meant to be assigned to the acid in each of the solvents: $9.5$, $12.6$, $4.8$.

organic-chemistry acid-base
Share
Improve this question
edited May 19 '15 at 16:19

In general the acidity of a species in different solvents is affected by three factors:

Cation solvation: The difference in the stability of the conjugate acid of the solvent may be the factor that causes the difference between water and methanol. The $\mathrm{pK_a}$ of $\ce{CH3OH2+}$ is approximately -2.5 (several sources, none giving exact answers) and the $\mathrm{pK_a}$ of $\ce{H3O+}$ is -1.7. Therefore protonated methanol is less stable than protonated water and so this disfavours dissociation of the acid in methanol. This page claims that this can be attributed to oxygen $p$-orbital donation into $\ce{C-H}~\sigma^*$ orbitals but I don't have enough knowledge of MO theory to verify this (maybe someone else can).

Overall the greater acidity of ethanoic acid in water than methanol seems to be down to the greater dielectric constant of water and the greater stability of the solvent cation formed.

This page says some good things about the subject (some of my ideas were developed from reading this).

Additional reading: This paper looks to have some detail on the anion solvation aspect but I can't access the full text so I'll leave it as a link.

NOTE: When we say "holes" in the solvent, we literally mean the energy one would need to push aside the solvent molecules from each other to make a little hole big enough to put a single ethanoic acid molecule.

It's about the ability of a solvent to stabilize the neutral and charged species.

Water: $\ce{CH_3COOH}$ and its acid and conjugate base are all polar molecules/ions. Water stabilizes $\ce{CH_3COOH}$ by forming excellent dipole dipole and dipole-charge interactions (and highly symmetrically because water is symmetric). The $\ce{H^+}$ from the acid forms $\ce{H_3O^+}$ in water (also highly symmetric) and is also stabilized by $\ce{H_2O}$, so often you read about "proton hopping" in acidic aqueous solution, which also happens in methanol, but to much less extent. You can also say water's lone pairs are larger and less hindered than methanol's, or you could say that the sigma-like MO for water overlaps better (and more symmetrically) with incoming molecules than methanol's. High symmetry allows much better orbital mixing (via more degenerate MOs), lowering the energy of water and hydronium significantly.

Methanol: Methanol is polar and has a $\mathrm{p}K_\mathrm{a}$ (so I've heard) around water's. Methanol $\ce{O}$ atom can accommodate a proton and when it does, it is stabilized partly by hyperconjugation (a type of orbital mixing; see below for visual) but is not stabilized to the extent water is in part because methanol is not as symmetric (neutral or protonated) as water is = less MO mixing. Yet, methanol forms good dipole-dipole and dipole-charge stabilizing interactions.

DMSO: DMSO is polar, but aprotic, suggesting it does not hold on to protons very well. It can form dipole-dipole interactions, but the sulfoxide $\ce{S=O}$ part likely doesn't overlap very well in a "sigma way" (head-to-head), but in a "pi-way" resulting in weaker overlap.

A note to illustrate hyperconjugation:

If protonated methanol is stabilized, it is likely stabilized intramolecularly by hyperconjugation, which is electron overlap between the exposed (empty) $\mathrm{p}$-orbital on oxygen and the $\ce{C-H}$ sigma bond. 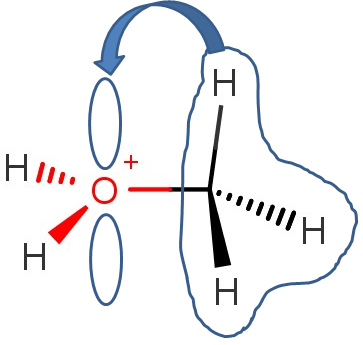 It will also be stabilized intermolecularly if surrounded by other polar electron-rich species (methanol, $\ce{CH_3COO^-}$ or $\ce{CH3COOH}$): These molecules will also temporarily donate electron density to the empty $\mathrm{p}$-orbital on the protonated methanol oxygen.

These effects combine to allow for methanol to harbour a proton, making it a little better base than one would think.

1
What are the enthalpy and entropy contributions to carboxylic acids dissociating in water?