Does a Grignard reagent react with enones to give the 1,2- or 1,4- product?

Where does the Grignard reagent add to?

The correct answer is the 1,2-addition product (i.e. the allylic alcohol 1). In general, Grignard reagents and organolithium reagents add directly to the carbonyl carbon, while organocuprates (organocopper reagents) add to the beta-position of an unsaturated ketone.

This exact transformation was reported by Akai and coworkers recently (Org. Lett. 2010, 12, 4900) and they obtained compound 1 in 95% yield (the supplementary information (PDF) is free).

The Grignard reaction, although very well examined, there are still arguments about the mechanism and the overall process. The reagent is usually best described via the Schlenk equilibrium, but that is not only dependent on $\ce{X}$, but also on the solvent:

There also have been some dimeric structures reported, i.e. the symmetrical, the asymmetrical, and the alkyl bridging dimer. According to Milton Orchin[1] (and references therein) the latter is responsible for the formation of the above equilibrium.

There are many mechanism possible, two of them following a non-radical pathway are depicted below. In both cases, the 1,2-addition leads to the major product. The six-membered transition state (top route) has been proposed many times and employs the alkyl bridging dimer.[2]

The bottom route considers only the monomeric Grignard reagent. Whichever pathway is taken, the result is the same: 1,2-addition, resulting in a tertiary alcohol, with the C=C double bond retained. 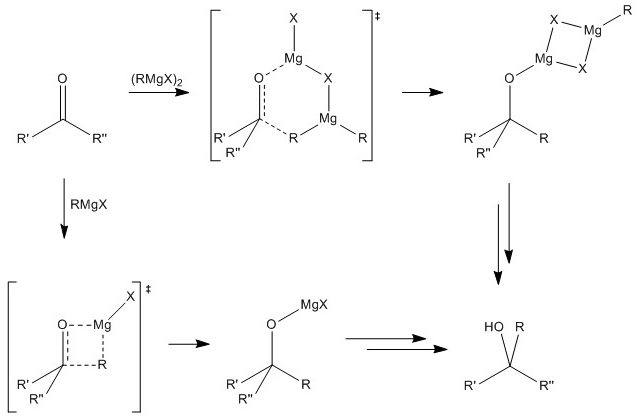 It has been correctly pointed out by ron that Grignard agents cannot coexist with acid, as my previous draft suggested. Even water poses a big threat to the stability, as pointed out by yasir. I was a little confused about this, because adding a $\ce{Cu(I)}$ co-catalyst will result in the 1,4-product,[3] and I assumed the same would happen with an acid.

Not the answer you're looking for? Browse other questions tagged organic-chemistry carbonyl-compounds grignard-reagent regioselectivity or ask your own question.

0
Which double bond will PhMgBr attack and why?
1
Why is direct addition not preferred in this reaction?
17
Reaction of perchloric acid with cyclopropenol
4
Reactions of Grignard Reagent: 1,2 vs 1,4 addition
3
Classes of Organometallic Compounds - Where do I put Grignard Reagents?