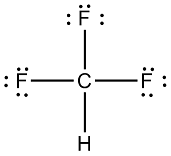 My first line of thought is that both of these molecules are symmetrical (the vectors from each individual atom naturally cancel each other out) with no lone pairs of electrons. Now I knew that just because they were symmetrical didn't automatically meant that they were non-polar. If they're symmetrical, they're usually non-polar but not always. This is one of those cases.

My next line of thought was that they both had to be polar and had dipole-dipole interactions. Then I later find out that the $\ce{CHF3}$ is actually the polar molecule with dipole-dipole interaction and $\ce{CF4}$ is the non-polar molecule with London-dispersion forces.
This bothered me a little bit because both of these molecules have a very electronegative atom (fluorine) that is more electronegative than any other element in the compound. This is why I thought they were both polar.

Draw the structures in 3D and then you will see why one is polar and the other not. 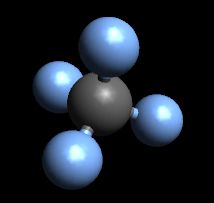 As you can see this molecules adopts a tetrahedral geometry which is perfectly symmetrical in every direction and so the dipoles of the four $\ce{C-F}$ bonds cancel out, leaving no overall dipole. 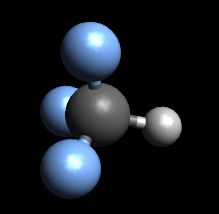 Although the molecule has some symmetries, it is not perfectly symmetrical. Since the dipoles of the $\ce{C-F}$ bonds are far larger than the basically non-existent dipole of the $\ce{C-H}$ bond, the dipoles do not cancel out and you are left with a molecule which has a notable net dipole moment of 1.649 D, with the negative end over the fluorines and the positive end over the hydrogen.

As general advice, when determining whether a molecule has a net dipole, always consider the molecule in 3D as opposed to just looking at individual bond dipoles.

‘Symmetry’ is a rather generalised concept. It isn’t so much the existence of symmetry in a molecule, but much more which type of symmetry we’re encountering.

From geometry classes, you should remember that there are planes and centres of symmetry. Alongside these, rotational axes, the identity and more exotic things like improper rotation are considered elements of symmetry in group theory — in a nutshell, the part of extended chemistry that discusses symmetry and its effects. From knowing some elements of symmetry in a molecule you can deduce others, but that’s not too relevant here.

The important point is the effect that the symmetry has on your molecule. Anything that can be represented as a vector — most notably the charge separation in a dipole — needs to transform onto itself, no matter which element of symmetry you apply.

In the case of $\ce{CF4}$, the molecule not only contains a number of planes of symmetry (not two or four, but six due to the picture bon showed). These planes also generate a centre of symmetry. And the only vector that can be transformed onto itself by a centre of symmetry is the null vector, which in turn means that a dipole moment can only be zero — hence a non-polar molecule.

In $\ce{CHF3}$, we suddenly encounter the reduction of symmetry, that is already evident in your flat drawings, but only truely discussable with the 3D-model. In a nutshell, you lose three of the six planes of symmetry and also the centre of symmetry they created. The three remaining planes of symmetry share a common axis — the one which also contains the $\ce{C-H}$-bond. And a vector, that points in the same or the opposite direction as this axis will be transformed onto itself. So you have sufficient reduction in symmetry to allow a dipole momentum, creating a polar molecule.

Simplified, this means that any and all molecules that contain more than one type of atom and do not contain a centre of symmetry are polar (to some extent). However, often — especially in the case of hydrocarbons with a difference in electronegativity of only $0.4$ — the polarity is so weak that the molecules can be considered non-polar.

As you state, the CF4 is symmetrical (tetrahedral, not planar), so there is no net polar moment.

Replacing one F with a Cl, however, introduces an asymmetry because the Cl is less electronegative, about 3 V vs. 4 V for F. One can imagine the electron cloud being pulled towards the 3 F atoms and away from the Cl; so the Cl is at the positive vertex of the tetrahedron, with three F atoms opposing it across the carbon.

Those are not the Lewis dot structures. The fluorine in both of these molecules should have complete octet structure like so:

This means that there are actually more electron pairs in place than you may have been considering.

My first line of thought is that both of these molecules are symmetrical (the vectors from each individual atom naturally canceled each other out) with no lone pairs of electrons.

In $\ce{CF4}$, you are correct. The molecules is perfectly symmetrical, so every electron pair on each fluorine cancels out the electron pairs of every other fluorine. For this reason, this molecule is non-polar.

Not the answer you're looking for? Browse other questions tagged molecules intermolecular-forces polarity dipole or ask your own question.

4
How to determine polarity in large molecules?
3
How can I tell if a molecule is polar or not?

2
Non polar molecular and attractive forces
8
At what frequency does a non-polar molecule acquire a dipole able to participate in London Dispersion forces?
4
What are dipole moments in a molecule supposed to act upon?
1
What is the difference between an ion-induced dipole attraction and just an ion-dipole attraction?
0
Why does phosphine have a dipole moment and a higher boiling point than carbon tetrafluoride?
1
Is selenium disulfide polar or non-polar?