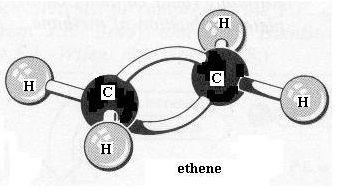 Replace one of the ethylene hydrogens with halide and imagine what happens as we approach the transition state. The bond angle in the two-membered ring wants to be small, but as we approach the transition state it needs to open up wider to 120°! This would create a lot of strain. It is this large strain energy that causes the $\mathrm{S_{N}}2$ reaction at $\ce{sp^2}$ hybdridized vinylic carbons to be a very high energy pathway and therefore less likely to occur.

Explanation Based on Pi Bond Model

11
Benzyne formation with Grignard reagents
0
Nucleophiles and bases (elimination and substitution)
4
Do alkyl halides with an alpha nitrogen atom undergo SN1 reaction?
1
Can't decide between E1 and E2 mechanisms for this reaction
0
The product of the reaction of chloroiodoalkane and cyanide ion in acetone