How to calculate the number of geometrical isomers in allenes?

If we have one double bond in a hydrocarbon compound we have an olefin or alkene. Ethylene is the simplest example of this class of compounds. The carbons in the double bond and the 4 atoms attached to them lie in the same plane. One pair of cis-trans isomers is possible in compounds with a single double bond.

If we add a nother double bond directly on to the end of the double bond in ethylene such that an sp hybridized carbon is created in the process, then we have formed an allene. The 4 substituents at the end of the double bonds in allene lie in planes that are oriented 90° to one another. Look at the allene (bottom line) in the following drawing. One set of substituents (R3, R4) are located in the plane of the screen; the other set of substituents (R1, R2) are located in a plane perpendicular to the screen. Allenes cannot generate cis-trans isomers, but they can generate enantiomers. 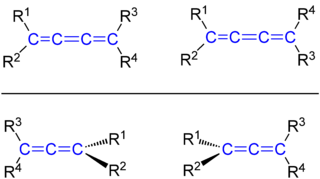 Now let's add one more double bond to allene such that we now have 2 sp hybridized carbons (top line in the above drawing). We see that, like in ethylene, the 4 atoms connected to the double bond lie in the same plane as the double bond and one pair of cis-trans isomers is possible.

The reason behind this is : For a even number of cumulative double bond compound(generally: Allene) the plane of π bond of that Allene are perpendicular to each other. This geometry of this π bond causes the groups attached to terminal C atom to lie in perpendicular planes. Such Allene with different substitutents on end C are chiral .Such Allene do not show cis trans isomerism, but show optical activity. (Due to the presence of stereo centres not chiral centres.)