I have been reading about resolution in mass spectrometry and there are a few things I do not understand. 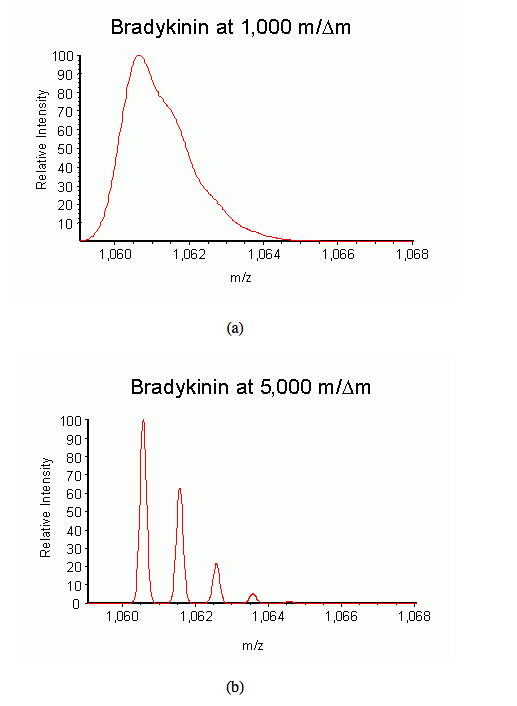 I'm not sure I completely understand what exactly your problem is, but:

Maybe it is easier to think of the reciprocal: $\frac{\Delta m}{m}$ which tells you how far two signal need to be apart so your spectrometer can resolve them.

The FWHM is basically part of the resolution. The $\Delta m$ is the m/z difference between two signals that are just resolved.

Have a look at the IUPAC's definitions of resolution in mass spec. There are several approaches to specify what "just resolved" means.

The FWHM can be used directly as the $\Delta m$ of the "peak width definition". If instrument A has $5\times$ the FWHM than instrument B, then resolution of A $\approx \frac{1}{5}$ resolution of B.

I'm more used to the "10 % valley" which roughly equals the full with at 5 % height: you specify how much signal is allowed at the minimum between the two peaks, e.g. 10 %.

It is important to realize that these two definitions differ by almost a factor 2!

Here are some results of "simulated" peaks at different resolutions and $\Delta m/z$ (all gaussian, which of course doesn't need to be the case in reality). I use the full width at 5% = 10 % valley definitions for the resolution.

The first row is resolution 5000 with the, second row is resolution 1000. You see that the two signals are much better resolved than in your example picture above. Which means that above another resolution definition was used, possibly $\Delta m$ = FWHM. In any case, a resolution of 1000 should be almost sufficient to resolve m/z 1060.2 from 1061.2.

The third row shows two signals of equal height with $\Delta m/z $ = 1 = FWHM. According to the resolution definitions above, this is a resolution of ca. 520. Note that while you can say that there are at least two peaks, you cannot take the two maxima as the m/z of the two underlying signals (grey).

The fourth row is almost the same, but I multiplied the second signal by 56% to account for the frequency of having bradykinin with one $^{13}$C. Looks quite similar to your picture. 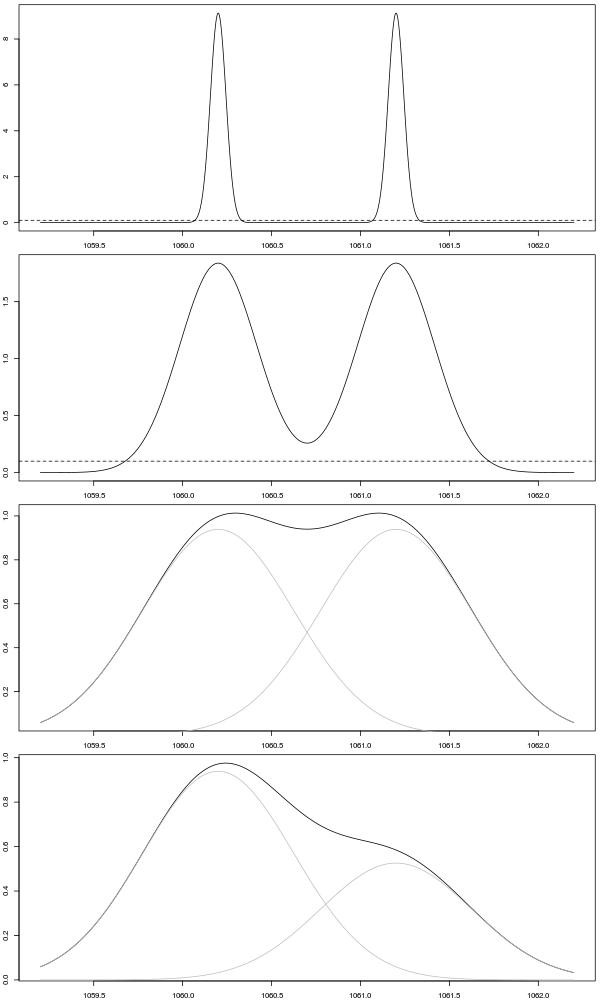