There are many methods available to obtain powdered metals and alloys. Wikipedia show some of them. Another form is grinding with posterior removal of wheel particles. All these methods produce metal powder with the help of specific machinery. I am asking for an alternative wet chemical method (water solution) or electrochemical method (water or ionic liquid electrolyte) to obtain metal powder (specifically iron, nickel and silicon, in pure or controlled alloy form).

Both metal powders can be preapred electrochemically. 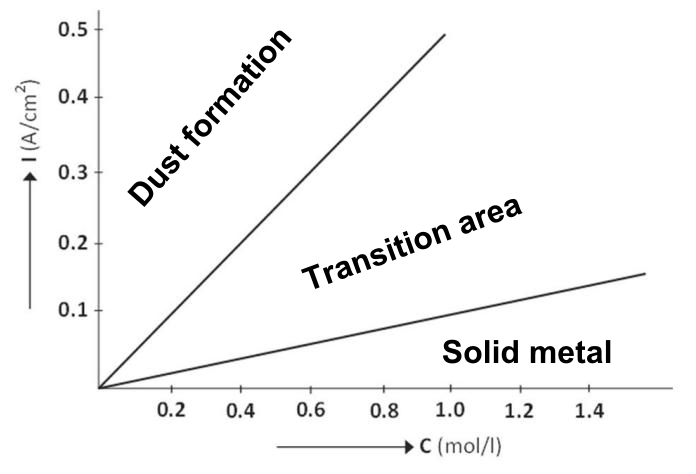 Nickel could be prepared electrochemically too and can be prepared by dissolving of Ni-Al alloy in hydroxide -Raney_nickel. The description of patent is here.

This is link to a study book PRÁŠKOVÁ METALURGIE, K. Skotnicová, M. Kursa , unfortunately only in czech.

Water will only be a efficient electrolyte to generate metals that are more weakly reducing than hydrogen gas. Otherwise, attempts to produce the metal will just result in mostly water hydrolysis. The chemwiki page at UC Davis has a good overview of this particular topic. The standard reduction potential for iron is too low (too reducing; too negative) to be made efficiently via an aqueous electrochemical process. Update: I softened the wording of this paragraph based on advice from Jaroslav Kotowski who noted that the original wording I used was wrong. Iron dust can apparently be made via electrolysis, but efficiency is very low.

Nickel and silicon are less powerful reducing agents than iron, but are still slightly more powerful than water under standard conditions. Some combination of pH and concentration adjustment could make it theoretically possible to generate these metals in a wet (aqueous) electrochemical process, but it would not be very efficient. I dug up a 1908 paper that reports that nickel films (not powders) can be electrodeposited from a (presumably aqueous) solution of nickel ammonium sulfate.

Non-aqueous electrolytes such as ionic liquids do not necessarily have this problem. You should read a review article on metal deposition from non-aqueous media such as this one.

Not the answer you're looking for? Browse other questions tagged metallurgy precipitation or ask your own question.