Are the hydrogen atoms of 2-methylindane homotopic, enantiotopic, diastereotopic or unrelated?

I'm very confused. According to the answer key, the circled hydrogens of 2-methylindane (2-methyl-2,3-dihydro-1⁠H-indene) are diastereotopic. I thought they were enantiotopic.

My thought process is the following. They aren't homotopic because replacing one of them with another atom would create a chiral center. Due to them creating a chiral center, I thought it was enantiotopic.

I thought that for it to be diastereoptopic, the carbon with the methyl group off of it would have to be chiral as well, but I don't think it is chiral. The molecule is symmetrical off both sides. Does diastereotopic rely on that carbon being chiral after the new atom replaced the hydrogen? If so, then I understand.

I was under the assumption that the state of that carbon must be chiral before the hydrogen is even replaced.

The process to determine whether two protons are enantiotopic or diastereotopic is to replace each with deuterium and look at the relationship of the resulting compounds. For the indicated hydrogens in 2-methylindane, replacement of each gives a pair of diastereomeric compounds (Figure, top). The compound also contains enantiotopic protons (Figure, center). The carbon where the replacement happens doesn't necessarily become a stereocenter in this process (Figure, bottom). 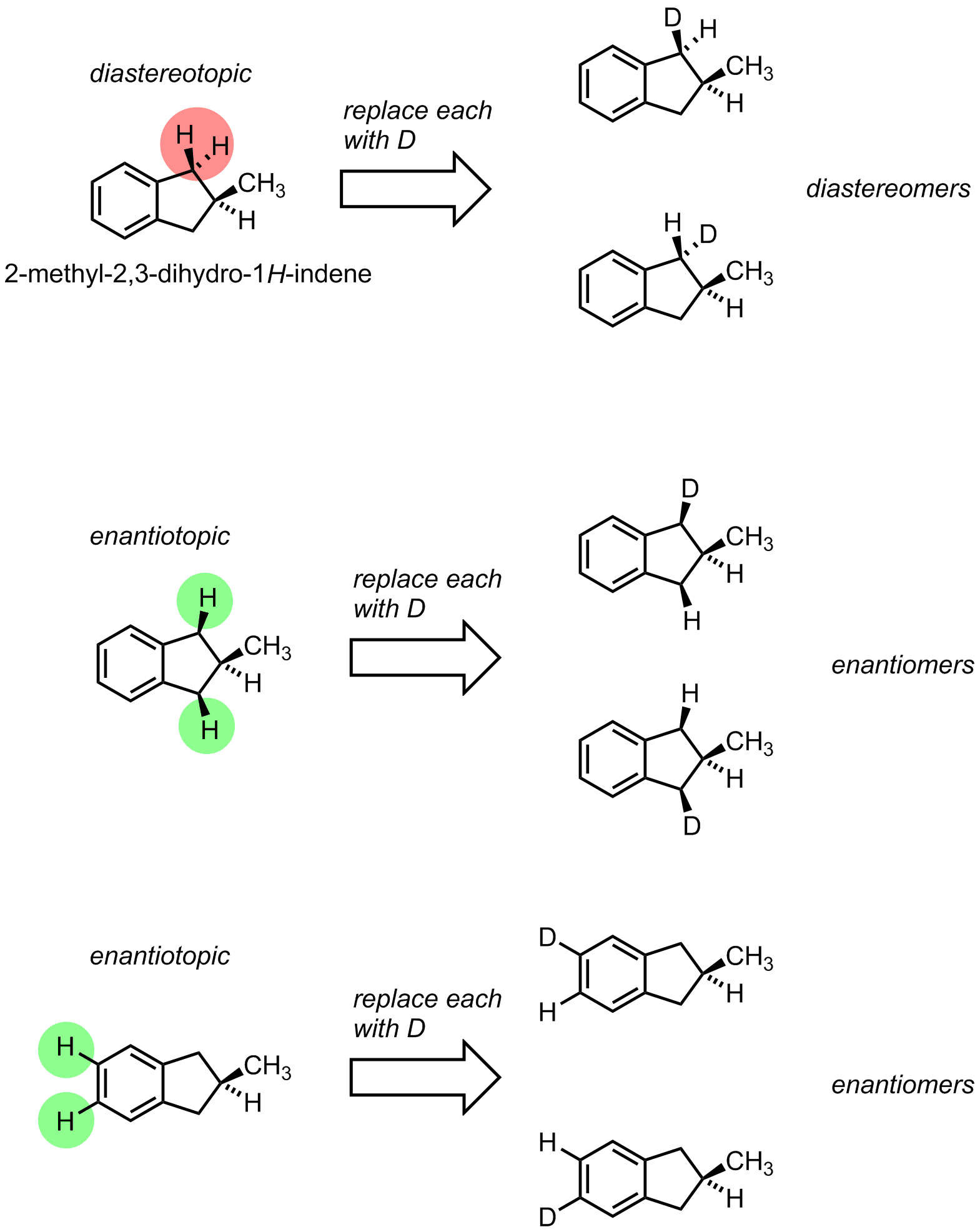 Additionally to the way jerepierre showed, which is typically the preferred way of identifying the topicity of groups, you can also attempt to distinguish the hydrogens by symmetry relationships. For that, you will first need to find out the point group of your molecule; 2-methylindane is $C_\mathrm{s}$-symmetric and thus the only symmetry operation available is $\sigma$. For comparison, let’s also consider indane (i.e. without the methyl group) which would represent the point group $C_\mathrm{2v}$.

Homotopic hydrogens are now those that can be transformed onto one another either by a rotation of the entire molecule or by a rotation of a bond. In 2-methylindane, only the $\ce{CH3}$ hydrogens can be transformed onto another in that way, namely by rotating the $\ce{C-C}$ bond by $120^\circ$. In indane, there are 5 pairs of homotopic hydrogens: the phenylic ones on the far left, the phenylic ones top and bottom and the two on the right-hand corner of the cyclopentane ring are the easy ones. The other four benzylic hydrogen form two homotopic pairs, whereby the above-plane upper hydogen is homotopic to the below-plane lower hydrogen and vice-versa. Note that these are the pairs which are transformed onto each other under the influence of the $C_2$ rotation. Homotopic protons have the same colour in the image below. 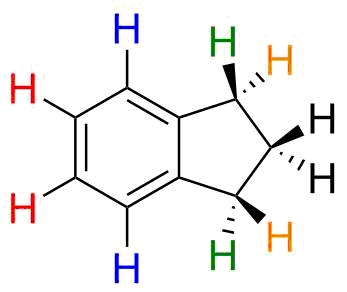 Enantiotopic are those protons that can be transformed onto each other by using planes of symmetry. In 2-methylindane, as jerepierre showed, there are three pairs of enantiotopic hydrogens. (The final, undisplayed one consists of the top-phenylic and bottom-phenylic hydrogens.) In indane, it’s not as simple due to the two $\sigma_\mathrm{v}$ planes. Most notably, the four benzylic hydrogens are practically all enantiotopic to each other except for the pairings that were homotopic above. Note how the far-right hydrogens do not have enantiotopic partners: they are either transformed onto themselves or onto the other one — but they are already homotopic as discussed above, which is ‘stricter’. Inversion symmetry would also generate enantiotopic hydrogens as would improper rotation.

Finally, all hydrogens that share the same chemical environment but cannot be transformed either by rotation or mirroring are diastereotopic. Indane has no diastereotopic hydrogen pair unless you count the unrelated ones. 2-methylindane has two pairs: The two benzylic ones bound to the same carbon as was shown.

Note that homotopic does not have to mean magnetically equivalent. In indane, the benzylic homotopic hydrogens are magnetically non-equivalent as they have different coupling constants towards third hydrogens.

Not the answer you're looking for? Browse other questions tagged organic-chemistry nmr-spectroscopy stereochemistry or ask your own question.

1
R,S Configuration
6
Benzylic Oxidation of Cyclic Molecules Using KMnO₄
14
IUPAC systematic name of Carminic Acid
4
What is physically responsible for different compounds with the same types of atoms?
2
How to determine whether two hydrogen are homotopic, diastereotopic, emantiotopic?
7
Product operator analysis for CHn groups in HSQC and HMQC
10
Mechanism for the addition of hydrogen iodide to 3,3‐dimethylbut‐1‐yne