In organic chemistry lecture we discussed the beginning of the Woodward Hoffmann Rules with a key step of the vitamin B12 synthesis.

I'm interested in the reverse reaction, the ring opening (6 electrons, and therefore disrotatory:

I'm thinking now about the torquoselectivity of the ring-opening (because in an exercise we had an example with 1-Ethyl-1-ethoxy(EDG)-cyclobut-2-ene).

Is there a rule how to see why the E (E: Electron withdrawing group) is in trans position when I start with the product?

I'm thinking if they are some stereoelectronic effects here which explain the obtained selectivity:

No, there is no general orbital symmetry rule for predicting which of the two possible disrotatory motions will be favored. However, by examining steric effects in the two possible transition states we can often make a good guess as to which product will predominate. There are always a few "special cases" like the one you referenced in your post, where with certain substituents under certain conditions certain things will happen. But to my knowledge there is no general rule for this situation. 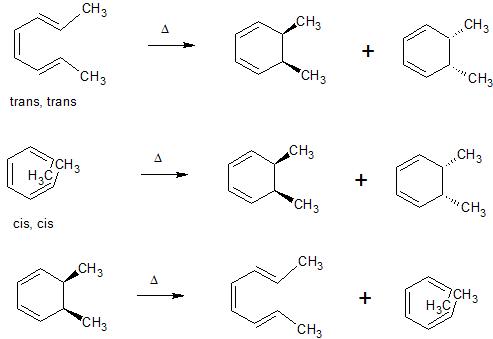 The top line shows the symmetry allowed disrotatory closure of trans, trans-1,6-dimethylhexatriene. There are two possible disrotatory motions - either the tops or the bottoms of the p-orbitals on carbons 1 and 6 can move towards each other in a disrotatory fashion. One motion produces the dimethylcyclohexadiene with the two methyl groups above the plane of the screen, the other motion produces the mirror image molecule with the methyl groups below the plane of the screen.

Similarly, cis, cis-1,6-dimethylhexatriene can undergo two disrotatory motions to produce the same two products (Note: the cis, cis isomer will react much slower and probably in lower yield; steric interactions between the methyl groups will disfavor the s-trans conformation about the two single bonds that is required for the ring closure to be able to occur).

The bottom line shows the reverse reaction, thermally converting a cyclohexadiene to a hexatriene. As shown, two possible isomers can be formed. The ratio of these two isomers will depend on steric interactions that develop during the two possible disrotatory motions. In this case, we will primarily obtain the trans, trans isomer; the cis, cis isomer has steric problems in its transition state from the two methyl groups bumping into each other (build a model).

In this last reaction, if we replaced the methyl groups with deuterium, we would obtain a roughly equal mixture of the two possible products, cis, cis- and trans, trans-1,6-dideuteriohexatriene. So again, there is no orbital symmetry "rule" for predicting whether a group would wind up cis or trans on the double bond. But if we examine the steric effects in the two possible disrotatory transition states, we can often make a good guess about which isomer should predominate.

Not the answer you're looking for? Browse other questions tagged organic-chemistry stereochemistry molecular-orbital-theory pericyclic or ask your own question.

18
Why does depurination happen at a higher pH (or under less harsh conditions) than depyrimidation?
4
Mechanism for hydroxyethylation on nucleobases (e.g. Thymine)
6
How to classify the hydride shift in the following diazacyclopenta[cd]pentalene system?
3
What does it mean “A oxidizes on B”
11
Why are fluoroalkyl chains hydrophobic/oleophobic?
9
Stereoelectronic effects in torquoselectivity of 4π electrocyclic opening
6
Dependence of rates of neighbouring group participation on length of alkyl chain