The Wikipedia article on metals describes them as elements whose polyatomic configurations* exhibit any one of a number of patterns. I could not discern any property that characterized all the patterns.

To the best of my knowledge, there are two main categories of elements: metals, non-metals. There's a third category, metalloids, whose members are those that satisfy some of the criteria for inclusion in both main categories.

It would seem very odd if there were nothing that characterized all, and only, metals. In fact it would seem that metals are better conceived of as an arbitrary grouping of what is actually a number of other categories, each of which would include all, and only, the elements that exhibit a single type of polyatomic configuration*.

*(I'm using the phrase 'polyatomic configuration' in order to express 'the way that atoms of a particular element stick together when you have a number of atoms of that element connected together'. Is there a standard term that expresses that idea?)

The Universe is full of continuous and smoothly-transitioning properties, yet which we often stubbornly try to assign a discrete yes/no answer in order to make the world easier to cope with. Metallicity is one of them. The Van Arkel-Ketelaar triangle is a diagram which attempts to show the transition between covalent, ionic and metallic types of bonding. Here is one populated by a variety of compounds: 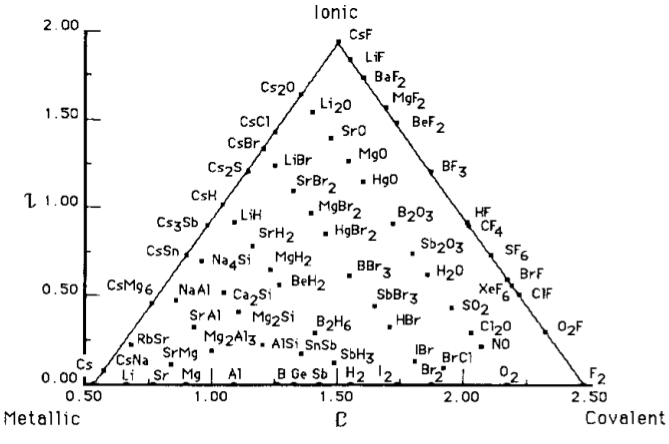 The closer a substance is to one of the vertices, the more that vertex is important in describing the nature of bonding in the material. As you can see, the entire triangle is populated quite uniformly. There are certainly many more materials which would fit in the gaps between the materials shown, and even simply varying the ambient conditions (pressure, temperature, etc), a same substance can be put in different regions of the triangle.

Given this behaviour, it should be clear that any attempt to rigorously define a line dividing substances between metals and non-metals will be fraught with difficulty and likely not useful in the first place. No matter where the line is drawn, there will be some compounds that will look strange for "barely being a metal", while others will be strange for "barely being a non-metal".

Possibly there is such a single characteristic.

I say "possibly" because in periodic table terms there is no universal agreement as to where metals stop and nonmetals (or metalloids) start.

That aside, Johnson (2007, p. 15) defines a metal as any element having an electrical conductivity at or below room temperature of at least 3 x 105 S m-1 along any direction in a single crystal of any known form of the element.

Johnson's 2007 definition appears to be in agreement with these observations but for astatine, which he shows as a semi-metal or metalloid. However the prediction of astatine as a metal was made in 2013, so there is no real contradiction here.

In summary, as earlier Users noted, electrical conductivity may fit the bill.

3
Are there natural or artificial enzymes that break down metals?
0
Is there a metal that melts and solidifies quickly?
22
Are there colorful metals besides gold and copper?
8
Organic solutions that corrode metals
1
Do only metals form ions?
13
Do there exist metals that are composed of molecules?
3
Are there metals that react with sulfuric acid but not hydrochloric (or vice versa)?
11
Why do only some metals make protective oxide layers?