How to explain the dipole moment anomaly of methyl fluoride and methyl chloride with respect to their hydracids?

At first I thought it was about distance, but upon seeing the second one, it led me to think about polarizability. So my question shortens to this: Which factor dominates while checking dipole moments and when?

A systematic examination of the $\ce{CH3F}$ and $\ce{CH3Cl}$ complexes with density functional techniques and high-level wave function theory indicates that the charge-separation within these complexes influences the relative corresponding dipole moments for these compounds. Though fluorine is indeed more electronegative than chlorine, $\ce{CH3Cl}$ had a larger dipole moment due to the longer C-Cl bond with respect to the C-F separation.

We know from general chemistry that fluorine is the most electronegative atom on the periodic table. Therefore, for simple molecules such as $\ce{HF}$ or $\ce{LiF}$, we would expect a rather large dipole moment than if we considered $\ce{HCl}$ or $\ce{LiCl}$. However, a dipole moment depends on separation as well. This can lead to some discrepancies in our general trends that we chemists love to use.

Consider chlorine. The atomic radius for chlorine is larger than it is for fluorine. A C-Cl bond is going to be longer than a C-F bond. In the case of methyl fluoride ($\ce{CH3F}$) and methyl chloride ($\ce{CH3Cl}$), we will have a difference in separation of the methyl group and the halogen (larger for the latter). Looking back at our electric dipole equation, an increase in $r$ translates into an increase in $\mu$. Perhaps it is this larger separation between the carbon and chlorine atoms that gives rise to these relatively similar dipole moments between $\ce{CH3F}$ and $\ce{CH3Cl}$.

Let us apply electronic structure theory to the problem. Dave has already provided a link to NIST which is a superb resource for these types of simple computations. However, to be thorough, we will perform our own computations. The experimental dipole moments for $\ce{CH3F}$ and $\ce{CH3Cl}$ (provided by DavePhD) are $\pu{-1.858 D} \text{ and } \pu{-1.897 D}$, respectively ([1] and [2]). Dipole moments from electronic structure theory for these complexes can also be found on the NIST website (source3 and source4)

Full optimizations and corresponding harmonic vibrational frequency computations are performed using the B3LYP density functional technique (sorry Martin) using the Gaussian 09 software package. The 6-31+G(d,p) basis set will be employed along with a series of Dunning's correlation consistent basis sets: heavy-aug-cc-pVXZ (where X = D, T, Q, 5). This basis set denotes that cc-pVXZ was employed for hydrogen atoms and the aug-cc-pVXZ basis set was employed for all heavy (i.e. non-hydrogen) atoms. A numerical integration grid consisting of 99 radial shels and 590 angular points per shell were employed for all DFT computations. In addition, full optimizations have been performed using the CCSD(T) level of theory using the CFOUR software package. The haDZ, haTZ, and haQZ basis sets have been employed for these computations. All geometries were constrained to $C_{3v}$ symmetry. Everything is converged to 'overkill'. Frozen-core approximation applied... 5D 7F spherical basis functions used, etc. etc.

The dipole moments (in Debye) as well as select geometrical parameters ($R$ in Angstroms) for the $\ce{CH3F}$ and $\ce{CH3Cl}$ complexes at various levels of theory are given in the table below. The deviation of the computed electric dipole moment from experiment is denoted as $\delta_{\mathrm{theory}}^{\mathrm{expt.}}$. Using this deviation as our main measurement of error, we can see that for the $\ce{CH3F}$ complex, the B3LYP/ha5Z level of theory deviates from experiment by only $\pu{0.01 D}$. A larger deviation from experiment is observed for the CH$_3$Cl complex with a magnitude of $\pu{0.1 D}$ at the B3LYP/ha5Z level of theory. These magnitudes are qualitatively similar at the CCSD(T) level. Therefore, with respect to the dipole moment, the B3LYP method with a triple-$\zeta$ quality basis set is necessary to describe this first-order property. 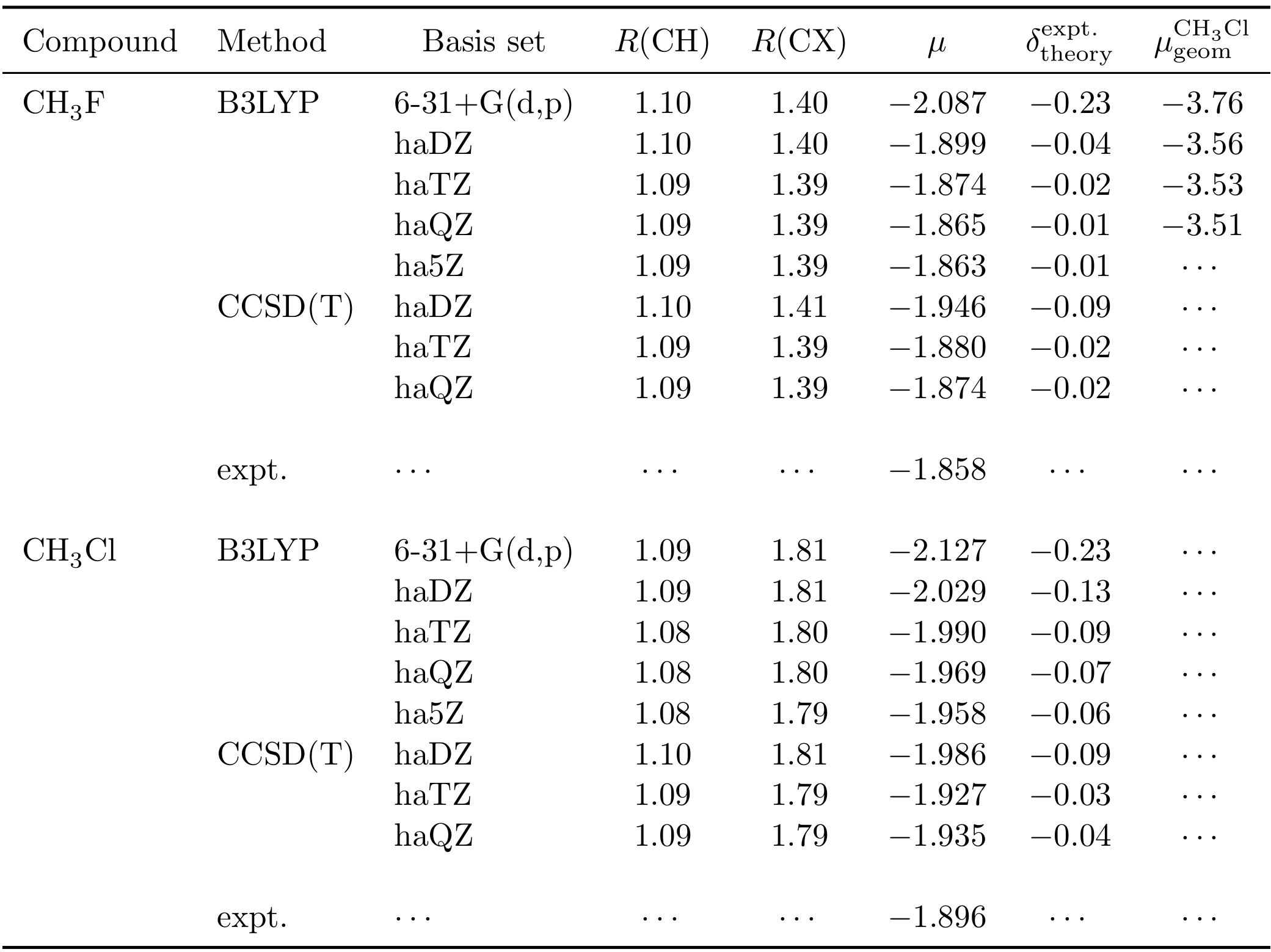 Clearly $\ce{CH3Cl}$ contains a larger separation between the Cl atom and the methyl group with respect to $\ce{CH3F}$ by about 0.4 Angstroms. If you wanted to back-calculate the charge for these complexes by assuming $R$(CX) (where X is the halogen) is equivalent to $r$ in the first equation, you will see that CH$_3$F has a larger charge (by about 0.25). However, we still see that CH$_3$Cl has a larger dipole moment.

The final column in the table above ($\mu_{\mathrm{geom}}^{\ce{CH3Cl}}$) denotes the dipole moment of $\ce{CH3F}$ when using the optimized geometry of $\ce{CH3Cl}$ at the corresponding level of theory. The dipole moment is significantly larger, by about $\pu{1.5 D}$, which is expected due to the larger C-F separation.

Though we as chemists like to resort to using the general trends provided by the periodic table, we must take into account other factors to explain deviations from these trends. Here we consider the separation of the halogen from the methyl group as an explanation for $\ce{CH3Cl}$ having a larger dipole moment than $\ce{CH3F}$, even though F is more electronegative. Our computational results qualitatively agree with experiment. In addition, B3LYP with a triple-$\zeta$ quality basis set is adequate in describing this first-order property according to CCSD(T) results. Finally, these results indicate that it is the charge-separation in these small molecules that greatly impacts the qualitative ordering of these dipole moments.

Not the answer you're looking for? Browse other questions tagged inorganic-chemistry dipole or ask your own question.

4
What is the most polar covalent bond?
0
Dipolar moment between HI and HF