What is the justification for Hückel's rule?

I know that experimentally, the rule has been verified but I am having trouble understanding why it works. I see no reason why equivalent cyclic structures can undergo resonance and be just as stable. Any clarification would be nice. 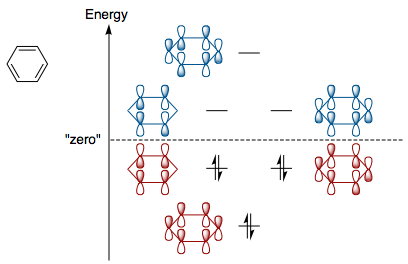 The above π MO diagram of benzene may be obtained through Hückel theory (see also: Pi molecular orbitals of polyenes). Here, the "zero" of energy (referred to as $\alpha$ in Hückel theory) refers to the energy of an isolated carbon 2p orbital that does not participate in bonding. Hence, any orbitals below this energy are bonding in nature, and orbitals above it are antibonding.

In the benzene MO diagram above, you'll notice that all the molecular orbitals that are being filled by the π electrons are more stable than leaving the carbons unbonded. On top of that, it can be shown that the stabilisation derived from delocalised π bonding in benzene is greater than the stabilisation derived from simply forming three localised C–C π bonds, in conjugation with one another, but not delocalised over the entire ring (e.g. in hexa-1,3,5-triene). This is the condition known as aromaticity.

Let's look at the MO diagram for a hypothetical perfectly square cyclobutadiene, for contrast. 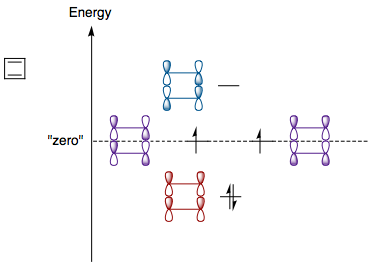 As with all molecular orbitals, the most stable orbital is filled first. However, problems start to emerge when going up to next two orbitals. First, unlike the next orbitals in sequence for benzene, these are formally nonbonding within simple Hückel theory.

It can be shown that this situation is less stable than the case for an alternative version of cyclobutadiene, where the double bonds are localised between two adjacent carbons. In practice, cyclobutadiene therefore undergoes a distortion away from a square geometry to a rectangular geometry, which has longer C–C bond lengths for the single bonds and shorter bond lengths for the now localised double bonds (see also: Cyclobutadiene - Jahn–Teller effect or not?). This is the condition known as antiaromaticity.

Not the answer you're looking for? Browse other questions tagged organic-chemistry theoretical-chemistry aromaticity or ask your own question.

17
Do lone pairs on substituents (e.g. in aniline) count towards Hückel's rule?
23
Cyclobutadiene - Jahn–Teller effect or not?
11
Pi molecular orbitals of polyenes
16
Is cyclopentadiene or cycloheptatriene more acidic?
8
Can a cyclic amine form an amide?
9
Why is cyclooctatetraene non planar but the cyclooctatetraenide anion planar?
6
Why are antiaromatic compounds unstable?
3
Why are anti aromatic compounds unstable?

15
Why does having equivalent resonance structures give more stability?
16
Is cyclopentadiene or cycloheptatriene more acidic?
16
How to determine the worst resonance structures out of a given set?
20
Similarities and Differences between Resonance and MCSCF treatments
47
Is buckminsterfullerene aromatic?
1
Stability of carbocations
1
Why is this carbocation more stable?
14
Can Hückel's rule be applied to inorganic compounds?
1
Estimating BDE Values