What is the product of a copper and vinegar reaction?

I put a copper wire through a hole in the cap of a water bottle, filled the water bottle ~ half way full with vinegar, and left it over night. The part of the wire inside the bottle that wasn't in vinegar turn black. Really black. Why is this?!

UPDATE: I wiped the black stuff off on paper, and it now looks green on the white paper. Seems like it oxidized over night. Why so fast?

I think this question is related to the Le Chatelier’s principle: \begin{align} \ce{2Cu + O2 &\;<=> 2CuO}\\ \ce{CuO + 2HOAc &-> Cu(OAc)2 + H2O} \end{align} You mentioned that half the copper wire was under the acetic acid, so it was not in contact with oxygen. Thus, the lower part did not get oxidized. The upper part of the wire was in contact with oxygen and reacted to form $\ce{Cu(II)}$ oxide. Because there was acetic acid vapor in the atmosphere of the closed bottle, the acid reacted further with the $\ce{Cu(II)}$ oxide, creating $\ce{Cu(II)}$ acetate and water. The removal of $\ce{CuO}$ therefore pressed the oxidation reaction to proceed forward, making more $\ce{CuO}$ and then $\ce{Cu(II)}$ acetate. As a result, the upper part of the copper wire became dark blue/green overnight due to the color of $\ce{Cu(OAc)2}$. 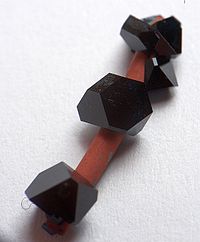 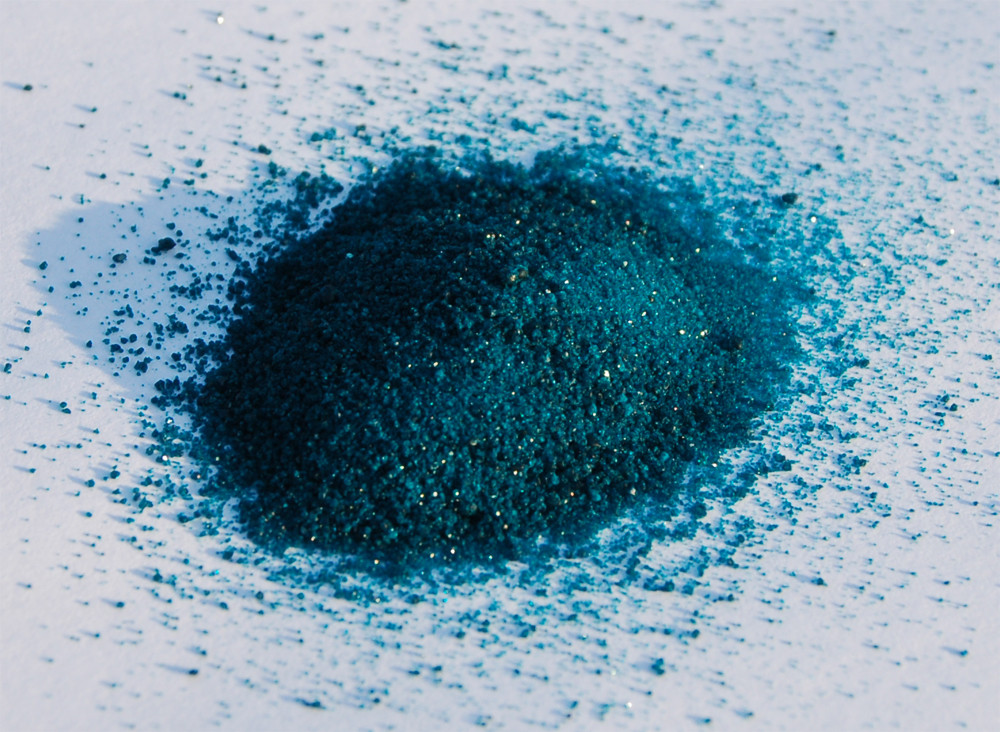 The rate of formation is a property inherent to the reactants and the products, but it also depends on temperature.

Actually, there is little to no reaction of vinegar on copper metal (hence, the copper wire in solution is clear). Existing $\ce{Cu2O}$ coating will be slowly attacked, forming a cuprous acetate which in air/oxygen creates soluble cupric acetate. The latter serves as a weak electrolyte for a further electrochemical attack of the copper metal with $\ce{O2}$ subject to an inception period delay.

Passing air into the solution, or much more effective, adding $\ce{H2O2}$ promotes the electrochemical reaction as does adding a small amount of a good electrolyte (like $\ce{NaCl}$, which also complexes with insoluble cuprous forming a soluble copper compound). There is a commercial application of the electrochemistry cited in Wikipedia$\ce{^{[1]}}$, which more generally occurs with many transition metals other than copper:

Now, why the black $\ce{CuO}$ (and basic copper acetate) coating on the part of the copper wire exposed to air, acid fumes, water vapor and dust particles? Because per the reaction above, I surmise that $\ce{CuO}$ and basic copper acetate would be the expected products in low water conditions in the presence of oxygen/air and H+. The dust, I would further speculate, maybe a source of an electrolyte or other metals like iron. This could result in a so-called redox couple favoring also recycling the copper ions, per the reaction:

Now, anyone who has heated copper metal in a flame is aware of the fact that even at high temperatures, $\ce{Cu/Cu2O}$ does NOT easily react with oxygen in air to create black $\ce{CuO}$ (and using a methane flame is problematic as $\ce{CH4}$ can reduce any created $\ce{CuO}$ back to $\ce{Cu}$, so a decidedly poor path to cupric oxide).

Many are more likely acquainted with the key electrochemical reaction cited above in the case of metal iron, a process described as the production of RUST. Interestingly, Fe is not readily attacked by cold mineral acids, but is with oxidizing acids as $\ce{HNO3}$ and even feeble $\ce{HOCl}$ (hypochlorous acid). Add oxygen and even weak $\ce{H2CO3}$ (carbonic acid) in the presence of $\ce{NaCl}$ will electrochemically attack iron metal (and, more slowly, copper metal also).

For those who trust less in theory and desire experimental results, see my demonstrated electrochemical cell preparation path to $\ce{CuO}$ (with pictures) in one of my threads here$\ce{^{[5]}}$ .

Just read Wikipedia article on Verdigris again, and it is clear per the preparation path described by Nuygen above, that the product is classic (except for the use of a copper wire in place of a copper plate, with a varying height separation from the 5% vinegar), and accurately detailed by Wikipedia at https://en.wikipedia.org/wiki/Verdigris . To quote, in parts:

"Verdigris is the common name for a green pigment obtained through the application of acetic acid to copper plates[2] or the natural patina formed when copper, brass or bronze is weathered and exposed to air or seawater over time. It is usually a basic copper carbonate (Cu2CO3(OH)2), but near the sea....If acetic acid is present at the time of weathering, it may consist of copper(II) acetate. "

"Verdigris is a variable chemical mixture of compounds, complexes and water.... All the components are in an ever-changing and complex electrochemical reaction equilibrium that is dependent on the ambient environment."

All of which confirms my answer above and challenges the cited 'correct' answer that the product is simply copper(ll) acetate and not too likely, in my opinion, as was claimed on the three-sentence 'correct' answer, to be just dry (anhydrous) cupric acetate.

Actually, I agree with Nuygen on several of claims likely based directly on his observations (namely, a complex mix with an apparent presence of CuO, a shift from light (basic copper acetate per Wiki) to more colored salt, possibly cupric acetate (as also mentioned by Wikipedia).

Here is a video with vertically hung copper sheets at https://www.youtube.com/watch?v=jq5MB1H_hVc . Note the product color and compare to Nuygen's description.

As a side note, vinegar is not pure dilute acetic acid. Depending on the source materials and manner of processing, impurities may be present.

Not the answer you're looking for? Browse other questions tagged everyday-chemistry redox metal or ask your own question.

2
Figuring out the volume of air trapped inside a bottle of water
1
Can the product be called “vinegar”?
18
Iron chemistry: acetates for ebonizing wood
4
Does carbonated water change over the course of several days, or was my container leaky?
14
Can drinking a lot of water be fatal?
0
Ethanol discolored yellow when stored with a rubber stopper. Forming fine white precipitate when added to water
4
Why does my sodium acetate look like metalic magma?
8
What is the black slag formed when sterling silver is melted with borax?
0
What (stored-as-solids) acids/liquids can clean corroded copper?