Why is the benzyne triple bond distorted?

In benzyne, however, the p orbitals are distorted to accommodate the triple bond within the ring system, reducing their effective overlap.

That makes no sense to me — why can't a normal, parallel $\ce{p\pi-p\pi}$ overlap be "accommodated" within the system.

So, what is the reason for the distorted $\pi$ bond in benzyne?

I'm fine with answers involving a bit of QM/MO theory.

First, Wikipedia doesn't really say what is the extent of this change. Here are superimposed a benzene and a benzyne molecule (own HF calculation, don't ask for the details): 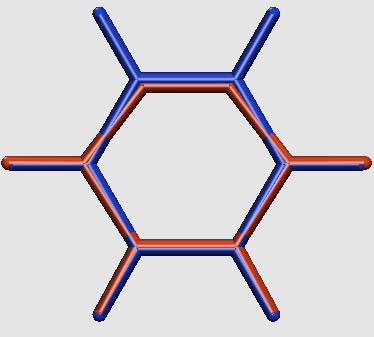 The carbon atoms involved in the triple bond are displaced by less than $\pu{0.2 Å}$. In benzene, we have with this level of calculation:

while in benzyne, we have:

So, merely because the triple bond is stronger, the distance will be shorted and the benzyne structure is distorted.

Regarding orbitals, well, the p orbitals of the carbon atoms involved in the triple bond are “naturally” directed towards where the hydrogens would be. Slightly distortion of the system is possible, and indeed evidence above on the structure, but they will not be parallel, as that would disrupt the structure too much and diminish the $\sigma$ bond. So it's a competition between: making the new p orbitals “more parallel” increases overlap, but it weakens the $\sigma$ bonding pattern, which is much stronger. As such, while some distortion happens, you stay mostly close to the benzene-type orbitals.

12
Why is benzyne an intermediate?
5
Why is only one lone pair in imidazole delocalised?
2
Do chemists use molecular orbital theory to explain physical characteristics of a compound (i.e. melting point, boiling point, etc)
12
Are carbocations necessarily sp2 hybridized and trigonal planar?
12
Why does benzyne dimerise and not trimerise?
5
Chain with double bond or triple bond