I completely don't understand how this method works. My book says that this method works by the principle of self-absorption which occurs by the emitted radiation of hollow cathode lamp when it works on high intensity of electricity, due to which we have more atoms who lead to an extension of emission lines. This is how self-absorption occurs. Does anyone have any proper explanation for this?

What does this self-absorption actually mean?

How does that lead to a correction?

The Smith-Hieftje background correction is basically another means of "chopping" the signal. The amplifier locks onto the chopper frequency to cancel out the background noise. "Locking on" essentially means that the amplifier will measure the difference between the two signals.

So one way to chop the "light" from the emission tube would be to insert a "fan blade" to mechanically chop the light on and off.

The Smith-Hieftje background correction is a bit more complicated. Basically what happens is that this emission tube has two parts. A heater to vaporize the source of the atoms in the tube and an electron beam to stimulate an excited state. In this type of emission tube the heater is pulsed high and low. When the heater is low it produces enough metals atoms so that the atomic line emission is created. But when the heater is on high heat then it vaporizes so many atoms that the vapor cloud of metal atoms self-quenches the emitted atomic line emission. The high density cloud of atoms also means that the atoms bump into one another. So instead of the atoms in the cloud all having about the same kinetic energy they have a range of kinetic energies which results in line broadening.

High intensity of electricity added to the source ( $\ce{HCL}$ ), gives us more atoms, and when we have more atoms then the chances for self-absorption are higher. One atom will get excited and then turning back will emit radiation, the other atom from the same radiation will absorb that emission. In the beginning, the instrument measures the intensities of radiation at normal intensity of electricity. After that, it makes the measurement on higher electricity. The difference between them, should give us the background absorption.

I'll stast by explaining what a HCL is and how it works, and then move on to background correction.

A hollow cathode lamp (HCL) is a hollow glass tube filled with low pressure of some noble gas (Neon or Argon), inside the glass tube there is a cathode and an anode. The cathode is made with the metal you are interested in measuring.

The lamp works as follows: A potential difference is applied between the cathode and the anode, such that the cathode has a lower potential than the anode. The potential must be high enough to ionize part of the gas that fills the tube, the positively charged cations accelerate towards the cathode, while the electrons fly towards the anode. When the cations hit the cathode some of the metal atoms in its surface detach, afterwards, this detached atoms become excited due to collisions with nearby atoms and release this excitation energy as photons (light). The photons emitted are, in principle of different single specific wavelenghts depending on the energy difference between the excited and base states, however, there are some phenomena (mostly the fact that there are other nearby atoms that slightly shift the energy levels, and the Doppler effect) that contribute to the single wavelenghts being instead small intervals of wavelenght. This is called "Line Broadening". This line broadening is more apparent if there is a higher concentration of atoms in the vicinity of the emitting atom, or if temperature is higher.

If a higher potential difference is applied between the cathode and the anode, then a higher amount of atoms is emitted from the cathode, because cations impact the cathode with a higher kinetic energy. This high concentration of atoms means two things: First, its very likely that the emitted radiation will be reabsorbed by some nearby atoms, this has the effect of lowering the intensity of the "lines" emitted by the HCL. Second, a high concentration of atoms and higher temperature (atoms collide with higher kinetic energy, wich implies higher temperature) will mean that the lines will broaden considerably (a link to an image is provided at the end of the answer)

The Smith-Hieftje background correction works as follows: First the absorption by the sample of the lines emitted by the HCL is measured normally by the detector. This includes the absorption by the analyte and the background absortion due to matrix effects, etc. Then a pulse of high voltage is applied to the HCL, so that the emission lines are broadened and the center of the lines is self-absorbed by the atoms in the lamp as described previously.

Because the analyte can only absorb the wavelenght that was already self absorbed by the HCL, the analyte won't absorb anything. The matrix and other impurities, however, will absorb the wavelenghts of the broadened line (background absorption typically has the form of wide absortion bands, not single lines, so taking out a single frequency doesn't affect it much, think continuum background correction with deuterium lamps).

Now one has both, the value of the absortion of the analyte + background and of the background. The only thing left to do is substract them, which is done automatically. This process is repeated periodically, during the duration of the measurement (after the pulse of voltage is made, a small interval of time has to pass so that the detached metal atoms in the HCL can deposit themselves again in the surface of the HCL and don't interfere with subsequent measurements).

www.agilent.com/cs/library/applications/a-aa14.pdf (hollow cathode lamps) https://books.google.com.ar/books?id=eTz6AwAAQBAJ&pg=PA478&lpg=PA478&dq=Smith-Hieftje+background+correction&source=bl&ots=Rst6iNgPM6&sig=2JOZBeSiYOutOOzSuZg2RNqSNls&hl=en&sa=X&ved=0ahUKEwizjPSi2Z3LAhXLh5AKHYL4Cn4Q6AEIUDAI#v=onepage&q=Smith-Hieftje%20background%20correction&f=false (a neat book, not specifically on AAS but has a nice explanation of background correction, check page 478 for an image of a self-absorbed, broadened emission line).

All good answers, and I am way late, so I will just post two figures (from optical calculus simulations) that help illustrate how the Stan Smith and Gary Hieftje background correction works. First, the HCL and absorber spectral profiles for Ca at the usual detection wavelength: 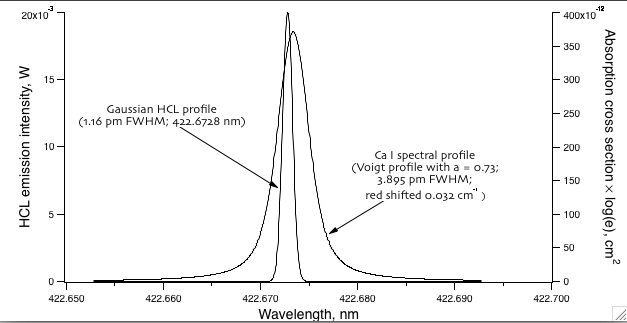 First, note the shift due to the source and absorbers being at different temperatures. Second, the HCL profile is narrower. Third, it is OK that the HCL in not monochromatic or perfectly aligned with the absorber profile.

The next figure shows the HCL profile and the absorber profiles at low HCL current and at high HCL current: 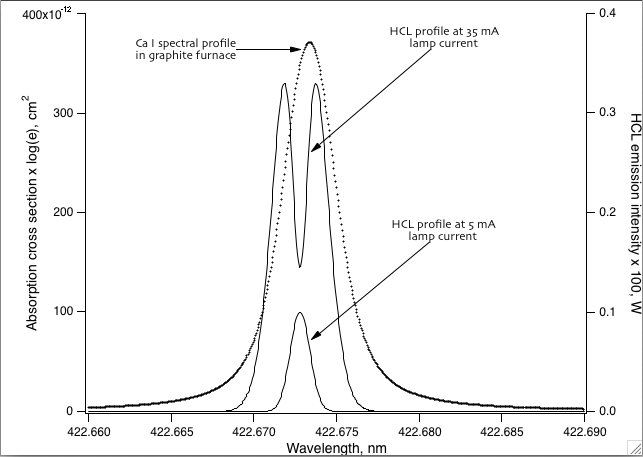 The self-reversal and broadening of the HCL band is clear. So now the background correction concept should be clear, as nicely discussed in the previous answers.

Not the answer you're looking for? Browse other questions tagged experimental-chemistry analytical-chemistry or ask your own question.