Why does pyrite form cubic crystals? 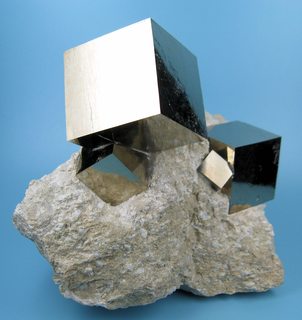 I know that the crystal structure is primitive cubic, but I don’t see how cubic structure on the molecular level translates to cubic structure on much larger scales. If you are given some number of cubes, there are many different ways to assemble the cubes face to face, and only one of these ways is to create a large cube. So why is it that the pyrite in this rock forms nearly perfect cubes?

Pyrite can actually come in a range of crystalline morphologies, as seen below:

Image source: Modelling nanoscale $\ce{FeS2}$ formation in sulfur rich conditions (J. Mater. Chem. 2009, 19 (21), 3389), who state that the shape is dependent on the concentration of sulphur during its formation.

Modelling of cubic pyrite crystals, as in the picture in your question, are explained in the article Modeling the Shape of Ions in Pyrite-Type Crystals (Crystals 2014, 4 (3), 390–403.), modelling the following structure: 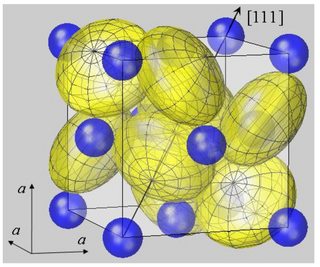 From the caption, the blue spheres represent $\ce{Fe}$ and the ellipsoids represent $\ce{S}$. The shapes of the constituent chemicals used in this diagram is based on their modelling, specifically one of the conclusions the author makes is that:

The $p$ valence ion in this case being sulphide. With this model in mind, the explanation provided in the caption for this diagram states:

The mesh inscribed into the sulfur ions now reveals the ellipsoidal compression along <111> directions. In this model, the number of contact points of $\ce{S}$ and $\ce{Fe}$ ions become four and six, respectively, and the ellipsoidal deformation is concluded to enable a stable packing.

The molecular shape does not necessarily mean that the pyrite crystal has a cubic shape, however if the conditions are right (pressure and temperature), and the composition is 'correct' - if the formation is in a iron rich environment (as per the first reference), then this molecular shape could express as a cubic crystal.

While pyrite crystallises in spacegroup $\mathrm{Pa\bar{3}}$, i.e., a cubic spacegroup, there is no guarantee that the unit cell shape is resembled in the macroscopic crystal shape. The faces of the crystal do however always represent a plane that can be described by some Miller indices of the crystal lattice. And indeed, there are multiple alternative crystal habits for pyrite (eg dodecahedral, see Wikipedia article and santiago's answer), while retaining the same internal structure. Which habit forms in practice, is mainly determined by the crystallisation conditions. These have to be determined empirically, as there is no way to predict them.

The crystal grows with the same speed in three perpendicular directions, by slowly starting new planes in each direction, which then fill much faster.

Quickly filling new planes minimises surface energy, so that seems logical. That a cubic space group has no preferred growth direction is not as compellent, but fits the bill in case of pyrite.

(Be careful: This rationalises the fact, but predictions, like the other answers say, are difficult.)

All completely pure primitive cubic crystalline compounds will form macroscopic, perfect cubes. Deviations in macroscopic form are the result of impurities somewhere in the molecular lattice, otherwise a low cohesive energy such that the chunks of material don't stay together well (e.g. by electrostatics). Perfectly pure $\ce{NaCl}$ forms cubes likewise, but smaller ones, because the cohesive energy is lower (if I'm not mistaken). Thus the energetic affinity of a material for itself (over available impurities) increases probability of perfect macroscopic formation that models the crystal unit-cell. Most compounds attract foreign species though, so nicely perfect cubes of any cubic-structure chemical are hard to find -- even of pyrite, as mentioned in the other answer. Lots of materials form surface oxides before expanding a macroscopic version of the unit cell; others bond with similar ionic "pieces" -- e.g. contamination of $\ce{K+}$ in $\ce{NaCl}$ to form chunks of rock salt, $\ce{KCl}$.

$\ce{NaCl}$ crystal is used as an optic barrier for samples in infrared spectrometers because when pure it can be shaped linearly in any dimension to form any desired (semi-)planar shape with atomic precision. Effectively you can remove one atomic layer at a time because it's a pure two-component cubic macro-system.

I remember when I traveled to the Dead Sea in Israel -- there were really nice, big (like 1-inch), perfectly formed salt cubes on the shores. I have some pyrite at home too. It's cubic but some chunks form out in different proportions and directions due to impurities/chemical environment.

To enhance the point -- even more complex but still cubic unit-cell materials make macro-cubes, if pure of foreign material, e.g. MOF-5 and others: 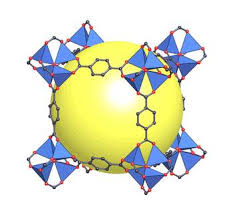 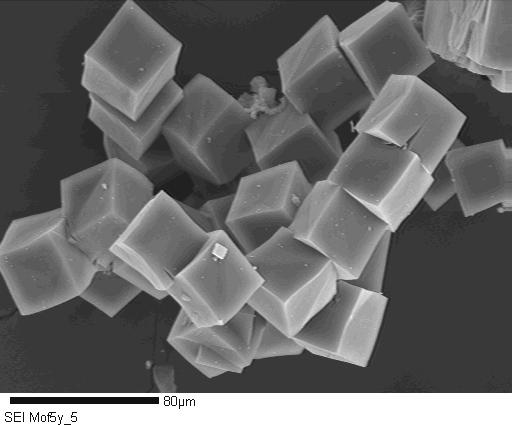 4
How does the atomic structure of crystals determines its shapes?

6
What salts are/are not birefringent?
10
Why does Naphthalene turn into needle-shaped crystals by sublimation?
5
Why is Cubic closed packing called "cubic"?
0
Aren't unit cell and the relevant crystal similar?
4
Is (high) pressure required to form (quartz) crystals?
1
Cubic crystals anisotropy
5
Why do noble metals like silver not form natural cubic crystals?
3
Struvite crystals: how do they form?