In my inorganic class, we carried out the synthesis of chlorotribenzyltin, $\ce{SnCl(CH2C6H5)3}$. 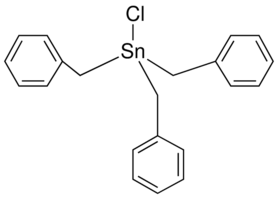 The synthesis begins with a reflux I'll describe below:

*The white solids that appeared shortly after refluxing commenced should have largely disappeared, although small amounts of white or gray solids on the sides of the flask are usually still present. The reaction mixture at this point should consist of two liquid phases, plus a small amount of unreacted tin.

So the question the textbook asks is

Propose a chemical formula for the white solid that forms during the initial stages of the reaction of Sn with benzyl chloride.

I have a number of ideas as to what this could be:

This last one seems most likely based on supporting evidence from the text:

$\ce{SnCl4}$ reactions with Grignard reagents to give organotin compounds: $$\ce{SnCl4 +4RMgX->SnR4 +4MgXCl}$$ ... (it goes on to say)...the product, chlorotribenzyltin $\ce{SnCl(CH2C6H5)3}$, is a colorless solid that is stable in air for several days. In some respects, the reaction is analogous to the preparation of Grignard reagents, $\ce{RMgX}$ by treatment of magnesium metal with organic halides.

Is my reasoning for choice 3 solid? Is there something I'm not thinking of?

Not the answer you're looking for? Browse other questions tagged inorganic-chemistry synthesis organometallic-compounds or ask your own question.

8
The Crisscross method for finding the chemical formula
3
What is the molecular formula of the nitrate of a metal Q that forms a carbonate of the form QCO3?
4
What is the mechanism for the reaction of acetyl chloride and aniline?
1
Determining the mass of sodium sulfate that forms when reacting sulfuric acid with sodium hydroxide
3
How to remove fluorine from 2-[2-(3-bromophenyl)ethenyl]-5-fluoro-1,3-benzoxazole?
4
Mechanism for the reaction between trisilylamine and hydrogen chloride