Molecular orbital diagram of a complex including an oxido ligand

With highly oxidized metal centers, we expect that the hydroxido ligand's proton becomes acidic and will be lost to the surrounding media, creating an oxido ligand.

The oxo ligand is a $\pi$ basic ligand and we expect both $\sigma $ and $\pi$ donation into the metal center.

My only explanation is that the complex's symmetry is reduced with the presence of an oxo ligand maybe from $O_\mathrm{h}$ to $C_4$ or similar. This would then change the symmetry of the $\mathrm{t_{2g}}$ orbitals on the metal center, but I really need some help explaining this!

Although chemists and chemistry students alike often indiscriminatorily use the $\mathrm{t_{2g}}$ and $\mathrm{e_g}$ descriptors for the d-orbitals of a d-block metal in coordination complexes, those designations are only truly correct in an octahedral environment. The vast majority of coordination complexes, however, are not octahedral but distorted octahedra, octrahedroids with non-symmetric ligands and others. This is also the case for oxido-ligand coordinated complexes that you are asking about.

To restrict the discussion to a single species (although it can easily be expanded to others) I will craft my answer explaining the situation in the vanadyl cation $\ce{VO^2+}$. I will discuss the pentaaquaoxidovanadium(IV) cation $\ce{[VO(H2O)5]^2+}$ as Ballhausen and Gray analysed.[1] I will label the direction of the oxido ligand $+z$ (in line with their scheme).

The first important thing to note is that the complex indeed does not display octahedral $O_\mathrm{h}$ symmetry but $C_\mathrm{4v}$. That is great for us because it facilitates practically every step in the construction of molecular orbitals. A character table for the $C_\mathrm{4v}$ point group can be found in orthocresolŌĆÖs collection (Note: MathJax-heavy link. Give it time to load). In the tables below I have given the different metal and ligand orbitals and their irreducible representations.

If required, I can supply images of the π and σ symmetric orbitals of the equatorial ligands once I am back at a PC that has ChemDraw (not before the 8th of January). It is not always fully obvious which orbitals interact with which ones; however, it is very obvious that the π2 ligand group orbital is nonbonding with respect to the $\ce{L\bond{->}M}$ bond.

In a second round, we need to consider the strength of interaction. The oxido ligand is much closer to the vanadium centre ($d(\ce{V=O}) \approx170~\mathrm{pm}; d(\ce{V\bond{<-}OH2}) \approx 230~\mathrm{pm}$) meaning that any interactions with that will be considerably stronger. (There are hints pointing towards an even more elongated axial aqua ligand, but that would be secondary.)

The orbital scheme as published 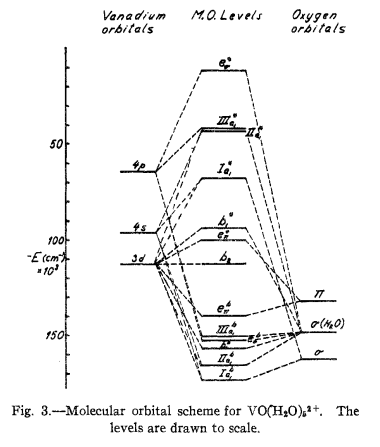 Not the answer you're looking for? Browse other questions tagged molecular-orbital-theory coordination-compounds transition-metals or ask your own question.

5
MO-Scheme of SCN- and its bonding properties when used as a ligand
4
Why do better ŽĆ-acceptor ligands cause smaller ╬ö(T) d-orbital splitting?
3
How do I determine the number and order of ligand orbitals?
11
IS DMSO-o a Žā-donor, a ŽĆ-donor, or both?
3
Deriving the irreps of the d-orbitals under C3 and S6 operations in octahedral symmetry