What are the resonance structures of 3-aminocyclohex-2-en-1-ylium?

How would you draw the resonance structure for the compound below:

This is one of the resonance forms I think... but I'm sure there is another one too. 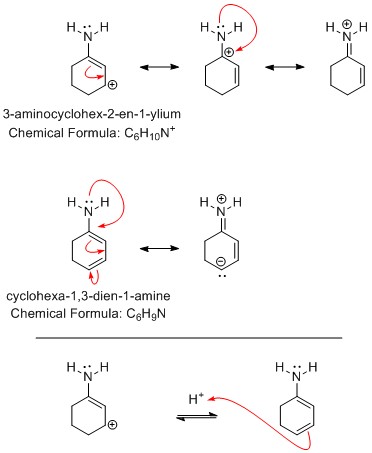 However, the two structures can be interconverted via an acid-base reaction.

And for the stability of 3-aminocyclohex-2-en-1-ylium, the last structure would be most stable (with the positive charge on the EN nitrogen)?

There is no such thing as a most stable resonance structure. Resonance is only a concept that breaks down a highly complicated electronic structure into imaginable contributions of Lewis structures. All of these contributions are present all of the time. However, there are usually a few, that would describe the overall character best. Sometimes there is even only one predominant one.
The concept of resonance is necessary to describe delocalisation effects, hence the Lewis-like representation below is probably much closer to the actual structure than any of the resonance forms depicted above.