Origin of alkenes from Wurtz Reaction

Also, since the reaction involves free radical species, a side reaction occurs to produce an alkene. This side-reaction becomes more significant when the alkyl halides are bulky at the halogen-attached carbon.

How would a radical reaction end up producing an alkene in the context of the Wurtz reaction?

What I do see happening is an E2 elimination creating an alkene.

Disproportionation has been so universally accepted as the criterion of a free radical that there has been no attempt to show a derivation from other molecular species. Nevertheless, a mechanism for this phenomenon by way of an organometallic intermediate appears exceptionally reasonable. If an alkylsodium meets an alkyl halide in such manner that the two alkyl chains are adjacent to each other while sodium halide is being formed, the two alkyl residues will have unlike charges and a proton will be drawn to the alkyl radical having the two unsaturated electrons. The reaction is merely the conventional prototropic change taking place between adjacent portions of two molecules whose inorganic components are effecting, or have just completed, a union. 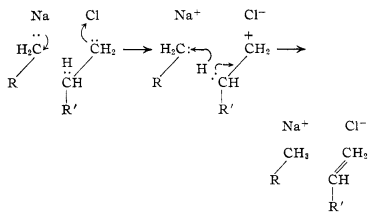 If this view be accepted, the olefin produced must come from the alkyl halide rather than at random from both participant alkyl radicals. Though conclusions are to some extent obscured by a metal-halogen interchange (see later), all available facts unquestionably point to the correctness of this deduction.

However, there might be another reason, which I cannot back up with literature. This is probably due to the persistence of the radical species; higher concentration of radicals increases the possibility that they react with each other. In other words, one radical abstracts a hydrogen from another radical, hence creating an alkane and an alkene, in a purely radical reaction. $$\ce{2 R-CH2-CH2. -> R-CH2-CH3 + R-CH=CH2}.$$

But then again radical mechanisms are never simple and it is quite possible that this does not happen at all, yet it would appear to be at least an explanation for the Wikipedia statement.

Yes it's possible this way:

Not the answer you're looking for? Browse other questions tagged organic-chemistry synthesis halides hydrocarbons elimination or ask your own question.

5
Why does rearrangement not take place in Wurtz reaction?
5
What product is formed in the Wurtz reaction of 1-bromo-3-chlorocyclobutane?
8
Mechanism of DPD (N,N-diethyl-p-phenylenediamine) reaction with free chlorine