What is there in an atom between the nucleus and electrons?

As you can see the atom consists not only of the nucleus and electron but also of "empty space is the space empty or is their something else? 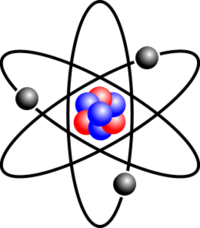 It is not necessarily empty space.

For example the flux of neutrinos on Earth is about $\pu{3E12 cm-2 s-1}$. At a given moment, a neutrino may or may not be within the atom or even within the nucleus of the atom. Similarly, other particles may be present within an atom at a given time.

Also, an electron may be inside the nucleus in accordance with the Fermi Contact Interaction. So if you have a hydrogen atom, having only one electron, and the electron is inside the nucleus at a given moment, there will be no "between" for there to be space, empty or not.

Your doubt stems from the fact that you are using an incomplete view of what an atom is. That atomic model with the nucleus in the center and the electron zooming around in tilted circular(-ish) orbits, called the "planetary" model of the atom, is incomplete.

After the discovery of the fact that most of the mass (and the positive charge) of an atom was concentrated into a small point-like nucleus, chemists and physicists had to throw the currently prevailing model out of the window and were trying to come up with a new thing that incorporated the known facts about matter. This picture was the working idea, but it had not solidified into anything consistent because it had serious problems, mainly because they were describing the electrons with classical mechanics, since the discovery of quantum mechanics was yet to happen.

In order to resolve this apparent paradox of what exists between the electrons and the nucleus you have to shift into a quantum mechanical view of the atom.

Since you are using Rutherford's model as a starting point and because your question seem so innocent and non-professional I will assume you have no experience with the details of quantum chemistry, so I will provide an explanation based on images and allegories rather than equations and quantities. If you want me to be more detailed with the explanation, please say something in the comments and I can walk you through the bowels of the math in this particular problem.

So, it turns out even though electrons are pieces of matter, they are so small and so light that "quantum effects" start to take place. There is a lot of complicated things that go into "quantum effects" but the gist of it is that it becomes impossible to nail the electron down into one particular position and one particular classical orbit simultaneously. You can think of this as if the electron is smeared out. It becomes less like this: 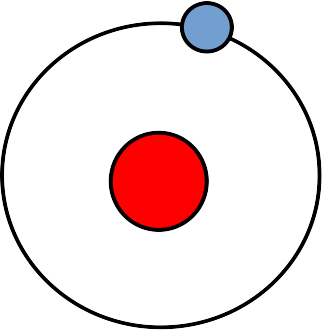 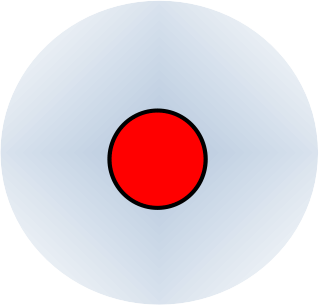 This smearing effect turns the electron into some sort of diffuse cloud. And its dynamics, that is the way it moves and the way forces act on it to change its motion, changes accordingly.

So electrons stop being point-like things that occupy certain circular orbits around the atom and start being more like cloud-like things that have certain particular shapes. Since electrons are now described as cloud-like things, it is trivial to understand that there really isn't any empty space between the nucleus and the electrons. The cloud fills the entire space and the nature of the interactions between electrons and nuclei, along with the quantum dynamics required to describe the electrons, determine the actual shape of the "electron-cloud". I hope that is sufficiently clear.

P.S. The term "electron cloud" isn't very accurate and should not be used in a setting where accurate, formal description of quantum-mechanical systems is in order. It is just an allegorical way of conveying a complicated concept in a pictorial way that can be easily envisioned with the mind's eyes.

3
What is 'space'?
1
Whats between molecules?