I had a conversation with somebody who had somewhat confused ideas about food. He thought that "all food contains sugar" and when I gave a bottle of oil as the counterexample, he said the glycerol is the sugar there.

Now let's forget for a minute that glycerol is not a sugar. The point is, glycerol is indeed a "building block" of a triglyceride, and glucose is a "building block" of glucose. But still, if you are talking about a process which needs sugar, starch won't work unless you cleave it off first. Just like starch won't spontaneously conduct electricity or emit beta radiation even though it's chock full of electrons.

Given that we have somebody with a very basic level of knowledge, and who is already trying to wrap his head around several confusing concepts at once, what would be an intuitive way to get him to really grok that, just because a given atom or group is present in the structure of a molecule, it does not mean that a substance "contains" this atom or group in the same way that a wet sponge contains water? And that without going off on a long tangent of theory?

All matter -- that is, all substances -- are made of atoms. The properties of a given substance are determined by (a) the type and (b) the arrangement of the atoms in that material.

Chemists refer to the "types" of atoms as "elements". For example, vegetable oil and table sugar (sucrose) are both composed of three types of atoms only: carbon, hydrogen, and oxygen.

The arrangement of the atoms in the two materials differs drastically. (You could refer to structure diagrams at this point if your friend is interested.) First, oil has much less oxygen and slightly more hydrogen per carbon atom. Second, the way the atoms are connected -- their arrangement -- is very different.

Chemists sometimes give a name to a group of similar arrangements of atoms. For example, "sugars" are compounds that (a) have carbon, hydrogen, and oxygen atoms in ratios that are approximately $\ce{CH2O}$, and (b) often form ring structures, as seen in table sugar, glucose, and corn starch. But the key words are "approximately" and "often" because some molecules that chemists call sugars don't satisfy these rules. Biochemists interested in metabolism sometimes refer to molecules that can "easily" be converted into "true" sugars as sugars.

Naming in chemistry is complicated by the fact that chemists use words for different purposes: to indicate metabolic similarity, to indicate structural similarity, or to indicate similarity in reactivity. Those different purposes sometimes lead situation where chemist B says that what chemist A calls a "sugar" isn't really a sugar. But that's just an argument about humans' imperfect way of naming things, not about chemistry. There is a lot of wiggle room in the words "approxiately", "often", "similar", and "easily". So if we focus on metabolism only, the glycerol part of the vegetable oil arrangement (i.e. structure) is a bit like a sugar. But it is dissimilar from sugars in terms of both structure and reactivity.

Again, what ultimately matters is (a) the type and (b) the arrangement of the atoms in a substance. Those two things are together necessary and sufficient for a complete description of all substances. Whether to call particular arrangements of particular atom types "sugars" or not is something people can argue about.

The properties of a given substance are determined by (a) the type and (b) the arrangement of the atoms in that material.

Let me add some examples to illustrate how subtle differences lead to substantial property changes any layman can experience.

Containing the same number of atoms means nothing 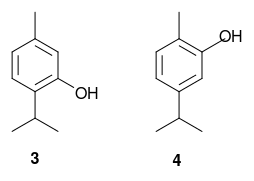 Thymene (3) and carvacrol (4) are regioisomers and only differ in the position of the $\ce{OH}$ group. However, thymene has a thyme odour, while carvacrol smells like oregano.

Compounds 5 and 6 have the same constitution and identical boiling points. They only differ in that one group is above/below the ring plane (the world isn't flat). These are (just) mirror images: enantiomers of limonene. However the interested layman will recognize they are not identical: 5 smells like lemon, while 6 smells like orange.

A layman might know that chlorine is a toxic gas and was used in the chemical warfare of WWI. Some might even know that fluorine isn't any better.

These unhealthy properties are not inherited by compounds that "contain" these elements! 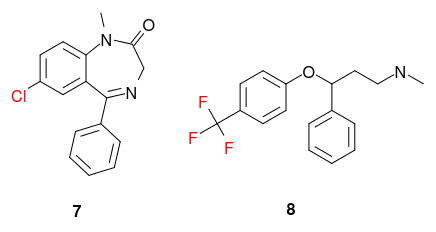 For a layman you could simply mention that airplanes contain aluminium, as do rollerskate rails.

10
Explain the formation of replicators to a layman
7
What is the difference between wet paint, dry paint, and in between those stages?
7
What is the difference between a desiccant and a deliquescent?
1
How to purify sodium chloride table salt that contains sodium ferrocyanide
2
Why And How are Unbranched chains of hydrocarbons easily biodegraded?