Non-radiative transitions or what features of rhodamine result in it being so highly fluorescent?

Rhodamine is a fluorescent dye. What features of the molecule result in it being so highly fluorescent ?

I assume the extended conjugated system with a stabilized first excited state is necessary, to absorb light in the visible region of the spectrum, and I would also think a rigid, planar structure is preferable for good Franck-Condon factors for absorption. Are there other factors involving the energy/stability of the $S_{1}$ state I should be aware of ?

Vibrational stretching of $\ce{C-C}$ bonds in substituents can significantly contribute to radiationless deactivation of an $S_1$ state and therefore reduce the fluorescence quantum yield $\Phi_F$. Admittedly, toluene isn't famous for its fluorescence ($\Phi_F = 0.15$), but the fluorescence of tert-butyl benzene is even lower ($\Phi_F = 0.03$).

Apart from radiationless deactivation through internal conversion (IC), an excited singlet state can be depopulated by intersystem crossing (ISC) to a triplet state. Under certain conditions, this is even possible for compounds that usually have very low triplet quantum yields.

Halobenzenes added to a solution of fluorescing anthracenes in dioxane (DOI) or ethyl iodide added to solutions of pyrene in alkanes (DOI) have shown to quench the fluorescence normally observed in the absence of the halogenated compounds. The latter exhibit a external heavy atom effect.

It is striking that strongly fluorescent compounds typically have an extended $\pi$-system. Here, the $S_0\rightarrow S_1$ excitation is a $(\pi,\pi^*)$ transition.

On the other side of the fence, ketones, such as acetophenone or benzophenone, hardly show fluorescence. For these compounds, $S_0\rightarrow S_1$ excitation of the $\ce{C=O}$ group is a $(n,\pi^*)$ transition. From a $^1(n,\pi^*)$ state, spin-orbit coupling can both flip the spin and move one electron to a more distant and geometrically different orbital. $S_1 \rightarrow T_1$ thus is in fact a $^1(n,\pi^*) \rightarrow {}^3(\pi,\pi^*)$ transition.

For compounds like rhodamin B in their $^1(\pi,\pi^*)$ states, the corresponding transition to a $^3(\pi,\pi^*)$ state is largely spin-forbidden ans does not occur. Provided that no external effects come into play, these molecules exhibit strong fluorescence.

The singlet to triplet intersystem crossing can only occur if there is an interaction between the two states. As these have different spin this interaction must be one that couples states and has to be coupling between spin and angular momentum, called spin-orbit coupling. This interaction is greater if heavy atoms are present in the molecule, such as iodine, or in the solvent, as in CCl$_4$.

Although the effect is greater for atoms with large atomic number it occurs in all atoms. The coupling is approx 21 times larger in chlorine than carbon and 180 times larger with Iodine. Thus with heavy atoms the fluorescence yield will be reduced compared to the same molecule with, say, H substituted for I or not dissolved in a heavy atom solvent. So we exclude these special cases and then ask what determines the fluorescence yield.

Another special case is chemical reaction, for example cis-trans isomerisation. In these cases the excited state has a small barrier on the path to products after which a conical-intersection is met and either the reactant is reformed or the product produced. We exclude such reactions in trying to explain why fluorescence yields are large or small. This still leaves molecule with no heavy atoms and no excited state chemistry and which have different fluorescence yields.

It used to be thought that flexible groups in a molecule cause low fluorescence yield. Some how the molecule shook itself into a triplet state, the ‘loose bolt’ idea. But this is not the case, for example rhodamine has at least three flexible groups attached as does 9,10-diphenylanthracene with a yield as close to 1 as its possible to get.The phenyl groups on positions 9 and 10 have torsional motion at some large angle to the three anthracene rings, thus motion here does not reduce the yield. In fact all molecules are flexible to the extent that they have vibrational normal modes which constantly distort the molecule from what we draw as, say, perfect hexagons in benzene.

The theoretical work in understanding radiationless transitions was done in the 1960’3 and 70’s (several papers by Robinson, Frosch, Siebrand, Lin, Bixon, Jortner). Understanding non-radiative processes was a major achievement in photophysics/ photochemistry but is not well known.

The rate of the non-radiative process is determined by the Fermi Golden Rule. In this method a single state is coupled to a continuum of final states. In its simplest form rate constant is given by

where $V$ is the electronic coupling energy between the two states and is proportional to spin orbit coupling in S-T transitions and to vibrational coupling in internal conversion S$_1$ to S$_0$. $F_c$ is the average Franck-Condon factor and $\rho _E$ is the number of vibrational energy levels / unit energy, or the density of states at energy $E$.

and X is the displacement of the vibration with the largest frequency $\omega$ , usually C-C and C-H vibrations, $\Delta E $ is the S-T energy gap and where $\gamma = ln(\frac{\Delta E}{\hbar \omega X} -1)$ and this typically has a value in the range 3 to 5 so can be treated as constant. This equation means that the non-radiative rate constant decays exponentially on the energy gap. 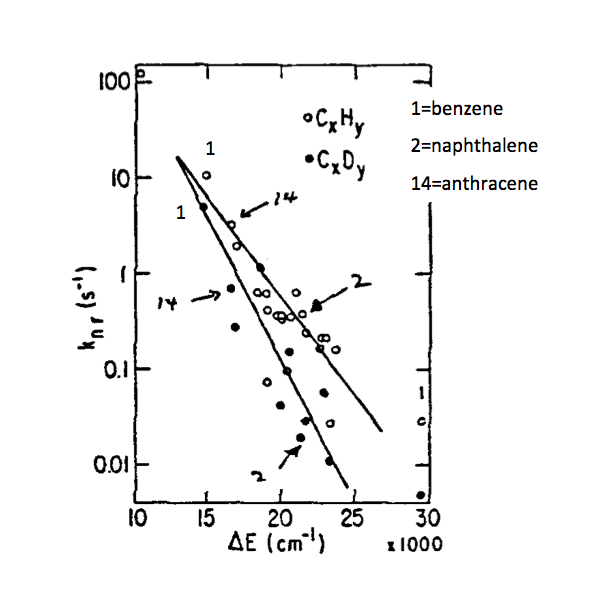 This is what is observed experimentally by choosing classes of molecules that are otherwise similar, e.g. benzene , naphthalene, anthracene, tetracene etc. Similarly the deuterated versions of these molecules have been studied and the effect of the lower frequency of CD compared to CH vibrations is clearly seen, as the deuterated species have a lower rate constant as predicted.

The same relationship has been observed in S$_2$-S$_1$ energy gap in azulene derivatives and in the energy gap in different rare earth chlorides MCl$_3$. (Azulene is an isomer of naphthalene, is blue, and has a 5 and 7 membered ring rather than two six membered rings)

Other points to note are that only some vibrational modes are important in radiationless transitions. These are called promoting modes, at least one is present and can be identified by experiment. The promoting modes are the only one with non-zero electronic coupling terms and they have zero displacement of their internuclear position between the two states, thus are asymmetrical stretch modes. There are also accepting modes in the final state. These receive the vibrational energy and are modes with a large vibrational frequency so as few of them as possible are excited to make up the energy gap. These are usually CC or CH modes.

The properties of aromatic molecules isolated from one another by low pressure in the vapour phase have also been studied. The same basic theory applies, but without having to apply the Boltzmann distribution. In this case the non-radiative rate constant increases with excitation energy in the singlet state and thus with increased energy gap. This is, however, entirely what is predicted by theory.

Hmmm, I can't think of much else. You have a conjugated, planar and rigid structure that ensures your structure doesn't change/expand much upon promotion of an electron into the antibonding orbital; hence, ensuring a good FC factor.

Possibly solvent related effects that might encourage ISC over fluoresence? I know polar solvents can encourage ISC but not sure in what chemical context and it's applicability to the particular situation.

Not the answer you're looking for? Browse other questions tagged organic-chemistry physical-chemistry photochemistry or ask your own question.

5
Why does vibrational cooling occur much faster than sponteneous emission in the condensed phase?
5
What is the explanation of the energy gap law in radiationless transitions?
3
Why is a spin change favourable in intersystem crossing?
2
Organic molecules with fast non-radiative decay rates
2
Can fluorescent & phosphorescent molecules still be fluorescent or phosphorescent as ions and not as salts?