Difference between thermodynamic and kinetic stability

What is the difference between thermodynamic and kinetic stability? I'd like a basic explanation, but not too simple. For example, methane does not burn until lit -- why?

To understand the difference between kinetic and thermodynamic stability, you first have to understand potential energy surfaces, and how they are related to the state of a system.

So, we will start with the easiest type of potential energy to understand: gravitational potential energy. This is easy for us because we live on Earth and are affected by it every day. We have developed an intuitive sense that things tend to move from higher places to lower places, if given the opportunity. For example, if I show you this picture: 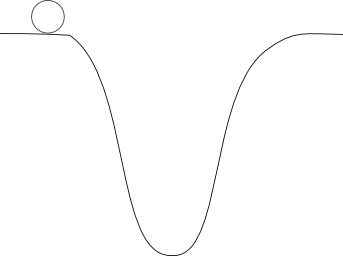 You can guess that the rock is eventually going to roll downhill, and eventually come to rest at the bottom of the valley.

However, you also intuitively know that it is not going to move unless something moves it. In other words, it needs some kinetic energy to get going.

I could make it even harder for the rock to get moving by changing the surface a little bit: 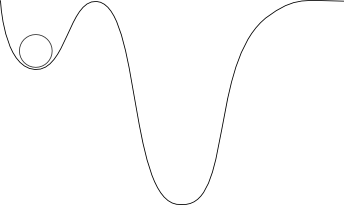 Now it is really obvious that the rock isn't going anywhere until it gains enough kinetic energy to overcome the little hill between the valley it is in, and the deeper valley to the right.

and the second derivative is positive:

In other words, the slope is zero and the shape is concave up (or convex).

The deeper valley to the right is the global minimum (at least as far as we can tell). It has the same mathematical properties, but the magnitude of the energy is lower – the valley is deeper.

If you put all of this together, (and can tolerate a little anthropomorphization) you could say that the rock wants to get to the global minimum, but whether or not it can get there is determined by the amount of kinetic energy it has.

It needs at least enough kinetic energy to overcome all of the local maxima along the path between its current local minimum and the global minimum.

If it doesn't have enough kinetic energy to move out of its current position, we say that it is kinetically stable or kinetically trapped. If it has reached the global minimum, we say it is thermodynamically stable.

To apply this concept to chemical systems, we have to change the potential energy that we use to describe the system. Gravitational potential energy is too weak to play much of a role at the molecular level. For large systems of reacting molecules, we instead look at one of several thermodynamic potential energies. The one we choose depends on which state variables are constant. For macroscopic chemical reactions, there is usually a constant number of particles, constant temperature, and either constant pressure or volume (NPT or NVT), and so we use the Gibbs Free Energy ($G$ for NPT systems) or the Helmholtz Free Energy ($A$ for NVT systems).

Each of these is a thermodynamic potential under the appropriate conditions, which means that it does the same thing that gravitational potential energy does: it allows us to predict where the system will go, if it gets the opportunity to do so.

If we look at all accessible states and decide that the one we are in has the lowest thermodynamic potential energy, then we are in a thermodynamically stable state.

However, you would have to wait a very long time for methane to react without some outside help. The reason is that the transition states along the lowest-energy reaction path have a much higher thermodynamic potential energy than the average kinetic energy of the reactants. The reactants are kinetically trapped - or stable just because they are stuck in a local minimum. The minimum amount of energy that you would need to provide in the form of heat (a lit match) to overcome that barrier is called the activation energy.

We can apply this to lots of other systems as well. One of the most famous and still extensively researched examples is glasses.

Glasses are interesting because they are examples of kinetic stability in physical phases. Usually, phase changes are governed by thermodynamic stability. In glassy solids, the molecules would have a lower potential energy if they were arranged in a crystalline structure, but because they don't have the energy needed to get out of the local minimum, they are "stuck" with a liquid-like disordered structure, even though the phase is a solid.

Kinetics deals with all things that impact the rate at which a reaction occurs. One implication of that is that reaction kinetics are partially a function of the stability of the intermediate species (and transition states) that the pathway of a chemical reaction necessarily has to pass through en route to the formation of the final product. If those intermediates are highly unstable (i.e., highly energetic) relative to the initial reactants, then the initial barrier of activation energy that must be surpassed to set the reaction in motion will be relatively high, and the reaction will tend to proceed slowly (if at all).

Thermodynamic stability, on the other hand, is strictly a function of the change in free energy (ΔG), which is a state function, meaning that its value is determined exclusively by the difference between the initial state and the final state (or the free energy of the initial products and the final products). In other words, thermodynamic stability is totally independent of the pathway between reactants and products.

While it's true that thermodynamic stability is the ultimate arbiter of the spontaneity of a reaction, if the kinetics render the reaction too slow then, in practice, the reaction may not actually occur at all (under some given set of conditions). The classic textbook example is the conversion of diamond to graphite, which is thermodynamically favorable because the free energy of graphite is lower, but doesn't occur under ordinary conditions because the kinetics of the reaction (in the form of the immense activation energy required) are extremely unfavorable.

Imagine you have some set of reactants, A + B, and there are two different pathways through which A + B can react, both of which lead to final products that are lower in free energy than the reactants A + B. Pathway #1 has much higher activation energy than Pathway #2, but the final products at the end of Pathway #1 are lower in free energy (i.e., more thermodynamically stable) than those at the end of Pathway #2. This means that Pathway #1 is thermodynamically favored, but Pathway #2 is kinetically favored (that is, it poses a lower barrier in terms of activation energy and the reaction will proceed more rapidly via this pathway). The consequence of this is that the kinetic pathway, Pathway #2, will be the favored one, unless environmental conditions (temperature, pressure, concentrations of catalysts, etc.) are tuned in a such a way that the higher activation energy of Pathway #1 can be surpassed.

In summary, thermodynamic stability (in terms of free energy difference between reactants and products) will determine whether a given reaction could be theoretically spontaneous, but kinetic factors will decide whether the reaction occurs in practice under the given environmental conditions, as well as which pathway for a given reaction takes primacy.

There is often a "reaction barrier" that needs to be overcome. Thus one must supply energy to get the reaction started, but once started it becomes self-sustaining.

One can think of it this way: one has to break bonds in a reaction before one can make bonds. Energy is needed to break the first bonds. Then making new bonds can supply enough energy to keep the reaction going.

Kinetic - how unwillingly something reacts. Thermodynamic - the energies involved, amount of gradient.

For example, aluminium metal is kinetically much more stable than iron metal in damp air (it doesn't rust), but thermodynamically much less stable (if it did oxidise, it would give out more energy)

You are thermodynamically unstable in air, but don't worry, you're not going to spontaneously combust, which is another way of saying that you are kinetically stable.

Kinetic stability refer to a pre equilibrium conditions. For example the equilibrium constant K may be very large meaning the formation of the product is favorable, but the condition is such that the reaction does not go (or goes extremely slowly) Thermodynamic stability refer to a system in which products formation is not favourable. For example we have larger reaction quotient Q.

Not the answer you're looking for? Browse other questions tagged thermodynamics kinetics stability or ask your own question.