The second step of Djerassi's synthesis of 19-nor-17α-ethynyltestosterone (norethindrone), involves the protection of the ketone in position 3 via enolether formation, as in the picture:

What is the mechanism of this reaction? I couldn't find it anywhere. I suppose it should be similar to an ether synthesis, but I'm not sure about the precise mechanism. (On a side note, I assume that the other ketone in 17 remains intact because of controlled reaction conditions.)

Usually a catalytic amount of acid is used in these reactions and they are run in the presence of alcohol (ethanol if you want to prepare the ethyl enol ether). Pyridine is typically added at the end of the reaction to recapture the acid catalyst.

The first step involves protonation of the carbonyl oxygen. Protonation of the C-3 oxygen produces a resonance stabilized carbocation where the charge is delocalized over the carbonyl and the adjacent double bond (protonation at the C-17 oxygen does not have an adjacent double bond, hence protonation at the C-3 oxygen is favored). The nucleophilic alcohol oxygen reacts at the carbonyl carbon (highest positive charge density) to produce a hemiketal. Loss of water gives rise to the enol ether product. The eliminated water is captured by the orthoformate and generates more alcohol. 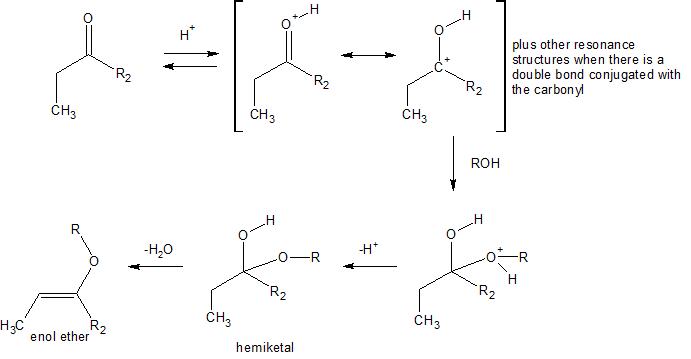 Some argue that the reaction actually proceeds through the ketal (rather than the hemiketal) since ketals can be isolated in these reactions. Others argue that just because the ketal is formed, doesn't prove it is actually involved in the enol ether formation reaction. IMO, lacking definitive evidence, I opt for the simpler hemiketal mechanism.

Not the answer you're looking for? Browse other questions tagged organic-chemistry reaction-mechanism synthesis carbonyl-compounds or ask your own question.

6
Acid-catalysed Reaction of Ketone with Benzene to Make Benzyl Alcohol
24
What is the role of sulfuric acid and mercury(II) sulfate in the oxymercuration of alkynes?
19
Mechanism of a dephenylation reaction
9
Reaction mechanism for the synthesis of 9,10-phenanthrenequinone
8
On the mechanism of the nitrogen-removal step of the Wharton olefin synthesis
9
Kolbe Schmitt followed by methylation