I am curious as to why compounds with inert gases, such as $\ce{XeF4}$, $\ce{XeF2}$, and $\ce{XeO3}$ are considered powerful oxidizing agents. I would attribute the phenomenon to the highly oxidized state of the noble gas which would be unstable but I am not too sure about it.

Xenon, being a noble gas, shouldn't like bonding too much. It already has a complete octet of outer shell (valence) electrons.

It is no wonder therefore that compounds such as xenon difluoride are used in fluorinating (oxidizing) organic molecules.

Here are some examples from Wikipedia. Why the nitro group in the second photo has been reduced to an amino group - I have no clue - and I suspect it's just an error. Further updates soon ... 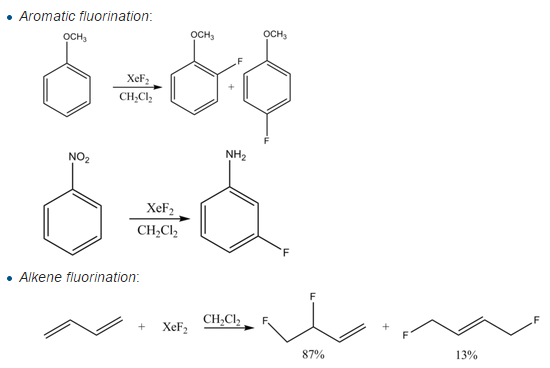 Not the answer you're looking for? Browse other questions tagged stability periodic-trends oxidation-state noble-gases or ask your own question.

5
Which argon compounds exist, supported by experiment or computation?
3
Are there natural conditions that could enable the formation of noble gas compounds?

3
Are there natural conditions that could enable the formation of noble gas compounds?
2
Terminology of redox reactions: which species are the oxidizing and reducing agents?
8
Why are there more fluoride compounds formed with Xenon?
3
Is xenon electropositive in compounds of xenon?
5
Compound with a bright green emission when electrically excited
6
Why is zinc not considered to have a noble gas configuration?