Truly Understanding the Second Law of Thermodynamics and Entropy

There are some seemingly contradictory things I’d like cleared up:

An example to work through:

In a living cell, large molecules are assembled from simple ones. Is this process consistent with the second law of thermodynamics?

First off, are we to consider the operation of a cell in this problem spontaneous? As I recall from biology, life processes require ATP, the carrier of energy, so these would technically “require external energy input,” would they not? However, the book treats it as a spontaneous process. Again, this confuses me because the definition of spontaneity is inadequate as I now semi-understand it.

Sorry for such a long post, but these are very important and fundamental ideas in spontaneity, entropy, and free energy, and I don’t want to read on until these ideas are well ingrained, and correctly so.

Be careful in citing equilibrium as an example, as it fully integrates entropy in its definition. See this article for the details, but in a spontaneous reaction the entropy is increasing, and part of reaching equilibrium is that the energy gain and loss among products and reactants is balanced. Also, most experimental reactions are (nearly) closed systems for short periods of time, and if no energy is gained or lost (again, for short periods), you can have an equilibrium where there is no change in entropy. If you let your experiment sit and the heat of the system changes (for example), the equilibrium will change as well. And eventually you end your experiment, clean out your flask, and thus increase the entropy of the universe again!

@MARamezani's comment pointing to the article on Biology looks like a good answer to your biology questions. Earth is most definitely not a close system with that giant energy source 93 million miles away.

Some concepts in thermodynamics are unclear due to historic issues.

At first: "In an equilibrium there is a spontaneous direction (the side that is favored) but the reverse reaction also occurs". Thermodinamics arised as a macroscopic subjet, in the XIX century two elemental reactions in oposite directions were not obvious. (Also, analyze your statement cautious).

You should understand "spontaneous" term in a macroscopic sense. Of course, you may find contradictions in the literature (because of the mix that have been done with macroscopic and microscopic world ¿because of pedagogical reasons?)

that the entropy change of the universe can never be negative, even though my textbook says that this is only true for spontaneous processes

The first one is refering entropy changes asociated to proceses that are real. I mean, non considering results of calculations for arbitrary proceses (which are very unprobable to happend).

About the example. As most theories, thermodynamics has applicability limits. Specially the restricted version treated in most text books. The example is invalid because of it is completely uncorrect to apply the thermodynamic of you book to a non-homogeneuos system (or a system composed by homogeneus parts). There is a strange tendency to apply thermodynamic to anything. (I do not know exactly what is your book but I can be sure of the kind of treatment because of your cites).

In the other side, there the author is trying to relate entropy with order/disorder. This is only valid for total energy constant proceses (I'm refering to the tendence to disorder). My advice is: be patient till you take a rigorous course (statistical physics or statistical thermodynamics or thermodynamics from another perspective), learn to repeat the examples for your test and forget it all as fast as you can. Or remember this taking in mind that maybe it is not exactly in this way.

If you want to start with a relatively simple but more serious thermodynamics book, you can check out this:

"Spontaneous" is being replaced in some syllabi by "thermodynamically favoured", which is a mouthful, but maybe more accurate! It means that $\Delta G < 0$ for the forward reaction, in other words, that we move to a lower $G$ if the forward reaction runs and, overall, converts some reactants to products.

We often consider this under standard conditions, where all concentrations are $1M$ so that concentration effects on the favourability of a reaction are ignored and the intrinsic stabilities of the reactants and products can be seen. This also gives us an idea of where an equilibrium will lie, to the right (mostly products) gives a large $K$ or to the left (mostly reactants) gives a small $K$. Overall the relationship is given by $$\Delta G^o = -RTlnK$$ In other words. A process will be thermodynamically favoured ($\Delta G^o < 0$) under standard conditions ($Q = 1$) if the equilibrium position is to the right of standard conditions (more products than reactants, $K > 1$).

To me, this is the real definition of "spontaneous". If a system is to the left of the equilibrium position (more reactants compared to products than we see at equilibrium) then it will naturally happen that the system will shift towards equilibrium as the forward reaction runs. This involves a decrease in $G$ as you move towards the more stable, equilibrium composition. 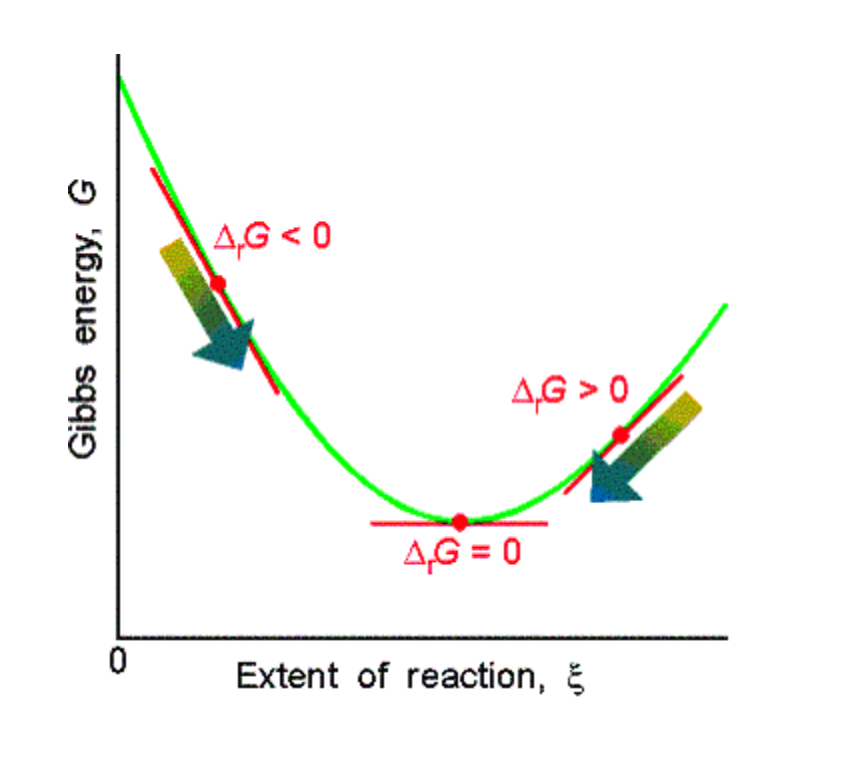 Interestingly, this phenomenon can also be seen in terms of $S$ rather than $G$. The difference is that an equilibrium position involves the highest $S_{TOT}$ as this actually corresponds to the lowest $G$. Another way of thinking of $G$ is the opposite of the entropy of the universe. Processes tend to involve $G$ decreasing and $S_{TOT}$ increasing. Either one of these can be thought of as a statement of the Second Law.

Your analysis of the kinetics is correct - if a system is shifting to the right to come to equilibrium, then $$forward~rate > reverse~rate$$ this is by definition and it explains, from a kinetics point of view, what is happening. However the overall thermodynamics depend only on the state before and after, not the path taken in terms of rates.

See if the example that you gave to work through makes any more sense now. You have all the pieces needed in order to understand it.

Not the answer you're looking for? Browse other questions tagged free-energy entropy or ask your own question.

0
Is protein folding thermodynamically favourable? If yes.. why?

5
The spontaneity of a redox reaction
9
How can enthalpy change of a system be negative while entropy change is positive?
7
How can a nonspontaneous reaction occur?
0
Why is "Spontaneous" a part of 2nd law wording?
2
Understanding entropy / spontaneity
5
Why does the Second Law of Thermodynamics hold true?
7
Feasibility and Entropy
10
Why do the first and second laws of thermodynamics not contradict each other?