When water boils into water vapor, its temperature (average kinetic energy) does not change because the inputed energy is used to break its bonds. But how does that work?

Also, in a liquid, aren’t intermolecular bonds broken and reformed constantly anyway? Why does a phase change require a time interval for breaking bonds?

In a liquid, for each IMF broken, another is made, resulting in a net change of zero.

A phase change requires a time interval because it takes time to add energy to the system.

The trivial reason that the phase change liquid to vapour takes time is that this can only occur at the surface of a liquid, but I suspect that this is not what you mean when you talk about a ‘time interval’ to break bonds. In fact time does not come into it. I try to explain what happens below. I've added some background also in case you are not familiar with it; if you are you need only read the paras around the figure.

Boiling occurs when the vapour pressure of the liquid equals the external pressure, normally 1 atm (or 1 bar; almost the same thing). To boil a liquid, energy has to be continuously suppled as molecules are escaping as vapour and taking energy away with them in doing so. (Holding a rapidly evaporating solvent feels cold). At the boiling point the temperature remains constant until all the liquid has evaporated.

The average energy a liquid or gas has at temperature T is $3k_BT/2$. Trouton’s rule states that the latent heat (enthalpy) of vaporisation is related to the boiling temperature $T_B$ as $L_{vap} /T_B \approx 80 \pu {J K^{-1}mol^{-1}}$. This borne out by many liquids, with a range of $\pu{70 - 90 J K^{-1}mol^{-1}}$; those with values greater than this range are hydrogen bonded, e.g. water, ethanol, and if less than this range, form dimers in the vapour, e.g. acetic acid. From this value the cohesive energy can be estimated and comes to $\approx 9 k_BT$. By cohesive energy is meant all the pairwise interactions between one molecule and its neighbours. Thus molecules will condense to form liquids when their cohesive energy exceeds $\approx 9 k_BT$. Thus to reverse the process, which is most quickly done by boiling, this much energy has to be supplied per molecule.

Energy is present in a molecule as both kinetic (translation plus vibrations/ & rotations ) and potential(bonds). In addition, when in a liquid there is always inter-molecular potential energy, e.g. via pairwise dispersion forces, which are always present between any atom or molecule, and dipole and induced dipole forces etc, which are generally called van-der-Waals forces. These form the cohesive energy. (We shall assume that chemical bonds are so strong that boiling does not change them which is usually the case. This makes hydrogen bonds inter-molecular bonds).

As you mention in your question inter-molecular bonds are made and broken all the time and this because there is a distribution of energies. The Boltzmann eqn. $\ce{exp}(-E/(k_BT))$ gives the chance of having energy E. This distribution of energies is also why it is possible for a liquid to evaporate at room temperature, albeit slowly compared to boiling, as a few molecules / second will randomly gain enough energy to escape the liquid.

The nature of these intermolecular forces is important. At infinite separation the intermolecular potential energy is zero, as molecules approach one another the potential energy falls (an attractive interaction) and reaches a minimum value, say, at 0.5 nm or some similar small separation which is somewhat larger than a chemical bond length. At yet smaller separation there is strong repulsion between the electrons on either molecule and the potential energy rises very rapidly. In practice ‘infinite separation’ can mean just 3 or 4 times the minimum, equilibrium separation. The shape of the inter-molecular potential typically has the form given by a Lennard-Jones or Morse equation. See the figure for a sketch, which is not to scale. 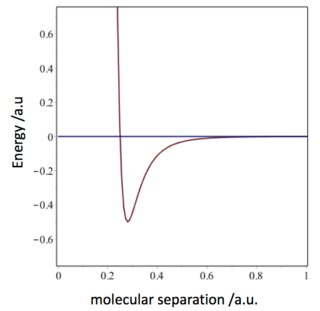 The minimum energy is negative. Note that if the intermolecular potential were harmonic in form, then liquids could never evaporate as the harmonic potential energy extends to infinity.

As the average energy increases the cohesive (intermolecular) potential energy increases also until it reaches zero and only kinetic (internal and translational, rotational) is left. The molecules can now escape the solution.
(Finally, note that a molecule has the same average kinetic energy in the liquid or vapour at the same temperature and is $3k_BT/2$. In the liquid the motion is restricted to a smaller space around the potential energy minimum than it is in the gas phase.)

Not the answer you're looking for? Browse other questions tagged phase or ask your own question.

4
Structures present in liquid water
5
How does ice melt?
5
Latent Heat and Kinetic Energy
2
Hydrogen Bonding in Water Phase Changes
2
Clarification of Kinetic Energy during Phase Change
1
If hydrogen bonds are chemical bonds, and these bonds are broken when water changes phases, why doesn't this classify as a “chemical” change?
3
Effect of doubling kinetic energy on phase transitions
1
How does the process of nucleation work for boiling liquids?
3
Vapor pressure vs. ambient pressure