How does one determine the relative basicity of a nitrogen in a molecule?

I'm trying to solve this problem:

Specifically, how does one know which nitrogen is more basic? I'm assuming that for the first molecule, that it's the nitrogen without the proton, since it seems like the other nitrogen has already been protonated (and already has acted as a base.)

Is my reasoning correct? How does one solve the other molecules?

Use a combination of 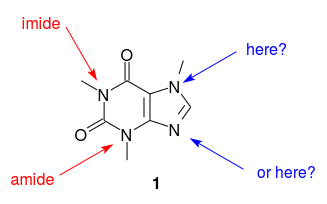 In the case of caffeine (1) the amide and the imide are rather unlikely centres for protonation! You have probably already ruled out the amide nitrogen in the benzamide case (your second molecule) in favour of the aniline site.

From an initial number of four possible centres in 1, only two remain.

Now, let's see whether the positive charge resulting from protonation can be stabilized.

This looks fair, but creates a quarternary ammonium ion for which no obvious charge distribution seems to be available.

Would you agree that this looks much more promising?

Basicity decreases with increasing stability, due to resonance/ delocalization

https://www2.chemistry.msu.edu/faculty/reusch/virttxtjml/amine1.htm (taken from this webpage)

For the first molecule for example, the double bonded nitrogen is less basic due to increasing s character (closer to nucleus, less likely to bind to H).

I think most of your examples can be reasonably thought out with these two key points.

17
How does the litmus pH indicator work?
2
How can one find products when one knows the reagents?
0
Acid-Base determination of organic compounds
0
How would I determine the relative acidity of substances?
1
Basicity of nitrogen heterocyclic compounds
8
How does Hofmann elimination work in this reaction?
0
Regarding acid-base reactions, how does one know when a hydrophobic base substance is fully protonated?