pKaH of pyridine versus other imines

Why is pyridine so much more acidic than other similar imines (5.5 versus ~9, see picture)? Wouldn't delocalization of the positive charge into the aromatic system stabilize it and hence decrease acidity? Also the lone pair of pyridine is not delocalized into the perpendicular $\pi$-system and hence not any less available than the one of the projected imine. 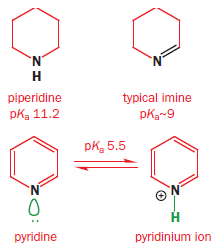 This is not a definitive answer to the question but seems to at least give the insight that the premise might not be true (i.e. pKa of typical 6-membered cyclic imine is ~9). I decided to e-mailed the main author of the book that made the above claim, prof. Jonathan Clayden. He kindly replied (if you read, many thanks!) the following:

I have been trying to find the original data for the statement that the cyclic imine (or rather its conjugate acid) has a pKa of around 9. Typically, imines have a pKa between 5 and 7, so this seems unusually high for a start. If this number is wrong then it means that pyridine may have quite a typical pKa for a cyclic imine of this type. I've not had time for a detailed search but I suspect this number may not be fully accurate. Imine pKas are notoriously hard to determine because of their hydrolytic instability.

If any additional information comes up, I will edit this answer accordingly.

Why is pyridine so much more acidic than other similar imines?

When we discuss the acidity of a compound, we are really discussing where the equilibrium between the acid and its conjugate base lies. Therefore, when we compare acidities we are really comparing equilibria, the relative stabilities of the reactant (acid) and product (conjugate base).

The following diagram illustrates the equilibrium between the iminium ion and the corresponding imine, it's conjugate base.

So, in the iminium ion - imine case

Whereas in the pyridinium ion - pyridine case

One interpretation of acidity is the ability to stabilize a negative charge (since the electron is generally kept by the acid, and the proton harbors the positive charge, if we go by bronsted lowry)

Thus, the negative charge is delocalized and thus stabilized. Its impact is not felt as greatly on one atom, and therefore it is more stable, not seeking a proton as much.

Also, the negative charge is better for nitrogen, an electronegative atom which can better stabilize it (but this doesn't explain the difference. I think the main difference is resonance)

Not the answer you're looking for? Browse other questions tagged organic-chemistry acid-base heterocyclic-compounds or ask your own question.

19
Why are lactones more acidic than esters?
38
Why is pyrimidine less basic than pyridine?
1
Numbering in phenolphthalein versus ascorbic acid
4
What happens when pyridine N-oxide reacts with dichlorocarbene?
5
Why are amidines more basic than amines?
1
Why is aniline more basic than pyrrole?
3
Make pyridine from furfural